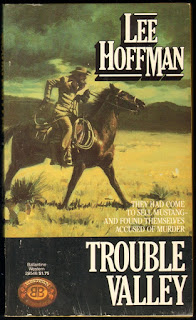 I don't know about you, but sometimes I read authors in a jag. I read most of Kurt Vonnegut's then-available novels in a string over a couple of months in the latter 1980s, having read only The Sirens of Titan (his best sf novel), Galapagos, and Cat's Cradle and the essay and short story collections beforehand, and it was time to dig in. That's how I know Bluebeard is the best of his contemporary mimetic novels, although Rosewater and the near-past historical Mother Night give it a run. I read about half of Theodore Sturgeon's collections, before the "Sturgeon Project" complete short-fiction reprints began, in the same way, having read most of the rest of Sturgeon's work sporadically over the previous two decades...and Sturgeon and Vonnegut share more than the mutual paternity of Kilgore Trout...a deep and knowing and rarely naive humanism runs through their work. As it does through the work of Ms. Lee Hoffman, RIP in 2007 and not hardly forgotten herself in several circles, but her books, if Amazon can be trusted, are almost all out of print...there's a pricey large-print edition of WILD RIDERS out, and another title coming soon in a LP edition, and her collection of essays In and Out of Quandry might still be available directly from NESFA Press, some examples of her personal journalism from her groundbreaking 1950s fanzine and elsewhere. But I read the simple majority of her 17 western novels in a jag in 1994, having read her impressive sf short story "Soundless Evening" in Again, Dangerous Visions as a kid, and having known she'd written some other impressive fantastic fiction, but was perhaps best known literarily for her western fiction...her fourth novel to be published, and first hardcover, The Valdez Horses (Doubleday, 1967), had won the Spur Award from the Western Writers of America, and had been (apparently acceptably if unexceptionally) filmed a decade later as a project for Charles Bronson and Jill Ireland. Haven't seen the film, but read the book...in fact, take on all her novels, and note how she starts out as good as anyone could want (she had already been a veteran not only of sf fan publishing, but an assistant editor at her ex Larry Shaw's magazines, and a notable zinester in the folk-music scene), in lighter or darker modes from book to book, but by her mid-1970s novels, of which Trouble Valley is one, she had achieved a practiced grace and a lean manner of slipping in the compassionate detail that helped spoil me for lesser western fiction...the protagonist of this one is not only doing his damnedest to end the conflict with his aggressive neighbors, but to do it as amicably as possible, and Hoffman delivers more tension and less melodrama, more detail to character and realistic description of human interaction than almost anyone else working in the field...this book (and its mates) read like less eccentrically-detailed Joe Lansdale westerns, or Bill Pronzini's without the slightly formal stiffness that can creep into his historical work when he lets it. Ed Gorman and Loren Estleman are in her league, too, which gives you some idea...and at least two much better-selling, largely in-print western writers couldn't come close to what she could do. But that shouldn't surprise anyone. 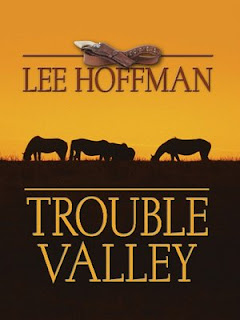 
As always, thanks to Patti Abbott for sustaining the Friday Books lists. Buy Ed Gorman (and MH Greenberg)'s new volume of best of the year crime fiction to get a sense of what she can do.

(Possibly "forgotten" music audited while writing this one: the George Russell Smalltet: Jazz Workshop [1956, RCA]...the album where Bill Evans learned about modal improvising from Russell, so he eventually could teach it to the Miles Davis group, and they did Kind of Blue as a result. Jazz Workshop's better.)
Posted by Todd Mason at 5/22/2008 11:12:00 PM

I have never read a western. Isn't that a crime? My brother made me play cowboys every night of my childhood and I swore off of them. No wait, I read True Grit if that counts. Let's blog about that next week. Top five westerns. So be ready. Thanks, Todd and for all the help.

Yep, Charles Portis definitely counts. So do Larry McMurtrey and William Van Tilburg Clark (THE OX BOW INCIDENT and THE TRACK OF THE CAT and the short stories...westerns in THE YALE REVIEW). And Sherman Alexie and Louise Erdrich. And Jorge Luis Borges and his gaucho stories and "The Other Death."

And if you haven't read everything Loren Estleman has published, the 'Ganders will git you.

You Gotta tag Bill Crider, Ed Gorman, and James Reasoner at least for a selection of Top 5 Westerns, but I suspect cries of too many potential candidates might redound.

Or even McMurtry, though I bet that McMurtrey isn't too shabby, either.