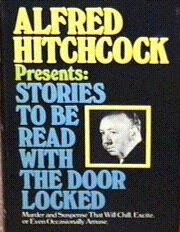 This almost certainly wasn't the first HITCHCOCK anthology that I read, but it is the first that I owned a personal copy of, a Doubleday Book Club edition. How could any young reader (I was 10 at the time) manage to not have their doors blown off by a selection such as this:

First edition:
Random House, 1975, USA.
Contains:
"Royal Jelly" by Roald Dahl
"Hijack" by Robert L. Fish
"Tomorrow and Tomorrow" by Adobe James
"Funeral in Another Town" by Jerry Jacobson
"A Case for Quiet" by William Jeffrey (Bill Pronzini and Jeffrey Wallman)
"A Good Head for Murder" by Charles W. Runyon
"The Invisible Cat" by Betty Ren Wright
"Light Verse" by Issac Asimov
"The Distributor" by Richard Matheson
"How Henry J. Littlefinger Licked the Hippies' Scheme to Take Over the Country by Tossing Pot in Postage Stamp Glue" by John Keefauver
"The Leak" by Jacques Futrelle
"All the Sounds of Fear" by Harlan Ellison
"Little Foxes Sleep Warm" by Waldo Carlton Wright
"The Graft is Green" by Harold Q. Masur
"View by Moonlight" by Pat McGerr
"There Hangs Death!" by John D MacDonald
"Lincoln's Doctor's Son's Dog" by Warner Law
"Coyote Street" by Gary Brandner
"Zombique" by Joseph Payne Brennan
"The Pattern" by Bill Pronzini
"Pipe Dream" by Alan Dean Foster
"Shottle Bop" by Theodore Sturgeon
"The Magnum" by Jack Ritchie
"Voices in the Dust" by Gerald Kersh
"The Odor of Melting" by Edward D. Hoch
"The Sound of Murder" by William P. McGivern
"The Income Tax Mystery" by Michael Gilbert
"Watch for It" by Joseph N. (aka Joe) Gores
"The Affair of the Twisted Scarf" by Rex Stout

I will have more to say about this volume and its brethren tomorrow, but right now I'm beat to the ground.

Pretty impressive group of writers. Todd, thanks for your support with this project.