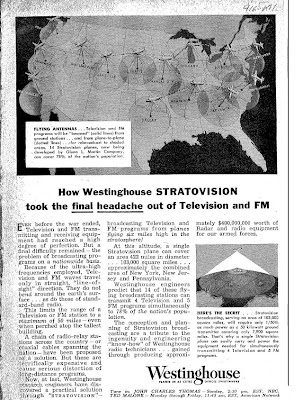 Apparently, while Stratovision wasn't ever used much in civilian circumstances, and at about the time it was being developed Arthur C. Clarke was suggesting artificial satellites might be able to do something rather similar w/o needing to be refueled and replaced as the flight crew grew weary (this ad is from the Winter, 1946 Yale Review, back when Westinghouse, along with a large slew of publishers, would advertise in a little magazine, at least Yale's), Wikipedia details its use during the Vietnam War and less impressive performance during the US bombing of the unpleasantness in Bosnia.
Posted by Todd Mason at 1/11/2010 06:15:00 PM

And it don't half look creepy...

What, you fear Stratofortresses in constant position over our larger urban areas? But these are the Engines of Democracy!