Friday's "Forgotten" Books: WAITING FOR NOTHING by Tom Kromer (Knopf, 1935) 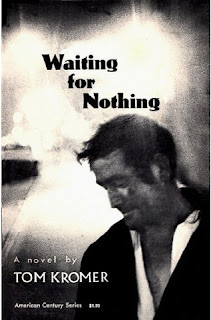 The 1968 Hill and Wang reprint, the version I have.

Well, if you're looking for another ancestor of Fawcett Gold Medal's tales of entrapment and despair in the 1950s, this autobiographical novella by Tom Kromer, largely a string of incidents taken from his life as a homeless drifter (or, constantly, a "stiff") during the Depression, will certainly do...James T. Farrell, L-F Celine, and John Steinbeck have nothing on Kromer when it comes to facing the abyss, or another night where the choices are to submit to predatory evangelists, cops (looking for short-term prison-gang labor), or self-deluding chicken-hawks, or another night in the park in the cold rain...or shooting one's self in the head, or taking the slower route by drinking diluted Sterno or straight bay rum. Told in short, choppy sentences and with a not quite completely flattened affect, and measuring the distance between those who want to put on a show of their generosity and those who are simply generous (and those who get their fleeting jollies cursing the bums who Won't Go Get A Job in an all but jobless time), it makes its point.

One wonders what became of Kromer...I'll have to look into that.

Does this edition have Kromer's original Dedication: "To Jolene, who turned off the gas"?

Wow -- harrowing just in the description. We're all a lot closer to homelessness than we'd like to imagine.

It does, George...and H&W included an autobio blurb from Kromer.

It turns out he, according to a journal article excerpted online, lived as a semi-invalid from tuberculosis from 1940 to 1969, the year after this edition was published. (Currently in print from a uni press is a corrected edition with most if not all of his known other work.)

Kate, in his bio blurb, he rather acerbically describes his gig as a schoolteacher in his home-state, West Virginia, before losing his job and starting to ride the rails.

And bootstrapping ain't ever easy, and only occasionally possible.

Reading the Carver bio, his early life, or more so, his parents' lives in the northwest working in the lumber business, doesn't sound too different.

It might even remind my parents of people they knew...though they were fortunate enough to be born toward the end of the Depression, which didn't stop a whole lot of touugh times from being visited upon them and their families. My family. Have had my own fun, too...but I wouldn't trade with Kromer.

George, yes, it does. Thank God for Jolene. I read other stuff by Kromer, and a bit of it was O.K., but he was pretty much a one-hit wonder. No mistake - he was great and I model some of my stuff after him (such as spelling everything out rather than using contractions - makes for a very deliberate-sounding presentation). What a guy!