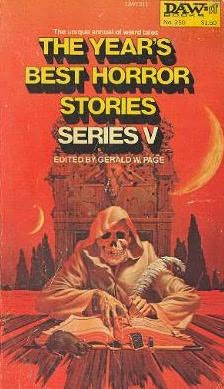 From the Contento indices:

I had been, at times feverishly, tearing through the collections and anthologies I could find in libraries and through Scholastic Book Services and bookfairs for four or five years by the time I had begun to get to go to bookstores on my own recognizance, as a not quite teen, when I happened upon this volume. Now, I knew there were mystery/crime fiction magazines and science fiction magazines still around, and even The Magazine of Fantasy and Science Fiction hadn't completely escaped my notice by 1976 and I knew it contained at least some horror fiction, but this was one of the first compelling bits of evidence that the great years of horror fiction weren't solely in the past, that there were ongoing traditions and new as well as old favorite writers still enriching the form. In fact, most of the work by the older hands, including Bloch's pleasant story, were among the slighter contributions, though Wellman's story was both solid and fine, Leiber's "Belsen Express" was suitably nasty and Ellison's "Shatterday" was fully up to what I was hoping for from him. The folks new to me, and in 1977 most not so very far along in their careers, such as Wagner, Cover, Drake, Grant and Lee were the even happier discoveries, as was my first opportunity to read H. Warner Munn, whom I'd read referred to, but not yet read...and while his story, an original in what seemed like it should be a reprint-only anthology, was more Count of Monte Cristo adventure than horror story, it was great fun.

Wagner would, of course, take up the editorial duties after Page's last volume, the seventh, and continue till his premature and unfortunate (and foreseen) death; it was only a few years ago that I learned that Page had, in the '70s, worked for TV Guide, as I did till the recentish dismemberment of that organization (my usual joke involves a misquotation of Julius Caesar--TVG, actually unlike Gaul, is now in four parts). Page's four annual volumes had followed DAW Books's reprints, rather haphazard, of two volumes of a British annual split into three annual books...and while the DAW series died with Wagner, we currently still have two annuals, those of Stephen Jones and Ellen Datlow, which continue the tradition. But this great read, along with with the First World Fantasy Awards and "Hitchcock" volumes I've already cited (and the interstitial material in Ellison's and Asimov's anthologies and collections) helped draw my to the point where I'd be participating in such fannish projects as Patti Abbott's FFB, of which further examples can be found at her blog.
Posted by Todd Mason at 1/29/2010 10:33:00 AM

It's been years since I looked at this series, but I have fond memories of this volume in particular. It's a shame the series ended with Wagner's death. And, DAW doesn't do this sort of book anymore.

Lots of unfamiliar names here but a few I recognize.

As I've read very little horror (aside from Lovecraft and Clark Ashton Smith), I was surprised to see so many familiar names in this collection.

Yes, Goerge, there weren't any bad volumes of the series, but what endeared this one particularly to you? DAW, like much of the publishing industry, is in pretty bad shape these days, and doesn't publish any anthologies aside froma a trickle of Greenbergs, as far as I've noted.

Patti--this is a not-bad, if male-heavy, cross-section of the movers and shakers, youunger and older, in horror in 1976, the year these stories were (mostly) first published. Both you and Evan might note how three of these stories were reprinted from crime-fiction magazines, and only one from a magazine that focused on horror (albeit too-closely focused on Lovecraftian horror), with small-press CHACAL and F&SF standing in for the fantasy magazines. (GALLERY is the skin mag.) Though V. 4 did reprint at least a story or two from horror magazines, the dying WITCHCRAFT AND SORCERY and the insurgent WHISPERS, the latter to be a regular source for Page and Wagner.

Evan, as all this might suggest, it wasn't too easy to survive as a writer on horror alone, and rare is the writer who doesn't think in terms of similar fields if they think in horror terms, anyway. I suspect you've read more horror than you've tagged as such in your memory.

Well, DAW did celebrate their anniversary with some Ellen Datlow and Wollheim anthos, iirc.

Notable how the larger publishers are largely getting out of the Best of the Year business across the board, aside from Houghton-Mifflin, the only ones giving their annuals any marketing push.

For the hell of it, the other three volumes Page edited from the series:

I have this volume and several of the others, but I don't have them all together on my shelves. It might be time for me to consider getting the ones I don't have and getting them organized. Judy will love that idea. More books.

I know there are people who Claim they don't believe in the endless accretion of reading materials, and recordings of other sorts, but Surely They Jest.

Great post, Todd. Personally, horror has been a less favorite genre than science fiction, mystery, fantasy, even lesser categories of fiction such as dog stories (read as a lad - no pun), adventure, and I'm sure, others which do not come to mind this instant. So, other than the Poe collection, Modern Library edition, on the shelf I don't think there is any horror on the shelves here. Not that there isn't horror in lots of science fiction, but it's not usually the complete point of the book.

I have hot-and-cold reactions to these Best Of collections in various genres, always have. I'm not sure if it's that I know a lot may have been left out, that I know my list wouldn't match the editors, if only I'd read all the candidates, or just that it seems an artificial format. The appellation "best of" doesn't mean much more than "most thrilling" or fastest-paced" might, in terms of quality or desirability.

Well, Algis Budrys enjoyed musing, particularly in the '60s, about the hype inherent in the BEST appellations, and James Blish and particularly Damon Knight did so before him somewhat more sparingly. Subjectivity is always in play...but mostly I've always treated these things as gateways to writers and publications I might've not otherwise read or known of, no matter what field of fiction (or geographical region, as that's a rising trend), even if I have read or have at hand most or a big chunk of the writers and/or magazines drawn from.