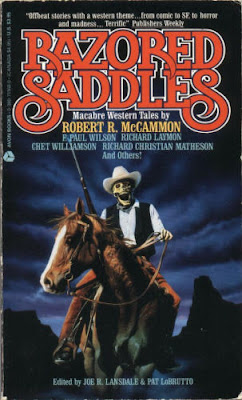 from the Contento Indices:

-punk. Cyberpunk, splatterpunk, steampunk, Paul Di Filippo was hoping to stir up some ribofunk, but that didn't have the Right Extender. Joe Lansdale, rather an unwilling occasional resident of the splatterpunk drawer, actually the best of the writers who at least moved in that colloquial, at least sometimes extremely graphic, and irreverent direction, published his seonnd western anthology in a year, after the slightly more conventional The New Frontier (Doubleday), in collaboration with Doubleday editor LoBrutto...the first of what has since been at least a small handful of western/horror crossover original anthologies. The Avon paperback is actually tagged, on its spine, "cowpunk"...a term that hasn't ever fully caught on (at least in literary circles...in music, where "splatterpunk" also made some inroads, it gained greater currency).

And, of course, when one assembles an eclectic mix of writers for an inherently eclectic anthology concept, you get some diversity in results...and a large portion of these stories aren't supernatural horror, though many of those without fantasticated elements are suspense or at least crime stories. One of the most memorable, "Eldon's Penitente" by Lenore Carroll, isn't even quite that so much as psychological study of the protagonist, and the morose burden he carries. Lansdale's own "The Job" involves two pieces of what John D. MacDonald liked to refer to as Mean Furniture, one of them an Elvis impersonator, out on a hit...I have to wonder if this story was an ancestor of "Bubba Ho-Tep" when the Elvis as Action Man nudge wouldn't leave JRL alone. Neal Barrett, Jr's "Tony Red Dog" is a contemporary western crime story about the title character, rather sharper than Lansdale's killers, who needs to extricated himself from hit contract as the target, and is perhaps the best single story in the collection.

The worst is certainly the Chet Williamson, which, like Scott Cupp's mildly diverting piece, attempts to get Big Laffs out of homosexuality in the Old West...while the Cupp makes the Alamo into a haven for homosexual liberation arrayed against the repression of Santa Anna, the Williamson posits an illustrator who is an utterly incredibly self-deluding gay man as the target of horrible abuse by two hulking monsters. But, doncha know, them gay bo's is Different. Not That different...this story has been inexplicably praised in some quarters.

Howard Waldrop and David Schow are among those who provide the kind of story one might almost expect of them, as does Lewis Shiner with an historical peice with a pointed sociological agenda. I haven't revisted Al Sarrontonio's story, but recall it as less goofy than the usual run of his work, if as eager to please. Solid contributions from the rest of the assembled, and a book which really shouldn't be out of print, as with most or perhaps even almost all the entrants in this weekly roundup...and certainly one of the least "Forgotten" of the books I've highighted.

I have a copy of this. I can't imagine a major publisher today having any interest in RAZORED SADDLES other than as an e-book. It just doesn't fit into today's "business plan."

Well, George, note that the original edition was from small press Dark Harvest, even though co-editor LoBrutto had been at Doubleday forever and held some other key positions in the industry. I suspect Avon picked it up for relative peanuts in a What The Hell mood, and at that time thought McCammon was going to be the big selling point.

Never seen this one. Some wild and crazy cowboys!

Todd - off topic, but I don't know why you can't see the post on mine, just the image. Very odd. I'll edit and re-save, if you want to check back. If still no go, hopefully the rest of the posts and the future ones will be okay.

And like the others, I'd not ever heard of this book.

I have this too -- though I haven't read all the stories. Having survived many Necon guy-ins, I am not the least bit surprised by Chet's vein of "humour".

Really a good book, pity about the closer (and I am genuinely baffled by its warm reception).