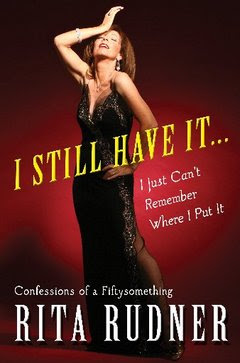 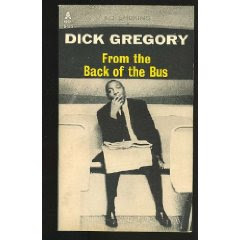 Rita Rudner's newest book has put me in the mind of all the books (or as they sometimes formerly were called, non-books) by comedians over the last fifty years or more...where you'd see the results of a stand-up comedian, well-trained in that focus, grappling with writing prose fiction or essays and even their memoirs, and not quite getting the hang of it, though credited well enough because they were often still funny, certainly usually to the audiences who were following them over to the books. For example, Woody Allen's vignettes and short stories (and what Steve Martin fiction I've read) are very much in this tradition, usually extended jokes that are relatively flat as fiction but are often at least as funny as his routines used to be; perhaps the most obvious example of memoirs that fall into this category in my early reading is Fred Allen's Treadmill to Oblivion, his relatively tired and bitter recounting of his radio and subsequent career (his other memoir, Much Ado About Me, was somewhat less bitter as it dealt mostly with his earlier career; Fred Allen's Letters is also very much worth seeking out), where much of the writing is still building to a punchline entirely too often.

So, too, I Still Have It..., though Rudner, one of the best comedians active, is both honest and witty enough to keep one reading this volume easily, even if it it simply a fleshed-out version of a number of her jokes (with single-page interlineations of some of the standalone jokes without elaboration). I'll suggest you take the "look inside" spin of the first link above rather than my pulling any particular bits out, but the book is very pleasant reading, actually touching in Rudner's memoir of her mother, and absolutely a very good (if not completely satisfying) reading experience.

One of the first books I read in this mode was Dick Gregory's From the Back of the Bus, which is basically also his routines with good, appropriate accompanying photos, mostly of Gregory in performance but some, like the cover shot, of him in comedically (and otherwise) charged poses. Another good book, if not quite the experience of reading his autobiography, Nigger, with its famous dedication to his late mother, suggesting that anytime anyone uttered the word in the future it would be an advertisement for his book...like Lenny Bruce's How to Talk Dirty and Influence People, the Gregory autobio is full of interesting and a few wrenching details (comedians often do not have the happiest of marriages), and unlike even the Bruce (despite Bruce having the help, reportedly, of Harlan Ellison and other editors at Rogue magazine for the articles that his autobio is based on), Nigger is not a primarily jokey patter in print...but From the Back of the Bus is, and is still worth the look (even if much of the patter will be familiar to any fans of Gregory's early career). The Avon edition is very reasonably-priced on the seocndhand market still (I've had a copy of that edition since the very late '70s or earliest '80s).

Well, I'm a sucker for comedians and their books though you're right that they're often little more than thin routines printed wothout the magic that makes them live on stage and screen. There's a Morecambe and Wise bio that manages to be both substantial and amusing. Ardal O'Hanlon wrote a novel -- good first novel effort though I suspect it wouldn't have got out of the slush pile without his name. Dark and funny, but the twist is easily guessed at the start. Charlie Higson has done quite well, moving from rather sinister mysteries to the Bond for kids books he's doing now.

I've always had a problem with Rudner as too much of a priss for me, tho a good turn in Peter's Friends because her character was all I associated with her anyway. But comedy is hard and even more so for women so kudos to her and her success with no reservations.

She strikes me as seeming more tightly wound than she reveals herself to be upon further exposure.

I was either kind or rushed enough to not mention such atrocious attempts at novels by comedians as Penn Gilette's SOCK. OK, rushed.

I've been told I just don't "get" humor. I'm unlikely to "get" these types of books either, because most humorists of the live punch-line variety are, s you say, poor writers. Also because they chronicle one of three things: 1) themselves, 2) their personal history in the business (see #1) or anecdotes about the business (see #1,2). The Gregory book (read, or skimmed, by me many years ago, not long after it came out) seemed a call for attention to himself more then his humor or contemporary issues. An interesting post, but not one likely to drive me to seek out and read any of he books mentioned, especially by Woody Allen, who reached his peak with EVERYTHING YOU ALWAYS WANTED TO KNOW... and all subsequent films have been boring talkfests. (That might get some response from the W. Allen lovers out there).

I think your WARREN HARDING, DEMON HUNTER comment on Bill's blog is just the most recent example of you producing, much less getting, good jokes, Rick. As with Kate, I'd suggest that the comedians aren't so much bad writers as inadequate prose writers, unless they make a serious effort (or, sometimes, were prose writers first, such as, obviously, Robert Benchley). Perhaps my less than glowing reference to the inadequacies of Woody Allen's prose scared some comment off this entry...lotsa folks want to give him a pass on just how jokily thin his stories are, for their humor when it's any good (David Sedaris is likewise given a pass for usually thin, notional stuff). Standup is akin to storytelling, and as storytellers will tell you, that's also at least as much like drama as it is like prose fiction or prose generally, dependent (as Kate also notes) on the performance.

There isn't enough text in FROM THE BACK OF THE BUS to make much more than a skimming possible, but I still enjoyed it, as another way aside from his records (and the only other way at the time it was released) for a non-wealthy or film-fanatic fan (recording kinescopes off tv, or less extremely recording tv audio with a tape deck) to have a record of some of his routines. Also, the photography is very good in some instances.

I thank you for your compliment on the humor which occasionally issues forth. On the rest, I let it lay.

TODD - please send me an email so I can update you on a change I've made. Thanks!!!