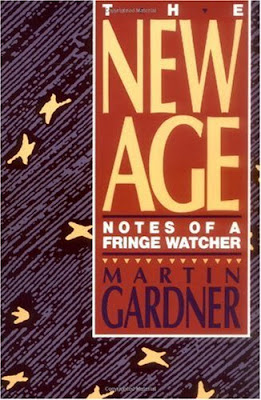 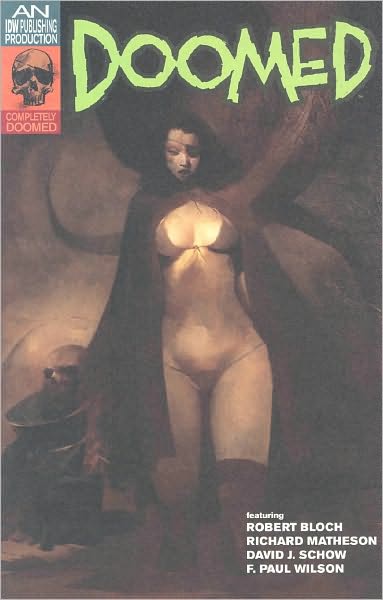 Completely Doomed, the compilation from IDW's flagship horror-anthology comic Doomed, the first one to make a splash since Harlan Ellison's partly-horror Dream Corridor a decade previously, and one more tied to "real" literary horror than any other since the Ellison or Cemetery Dance Publications' less well-received Grave Tales, is a solid Good Try...excellent art, excellent choices in the fiction adapted (horror and suspense fiction rarely rivals Robert Bloch's "Final Performance," and Richard Matheson's "Blood Son" tends to stick with one; David Schow and F. Paul Wilson are no slouches), but somehow the stories here lack the power of the fiction they're based on. The scripts may not be altogether at fault, since they have a high bar to match, in the case of most of the stories adapted here...but the comparison that most of the commenters on Amazon (another book barely in print!) make is more apt than they intend, when they note how similar Doomed is to the Warren magazines of the 1960s and 1970s, the relatively elegantly-illustrated and dully-written Creepy and Eerie, in their turn a refuge for the artists who had done such good work for the EC and other horror comics of the 1950s, often for undistinguished (or worse) scripts for those publishers, too. Such distinctive artists as Ashley Wood and Ted McKeever here do what they do very well indeed...Wood did the rather fanboy cheesecake cover, depicting the "host" of the comic, Ms. Doomed, in one of her many guises...but even that is indicative of the basic failure here...not quite Weird enough, even if it does distantly harken to the Weird Tales covers of Margaret Brundage. My copy of this one is buried in a moving box, or else I would hope to cite the name of the editor, which is rather coyly elided in the online references...Chris Ryall, as scripter, and Wood as illustrator of the adaptation of "Blood Son" were nominated for the Eisner, the most prestigious award in comics...which, I think, more than any other aspect of the enterprise helped inspire at least DC/Vertigo, their adult-oriented prestige line, to revive the very long-lived House of Mystery anthology title, and Dark Horse Comics to offer a revival of Creepy (I believe Marvel and Fantagraphics also dabbled in similar projects, without committing to new/revived horror anthologies)--it's not as if the prestige accorded Doomed was enough to keep IDW publishing the magazine...this anthology contains the entire run, if I'm not mistaken. But a worthy experiment, and worth a look for aficionados of horror and suspense fiction, or comics.

Grimmer business...in the last several weeks we've lost two writers who told engaging lies (in that both were good fiction-writers, Martin Gardner with short stories for the most part, Arthur Herzog with the reportedly surprisingly good novel The Swarm among other work--surprisingly mostly due to the rash of bad Killer Bee work produced around it, not surprising as a Herzog production)...but who were even more dear to me for their truth-seeking. The first edition of The B.S. Factor, or at least its paperback edition (the one pictured, which I have, somewhere in storage) was a very entertaining and useful book for me to come across in my youth...not quite Orwell's "Politics and the English Language," but a fine, somewhat less intense and more wide-ranging successor, sniffing out cant in many forms, and mocking it sometimes gently, usually not so gently. The New Age was a wide-ranging collection of Gardner's writing, a sequel of sorts to the unitary and consistently in-print Fads and Fallacies in the Name of Science...and at least as pleasurable a reading experience, even or perhaps because it's such a miscellany of essays, reviews and other sorts of nonfiction...more fun than his columns in Scientific American and Asimov's Science Fiction magazines in my youth (I hadn't yet quite caught up with The Skeptical Inquirer and related publications, where much of this book was first published.) May these two not be forgotten...neither the books or their authors.

For more "forgotten" books, please see Patti Abbott's blog, for the weekly roundup of participating reviewers and their nominations...
Posted by Todd Mason at 6/11/2010 12:27:00 AM

Good but not good enough, hey.

Or, better in parts than in the whole...which puts COMPLETELY DOOMED into a self-describing hole, which is a pity, since some of those parts are keepers.

That looks like a Jeff Jones cover. Looks like we've both gone with books for FFB that are "good, but not great."

Yes, though I'd still argue that mine hasn't quite been supplanted by better text...but no one should read the comics adaptations of the short stories first, I'd hasten to add. Definitely a matter of the illustrators deserved better, in both cases!

Wood's style generally is somewhat reminisent of Jones's, though less imaginative, from what I've seen.

Curiously enough, around the same time DOOMED did its comic-book version of Matheson's "Blood Son," not one but two independent short films were adapted from the same story. One was under his original title, and the other was aptly called MY AMBITION. Interested parties can read more about them in my forthcoming book RICHARD MATHESON ON SCREEN, for which IDW's Chris Ryall provided some nice comments as well.

Haven't given Creepy and Eerie a thought in many a year. Or Vampirella, for that matter. Maybe time to haul them out and stick them on eBay.

Thanks for the tip, Matthew Bradley...it's a story, even more than most Matheson stories, which strokes the young filmmaker. Good luck with what I intuit might be your book.

Evan...I suspect you won't get rich...but if you have any HELP!s, I'll make you an offer (if they aren't too trashed). I imagine you might've come across P.S. over the years, too...

Or I could refresh my memory several hours later before writing my response, when you state it's your book!

I had that same copy of the B. S. Factor.

Even with a less than stellar cover, Penguin did make sure we had some copies over here, I think...wonder who shied away from call it THE BULLSHIT FACTOR, Herzog or the publishers...