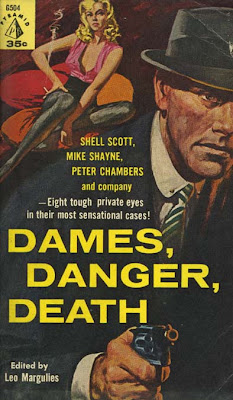 The '40s month on Rara-Avis gave me an incentive (however weak, given that most of its contents are from the legendary Manhunt magazine's heyday a decade later) to read Leo Margulies's 1960 Pyramid Books antho Dames, Danger, Death. The major 1940s entry, the only one copyrighted and probably the only one written in the '40s, is a "real" Brett Halliday (Davis Dresser) Mike Shayne story, "Death Goes to the Post," from the underappreciated Street & Smith's Detective Story Magazine in 1942 (not as literate as EQMM, nor as impressive as Black Mask or Dime Detective in their best years--but as a magazine a wide-ranging assortment of nearly all the kinds of pulp, and wartime digest, crime fiction in the issues I have read, most of those actually from a British reprint run). Unsurprisingly, this early Shayne is a hell of a lot fresher than most of the ghostwritten items hacked out for Margulies's Mike Shayne Mystery Magazine, and one can here see the seeds of Hammer and all the less-romantic children of Marlowe, the less emotionally-distant offspring of the Continental Op.

The book opens and closes with two pseudonymous stories by Salvatore Lombino, at time of writing not yet, I think, legally Evan Hunter, and only jokingly "Curt Cannon," who with "Now Die in It" offers about as deft a parody/pastiche-straddler of Hammer (from a 1953 Manhunt) as was Howard Browne's "The Veiled Woman" from a slightly earlier issue of Fantastic. "Curt Cannon" is both author and protag, doncha know, much like Ellery Queen, and he gets tied up with teenagers who run "nightclubs" of sorts out of their families' rec-rooms, and the nymphomaniac who patronizes one in particular. She, like some of Hammer's companions, can't get enough abuse-as-foreplay. It's a nice touch that this percussive fellow starts out as a down-and-out flophouse resident, reminiscent of what I've read about Barry "Mike Barry" Malzberg's later Executioner-style series, The Lone Wolf books, wherein apparently no bones are made about the protagonist being a deteriorating sociopath.

"Classification: Dead," as by Richard Marsten, is mostly notable for the depth of hatred Lombino/Hunter evinces for both abortionists and abortion as a concept. Henry Kane has a decent Peter Chambers story here, "Sweet Charlie"; Frank Kane, a more ridiculously terse attempt at an ultra-hardboiled Johnny Liddell story, "Sleep Without Dreams" (somehow, it doesn't surprise me that Liddell stories would eventually pop up in the bottom-of-the market Web Detective by the turn of the '60s). Richard Prather's Shell Scott story "Squeeze Play" bounces along as nicely as you'd expect; Richard Deming's "Optical Illusion" is disappointing when compared to his later work, which I usually enjoy, but is a solid if unexciting example of the criminal-with-scruples-and-injured-vanity taking on his rivals. Best in the book is Jonathan Craig's "A Lady of Talent," a police procedural of sorts in this book supposedly of PI stories, and the story which really gets at the urban High Lonesome of hardboiled, with a fully human touch that the others tend to lack. Perhaps because this is a Margulies antho, or so I gather from the others attributed to him and published by Pyramid at about the same time, wherein he was (and his ghost-editors were) more interested, apparently, in overlooked and interesting than in actually Good work. Nonetheless, this is a valuable core-ssmpling of the Manhunt/MSMM-style story, one of the dominant modes of short crime-fiction in the 1950s and '60s, and still influential through the various hardboiled short-fiction venues since.

Johnathan Craig was a hell of a good writer. I know those Doug Selby procedurals were his bread and butter but I this his one offs were even better and he wrote at least a dozen memorable short stories. I wish somebody would Kindle up a collection of his best ones.

You have a terrific collection of collections, Todd. Where did you get most of them? Online or does the Philly area harbor a great used bookstore?

Ed--I'll second that request...I've been meaning to look for more of his work.

Patti--I am a book-seeking device, in part...there are decent second-hand stores in Philadelphia, but there are decent ones most places, and even the rather unimpressive ones can surprise us. Library sales, online, convention hucksters, via purchaes and trades face to face and through the mail with fellow collectors, thrift stores, and buying not a few of them new and either finally getting atound to them or choosing to take another look. This one was a gift to me by a friendly acquaintance.

One of the best-stocked used stores in Philly, ReadMore, is or was in the last decade being conducted somehow as more of an archive...a dealer who couldn't bear to part with his treasure.
Another overpriced but interestingly-stocked store, Heroes, was making most of its bread from comcis, but had all sorts of fiction magazines and a fair amount of books and other magazines from decades past for sale, and was actually letting customers come see that merch. However, they've closed their actual doors and deal mostly over eBay, or at least were as of six-seven years ago.

I'm a fan of Jonathan Craig, too. The Doug Selby books are underrated. And you don't see books with titles like DAMES, DANGER, DEATH any more.

I'm not sure that last is a bad thing, George...

Great title, great cover, great pick. I've reviewed one of Craig's standalones on my blog, I think, and I'm a big fan of the Selby series.

Yes, I've been meaning to revisit this book for the roundelay for a while, even it if it isn't a first-rater.

About 30 years ago I had a copy of this one. I don't remember if I read it, or what happened to it. It's not here anywhere, that is certain. I'm not sure I'd seek it out again, given the amount of books by the favorites in this collection which ARE on my shelves.

Thanks, Rick (and Bill)...Rick, clearly I have Your copy. Never let your party guests near your library...

Whew, this looks right up my side of the street. I just made a note. Thanks Todd.