June "Forgotten" Music: the film CATCH US IF YOU CAN, The Dave Clark Five 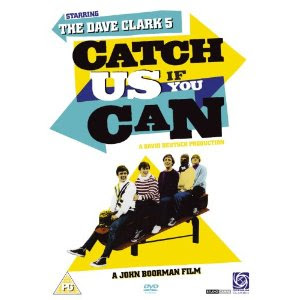 So, in late 1964/early 1965, the Dave Clark 5 were being carried along, like most British rock bands, in the wake of the Beatles in terms of international success, and were doing better than most...so a film in the mode of A Hard Day's Night seemed a natural next step. So, a youngish playwright and television writer, Peter Nichols, who would go on to Georgy Girl and A Day in the Death of Joe Egg, and an even younger tv director/producer, John Boorman, were tasked with coming up with a vehicle for the band and their songs...

...and came up with this, a rather rushed but thoughtful satire of much of what was concering the Angry Young Men and their fellow travelers in film and other media, including in a less concentrated way Richard Lester and the Beatles in the film which inspired this one. Catch Us If You Can (not usefully, but perhaps in hopes of giving the impression of more Whacky Fun than is at hand, retitled Having a Wild Weekend for US release) features Dave Clark as the most morose and aggressive of a group of young stuntmen (the band), working on an ad campaingn for butchery interests ("Meat for Go" is the unifying slogan) starring a young blonde, Dinah (Barbara Ferris), who is the not quite ensnared Trilby to the ad agency's Svengali. She and Clark's "Steve" decide to blow off work on a commercial halfway through a shoot, steal their prop Jag, and go on a road trip with agents of the advert campaign, sometimes supplemented by police, in pursuit. Steve is also smitten with Dinah, but can't quite sink himself into the romance of their lark as she does, even as they have rather jarring encounters with post-Beat proto-hippies squatting in abandoned buildings in a remote village (which are attacked by the British Army in practice raids using live ammo), a middle-aged married couple (who initially seem to be out of Edward Albee by way of The Graduate's Mrs. Robinson, but turn out to be rather less rapacious and self-deluding than that, as they host the fleeing couple and help them along), and so on to a rather realistic if perhaps overly stark ending. The film has flashes of brilliance in it, with Boorman's eye and Nichols's dialog at times putting it on par with most of the best of its era, and the performances of Yootha Joyce and Robin Bailey as the middle-aged couple almost universally praised, and with reason).

The music of the Dave Clark 5, while good, isn't as showcased as one might expect, with snatches often played rather than whole songs...and while the other members of the band are collectively present when at all, and not given too much differentiation, their performances certainly compare favorably to those of the Beatles or the other musicians required to act in their films (as opposed to the kinds of extended cameos the Zombies or the Yardbirds have in Bunny Lake is Missing or Blow Up, respectively, or the quasi-dcoumentary footage of the Stones in One Plus One. In short, none of the 5 are as bad as Lennon and McCartney often were and have been in their acting roles.)

(one for Patti Abbott particularly:)


And a Forgotten Music note:
In a project associated with WFMU, there's an ongoing attempt to name some musical cues used by the Firesign Theater in their late '60s/early '70s radio hours...a challenge to all true forgotten music fans and slans...

HURTING INSIDE by the DC5 was a favorite of mine. A B side, I think. Thanks, Todd. Seeing Philly is always fun.

As I recall, the movie got pretty good reviews when it came out. I saw it in the theater, but I don't remember too much about it.

Oh, you brought back some memories here. I'm one of those geezers old enough to recall when the Beatles, Stones, Gerry & The pacemakers, these guys wee all new.

Odd, I don't remember a film, but the title song and Glad All Over were favorites back then.

I'd been meaning to see this film for quite a few years, and finally got around (with minor difficulty) in getting a copy (which even seems a bit gray market) on dvd, and generally had liked what little DC5 music I'd heard over the years (for some reason, the oldies stations I'd hear over the years, nevr too religiously, never played too much of them), so was both surprised (though not too much, given its reputation and the talent involved offscreen--and Nichols is onscreen, too, in a typical low-budget manner, in a minor role) by the quality of the film, and moreso by how little DC5 music was licensed for the film, and how little of that is, as noted, was showcased in the film.

Randy, I'm middle-aged enough to not quite remember 1964, when I was born, but do have memories of how much worse 1970s radio got, from the beginning of that decade (though I didn't find the free-form FM stations till they were essentially gone), even though there was usually at least Something worthwhile enough to listen to (say, Steely Dan or the Spinners or Fleetwood Mac), to help make up for the BeeGees (I will never forgive "I Started a Joke"). Though at least the efflorescence of radio drama and comedy in the 1970s helped.

Bill, after 45 years, I can believe you not remembering the film at all well, but it's worth another look, even on a non-dull day. The sequences with the middle-aged couple are particularly acute, as both they and the protagonist kids display hidden depths and wit.

Yeah, Patti, given the slightness of the musical quality of the cut with the Philly postcard photos, I might've left it out...but there's a remarkable lack of CATCH US IF YOU CAN soundtrack music in linkable form, so thought I'd tweak the nostalgia thus, if it gave any sort of charge (somehow the Rocky statue probably doesn't do much of that). I'll seek out "Hurting Inside."

"Catch Me If You Can" sounds just a bit like "I Wanna Be Your Man."

People tend to forget that the Dave Clark Five were as popular as the Beatles at the beginning of the English Invasion. The Beatles managed to have more staying power.

Pretty close to the Beatles in popularity, though they only had one high-chart US hit after 1965 (manager Mickie Most, iirc, once noted about his favorite act that the three bands which had real staying power in the British Invasion were the Beatles, the Stones, and Herman's Hermits...this, of course, was sometime in the latter '60s, before the Kinks and Who managed to sustain themselves with greater and lesser success for decades).

I'd heard there was some reason I didn't come across much DC5 when I was seriously digging into 1960s rock back around the turn of the '80s...apparently Dave Clark, who owned the rights to the recordings, didn't feel he was being offered enough money for them, and they were unavailable for a good two decades in rerelease, anyway. And have been only sporadically since. Remarkable.

It was a strange little film. I wanted it to be better than it was -- halfway between the Beatle-esque romping and a Boorman-esque bigger picture idea, but not quite either. The most amazing thing was how much younger Clive Swift looked (yet still not looking 'young')!

Yes, it's definitely an unfulfilled film, not quite what it could be, but still worth seeing and as good in spots as it could be given the circumstances. I understand Boorman's never been happy with it.

And the ending is brilliant, and shows that, despite the episodic lunacy of the film, there actually was a point to it all.