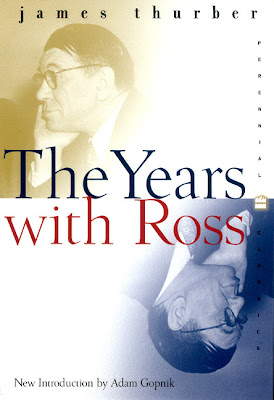 The Years with Ross is a memoir by James Thurber of his experiences, and those of the rest of the The New Yorker crew, with founding editor Harold Ross, a colorful character to say the least and one as full of seeming contradictions as H.L. Mencken, who might be his closest correspondent in American letters in their era...except that, as Thurber noted, Ross could never bring himself to write extensively for publication, after his early career in journalism.

It's also a rare example of a book in print among my entries in this series of reviews, but in discovering it was still in print (since I have the first Book-of-theMonth-Club edition from the 1950s, and first read it some twenty five years ago), I had an opportunity to read Adam Gopnick's self-congratulatory little deposit as foreward to the edition pictured here. In noting, correctly, that Thurber's Ross seems rather a comic figure (a man who consistently affected an aw-shucks Midwestern manner while running a magazine that made a point of insulting Midwesterners on occasion, in favor of presumably un-provincial NYCers at heart if not in address; a man who constantly swore yet blanched at the notion of impropriety of any sort advocated by his ostensibly sophisticated magazine; this is not a man who lacks in comic potential), Gopnick decides that he knows Thurber was merely taking Ross down a peg, and we moderns can clearly see that Thurber was merely resentful of Ross as any writer is of their editor, and today's reader doesn't care about the details of the publishing life in the '30s...what's interesting is the relation between writer and editor, even as so cleverly distorted by grumpy old Thurber-bear. I'm not getting across the full smugness of Gopnick, but it is a pretty remarkable performance, pretty amazingly echoing the sins Gopnick ascribes to Thurber only the younger man commits them less deftly. And, yes, this 21st century reader is indeed interested in the details of publishing in the 1930s, which is why I read books about publishing in the 1930s. Goodness.

But Gopnick isn't completely wrong...Thurber clearly was letting festering irritation out in much of what he wrote about Ross, but unless Thurber made up incidents out of whole cloth, one can see why he might be harboring those resentments, given the capriciousness of much of Ross's decision-making...in the manner of many great yet not consistently correct editors...who were Right even when not correct, by dint of their passion and willingness to shape their medium to fit their vision, as much as the vision of their contributors.

In short, a very useful book, as a look at both Thurber and Ross and how The New Yorker established itself, before becoming the relative bore it became under Shawn and the weathervaning creature it has been since Shawn. And Gopnick's little contribution, and the inclusion of some Thurber memos by the writer's heirs in this edition make it a slight more Interesting experience, it's true.

I read this one a gazillion years ago and really enjoyed it. I still have the tattered old paperback.

I have this, have read it a couple of times, and also the Selected Letters of James Thurber . I think you're being too harsh with Thurber, Ross and The New Yorker, but we all have our own opinions and experiences with the magazine and personalities within.

I'd also recommend the E.B. White volumes: One Man's Meat, The Letters of E. B. White The Essays of E.B. White. To me, they go hand-in-hand with this book.

I remember reading it too.

I'm not being harsh with Thurber...Gopnick is being condescending to Thurber. My opinion of Ross has been shaped largely by this book (though my memory of the lesser HERE AT THE NEW YORKER, written during the Shawn regime by a Shawn stalwart, wasn't even as backhandedly complimentary of Ross), and by similar anecdotes and accounts from others, including the famous James M. Cain resignation (Ross detailed his assistant Cain to go instruct a contributor in Social Hygiene, and Cain decided upon facing the contributor that this was the camel's back straw for him).

As for THE NEW YORKER, it's a consistently self-congratulatory magazine lo these many decades, that only infrequently deserves the credit it gives itself. This has been a constant at least since the 1970s, perhaps the only constant in the last fifteen years.

Bill, ever come across a memoir quite like it?

And I invite you all to check out the Gopnick sometime. I haven't read too many of his essays, but this one is a remarkably asinine way to introduce a book.