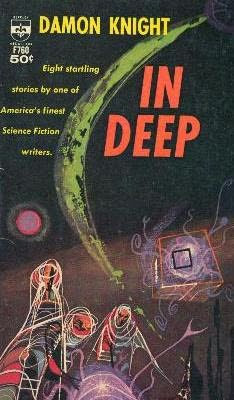 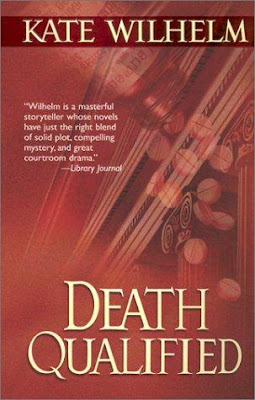 There has been no lack of brilliant writing married or at least affianced couples, ranging from Margaret Millar and "Ross Macdonald" through Mary McCarthy and Edmund Wilson through Marcia Muller and Bill Pronzini, Marijane Meaker/"Vin Packer"/"M.E. Kerr" and Patricia Highsmith to Mary Wollstonecraft and William Godwin, for fairly random selection (and the last family didn't do so badly with the family literary output in their daughter, either). But in fantastic fiction, if not solely in fantastic fiction, alongside such couples as C. L. Moore and Henry Kuttner, Leigh Brackett and Edmond Hamilton, Frederik Pohl and Judith Merril (among many other Futurian interactions), no couple has done more nor completely better than Kate Wilhelm and her late husband, Damon Knight.

So, here are two of their more brilliant books.

Death Qualified: A Mystery of Chaos, is typical of Wilhelm's work in that it gleefully breaks out of any barrier or classification that you might want to put it in. It's a crime-fiction novel, even a legal procedural in part, and the beginning of a series invovling lawyer Barbara Holloway that has become a reliably interesting and challenging set of legal procedural novels...but this one is also a borderline science-fiction novel, a borderline horror novel, has elements of sophisticated romantic fiction and is an utter tour de force as it meshes these elements as Holloway and company peel back the mystery of the death of scientist Lucas Kendricks, working on top-secret materials related to the then still relatively new field of chaos theory. It might be her most popular novel and it might be her best, so far...in a staggeringly rich and diverse career, ranging from contemporary mimetic work such as Margaret and I to suspense novels such as City of Cain to horror such as The Good Children to the influential sf novel Where Late the Sweet Birds Sang.

Damon Knight didn't branch out in fiction as much as his wife did...he was, however, perhaps the all-around best sf and fantasy short-fiction writer working in the 1950s, and while his early novels are uniformly disappointing, in his last decade he published a trilogy, beginning with CV, that demonstrated that he had mastered that form, as well. The guy who wrote the fine joke stories "To Serve Man" (the one The Twilight Zone and The Simpsons have had such fun with) and "Not with a Bang" early in his career was ready to dig deeper almost immediately afterward, and his second collection (if I recall correctly), In Deep collected some of his most brilliant work...not least the powerful and disturbing "The Country of the Kind"...a consideration of the artist's place as misfit, or the misfit's as artist if it's less discomforting, in nearly utopian circumstances. The lead-off story, "Four-in-One," is fascinatingly broken down as a product of the writing process in Knight's book Creating Short Fiction (Knight and Wilhelm were founding and key instructors of the Clarion Writers Workshop; Wilhelm's Storyteller is similarly necessary).

The Brit editions omitting the vignette "The Handler," which also deals pungently with the artist in relation to society, was a woeful error on that publisher's part. These stories, like Wilhelm's novel, are necessary reading, and while there are other Knight collections as good, there are none better.

Knight was also a pioneering critic, and not always the kindest one, and at least one talented writer and lifelong Richard Matheson fan has never forgiven Knight for his criticism of Matheson's work, particularly the quality of his prose...but Knight, nonetheless, remains a genius (I think I can say, as well) and his prose is indeed sterling and playful, as is Wilhelm's.

Patti Abbott is on vacation this week, so I've gathered up a list of the "forgotten" books for this Friday...before finally going to make my own NoirCon plunge. What I'm aware of so far:

Thanks for creating the page Todd

You're quite welcome, Kerrie...least I could do. Thanks for your consistent contributions!

You know, I don't think I've read any Damon Knight and at the very least I should be acquainted with the iconic "To Serve Man" so I have to fix that. And I had no idea they were a couple: you probably told me and it leaked out the earholes.

At the very least, you Need to read "The Country of the Kind." "To Serve Man" is a lapidary joke, a clever horror..."The Country of the Kind" is searing. "The Handler" not too shabby in either regard, and very brief. There are no bad stories in this book. "You're Another" (not in this volume, but perhaps the first Knight story I read, or the second after the similarly good "Babel-II") is not quite the absolute top-level of Knight's work, but so well-grounded in the then-present-day reality that it's lovely to behold...close enough.

Each other's second spouses, too.

Nice job hosting FFB, Todd! I wish Damon Knight had written more, but he concentrated on editing. I have a stack of Kate Wilhelm. I'll have to read one after your intriguing review.

As I suggest to Steve HL in the other post, I've at least been impressed with her novels going back to her first sf novel, THE CLONE...I haven't yet read her first crime-fiction novel, MORE BITTER THAN DEATH.

SteveHL said...
Death Qualified has the most "What the hell was that?" ending of any book I can remember; I loved it but I can see how anyone looking for a straight mystery might not. It also introduced me to the subject of fractals, which I don't think I had ever heard of before. I haven't read all that many of Wilhelm's novels and some I don't like (pretty much all the Charlie Meiklejohn and Constance Leidl books except The Hamlet Trap); others I like a lot. Like Knight, she is a fine short-story writer. I think her story "The Funeral" was the best entry in Again, Dangerous Visions, although there is some formidable competition there.


Todd Mason said...
It's almost a pity that the subsequent Barbara Holloway novels have been relatively straightforward, if good, by me...and while I have a copy of THE HAMLET TRAP and at least one other in the Meiklejohn and Leidl series, I haven't read them yet. I'm still in the all-plus column with Wilhelm's novels...if anything, WHEN LATE THE SWEET BIRDS SANG seems like one of the lesser titles in her bibliography to me, as groundbreaking (with Pamela Sargent's work) as it in exploring certain questions. I'm inclined to agree with you about "The Funeral" taking pride of place in a good lot in A, DV (the late Ms. Lee Hoffman's "Silent Evening" will kick you in the head, too)...even her first sf novel, THE CLONE (1963, iirc) with Ted Thomas (radically expanding his shorter work), might well surprise you.