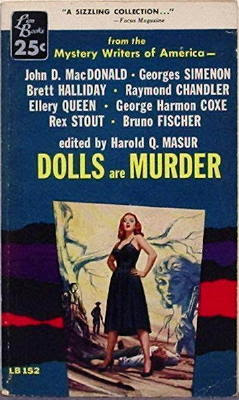 index put together from various, mostly Contento and Stephensen-Payne sources:

So here's a slim, inexpensive (even for the time) paperback with at best a misleading title (but, thoughtfully, the MWA was kind enough to leave all the women writers out of this antho), inasmuch as some of these stories, such as "Brett Halliday"'s deft excursion into "B. Traven" territory, have no women to speak of in them (oh, wait...a minor character at the beginning is killed by the father of a young woman the mc insulted...dat's a deadly dame, doncha know). Likewise, the woman character in the JDMc story is notable mostly for being the only female character, and far less deadly than several of the males; she in fact commits no murder. But it's a solid little book, filled with stories that have become at least borderline chestnuts in the succeeding years, such as the Bruno Fischer story I first read in the Hitchcock Presents: volume I FFB'd the other week, a series, I'll note (somewhat redundantly) that Masur would eventually edit after founding editor Robert Arthur died. And the book rounds out with its shortest story, published under three different titles (I'm guessing that the title here, "Cop's Gift," might've been "Rex Stout"'s preferred one), a neat if not exactly challenging little mystery set on Christmas Eve, with the typical Stout wit and eye for small details (and not a Wolfe/Goodwin story). Much as this book itself was part of a seasonal gift from Kate Laity.

I used to enjoy the MWA anthologies, but haven't read one in quiet a few years. This was a good one.

How are JDM's short stories generally? I've only read his novels.

Indeed, Jerry, despite the half-assed attempt to package it salaciously.

Cullen, MacDonald was an excellent short story writer, as well as novelist. As Bill Crider and James Reasoner might note (I think they have, and I'd agree), his revisions of his pulp-magazine stories for inclusion in such collections as THE GOOD OLD STUFF were unnecessary, to say the least. He was good from jump.

Useful gift, eh? Anything that provides content. Glad you're enjoying.

Not to mention contentment!