The following bloggers have or probably have their entries up and awaiting your persusal for this week, or will soon (more refined links to occur when possible):
Bill Crider: Cutthroat Island
Brian Arnold: Mischief
Eric Peterson: The Outfit
Evan Lewis: The Adventures of Sir Lancelot
James Reasoner: Hellfire
Jerry House: The Atomic Man aka Timeslip
K.A. Laity: The Knack...and How to Get It
Patti Abbott: Local Hero
Paul D. Brazill: Charlie Bubbles
Pearce Duncan: The Fountain of Youth
Randy Johnson: Man of the West
Scott Cupp: Dark Intruder
Scott Parker: They Were Expendable
Todd Mason: The Great American Dream Machine; Fanfare for a Death Scene; The Firesign Theatre Radio Hour

...and thanks to all who participate, reviewers and readers alike.

The Great American Dream Machine might not've been indicative of all PBS was meant to be, but it was nonetheless a pretty good start in the form of a relatively free-form, largely satirical magazine series, 90 minutes in its first short season, down to sixty for its second and final in 1971-1972, which included a mixture of animation, sketch comedy (often featuring Marshall Efron, Chevy Chase, Albert Brooks, Ken Shapiro and others, including pre-codger Andy Rooney), reportage, interview segments (including the link above to an extended Studs Terkel discussion), and generally did what it could to push boundaries for US television for its time. Reportedly, at least some of the material in the show was reshot for Shapiro and Chase's film The Groove Tube; more importantly, the series was a guiding light and launching point for such other series as Marshall Efron's Illustrated, Simplified and Painless Sunday School, and, of course, NBC's Saturday Night and its "hip" every-fourth-week slot companion, the newsmagazine Weekend. Here's a bit of Albert Brooks's "School for Comedians" film for TGADM, unfortunately as "sweetened" with a laugh track and cut short for some latter-day clip show. While no legit home video of the original series has been offered, in June, the syndicator Executive Program Services has just announced, a pledge special gathering diverse elements from the series will be offered to public television stations, and perhaps you might be lucky enough to see it in a non-pledge slot.

Television films exist in a gray area...are they really simply teleplays (many of them serve as pilots for series, perhaps more often in the past than they do now), or are they actually more like cinematic releases...since no few US television movies have been given cinematic release, abroad when not also domestically. The most famous examples of the latter include the 1964 remake of The Killers, with the famous footage of Ronald Reagan's thug character slapping Angie Dickinson's around, deemed to be too violent for broadcast in the months after the John Kennedy assassination, and several films co-financed in the 1980s and 1990s by PBS under the American Playhouse rubric, beginning with Testament. (And a number of films made in a similar funding arrangement with the likes of the UK's Channel 4, such as My Beautiful Laundrette, also saw theatrical release in the US and elsewhere). Television films have had a tendency to be bland, even when promising to revel in salacious material (hitting all the stops in notoriety from The War Game through Born Innocent to Mother May I Sleep with Danger? and Little Ladies of the Night), and shallow; only occasionally do we encounter the truly lunatic film-for-television, but some can stand proudly in this "alternative" (in the sense that Bill Pronzini applies this adjective to Harry Stephen Keeler's fiction, and others') field...and one such item is Fanfare for a Death Scene, co-written and directed by The Outer Limits creator Leslie Stevens, and one of the most joyously ridiculous crime/espionage dramas one can hope to encounter, straight out of the same well of creativity that led Stevens to also produce the only feature-length horror film in Esperanto, Incubus. Somehow, Stevens managed to get a script approved for the Kraft Suspense Theater which involves a disinterested Richard Egan seeking out a defecting scientist amidst a swirl that includes a drugged and crazed Burgess Meredith mistaking himself for Al Hirt, with the rest of the cast filled in by such stalwarts as Ed Asner, Tina Louise, Telly Savalas, Khigh Dhiegh (born Kenneth Dickerson, in the years before The Manchurian Candidate and Hawaii Five-0) and Viveca Lindfors. The climax is hilarious; the entirety of the episode/telefilm, as the only commenter on IMDb notes correctly, is surreal. It's genuinely fascinating in the way that a Stevens production gone wrong, as with several Outer Limits episodes and Incubus, can be...and you probably won't be wishing you were watching something else while it plays...and I'm happy to report that I've just discovered that Netflix is streaming this alternative classic, so that gray-market discs don't have to be relied upon. I shall have to reacquaint myself. 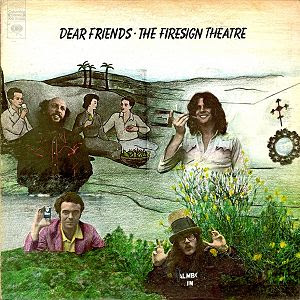 And my set of links to various comedy podcasts and webbed radio shows from a few months back needs updating and expansion; I'd like to draw particular attention to the slightly revised address for the Firesign Theatre Radio Hour archives, a pulling-together of some of the "lost" material from free-form, at times Very free-form, live radio series the Firesigns did for Pacifica Radio and "underground" commercial FM radio stations in California (and national syndication, before their Nick Danger series) around the turn of the 1970s...not usually up to the best of their work on LP, you can still hear inspired bits and much of the material on the Dear Friends double-LP set is here in context. Perhaps more useful for someone who is already a fan, who's heard Waiting for the Electrician or Someone Like Him, or Don't Crush That Dwarf, Hand Me the Pliers, or The Giant Rat of Sumatra, or even the late, underrated Eat or Be Eaten...but here's more from where that all came from.
Posted by Todd Mason at 1/25/2011 10:37:00 AM

The Great American Dream Machine always reminded me of The Ernie Kovacs Show -- hard to classify and a little ahead of its time. Some of the more informative bits stick in my memory, such as pointing out how much more valuable per ounce supermarket herbs were than gold and how a how a trash compactor can turn 25 pounds of trash into 25 pounds of trash.


Fittingly, my word verification is hyper.

My contribution to the day's festivities should be up my mid-afternoon--thanks for inviting me :) !

I swear I've seen the Brooks' bit before, but I don't remember the GADM. There was a prime time comedy show probably about that time, that might have been called "Comedy Tonight" or something like that where I first saw bits from lots of British comedy including Marty Felman's show which I suddenly remembered upon a friend giving me a DVD of those and realise I knew them already. My personal zeitgeist pointing me towards Britain from an early age. If only I'd heeded it sooner.

@Jerry -- Shout Factory has a collected DVD set of Kovacs just out now.

Jerry, Kate--the 1978 PBS retrospective series on Kovacs, though it had its faults (favoring his elaborated sight gags over his spontaneous wit, for one), helped make me a confirmed fan. The HOWDY DOODY SHOW with the Kovacs eastern European alter-ego ("What foolishness is this?") in the Buffalo Bob role and the WHAT'S MY LINE episode with Kovacs slowly exsanguinating while the panel chirps on struck me as much sharper than the Nairobi Trio or the people emerging from the bathtub.

Kate--there have been at least two national COMEDY TONIGHTs, and the CBS 1970 summer item might well've had the Feldman and other excerpts, but probably not this Brooks film, which might well've popped up any number of places without the THAT'S INCREDIBLE or FUNNIEST BITS EVER! laughtrack appended (the other was the syndicated stand-up comedians showcase series from the mid-'80s). But the local PBS station, or some ad hoc one-shot package circulated among public stations, might also have had that title not long after.

Brian--cool. I'll leave the LA LINEA link in as a sort of placeholder for now.

Nice piece, Todd. I may have seen this but it's not ringing a bell.

Thanks! Do you mean DREAM MACHINE or FANFARE? I think both would tend to linger in the memory.

What did you think of the Oscar nominations, Todd? I'm guessing either THE KING'S SPEECH or THE SOCIAL NETWORK will win BEST MOVIE.

I must admit not having much faith in the taste of the Academy, so WINTER'S BONE or even THE KIDS ARE ALL RIGHT won't win because they didn't make much money, nor did they stroke members the way THE HURT LOCKER (and the social network involved there) did. I suspect KING'S SPEECH is out as low budget AND English, two mild strikes. But if the farce goes forward, I'm all for ten Best Picture nods, inasmuch as actually worthy films slip on.

Anything else strike you, George, or anyone else, as interesting about the announcement?

All completely new to me, although I do know who Albert Brooks is!

Well, Paul, after it won an Emmy, THE GREAT AMERICAN DREAM MACHINE was imported to the UK, but as with the US viewers, you blinked and you missed it. Meanwhile, I've never actually met another person who'd seen FANFARE. And if you wanted a US intermediate stage between the Goons and Python, only more free-associational than the Goodies or even The Mighty Boosh, then the Firesigns are for you.

Just watched FANFARE on Netflix. Thanks for the recommendation. I can't say it was good but it sure was bizarre. The whole thing reminded me of a community theater version of James Bond. Apparently this was a pilot for a series that didn't sell. Too bad. I'd be up for more of Stryker's adventures.

Wow, The Goodies! I thought I was the only one I knew who ever watched them. I should never have doubted you, Todd.

I always found it funny that each episode started out with a plot, but it seemed they just gave up on it and went uncontrollably wacky toward the end, as if to say "the hell with it."

Charles (Chuck?)--Well, given it was a Stevens project, it might well've been a pilot that no one had use for and was "burned off" as an episode of KRAFT SUSPENSE THEATER...but not included in the SUSPENSE THEATER syndicated repeats package, instead sold to stations as a standalone tv movie (how it was packaged when I saw it)--that all would make sense. Definitely Pronzini's "alternative" rather than good, but gosh that climax, and Meredith's giving it his considerable All.

Indeed, Evan, not least your own. Now to settle on "forgotten" music and lit for Thursday and Friday.

Brian--well, I certainly bow to you and Kate in Goodies fandom (though I liked what I saw, if not as much as I did the Pythons, in New England as a kid), though I listen to members these days on their various BBC Radio projects.

My friend Emfinger was dating a college guy in high school (of course: she looked like Jerry Hall's better looking younger sister) and we'd hang out at his little gingerbread house and listen to Firesign Theatre and the Velvet Underground (which by that point was leftover cool, I guess, but we didn't know any better -- it was the Midwest).

True sophistication is in knowing what's still valid after it's passed out of fashion...though, of course, the Velvets were more fashionable in the late '70s than when they were initially recording. And Firesign was still going strong then, too, if not as commercially successfully as they had been five years earlier.

You may just dig some of moi's wee comedy.