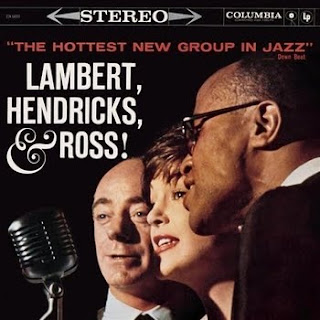 The problem with doing an entry on Lambert, Hendricks and Ross, the vocal trio which formed in 1957 while Dave Lambert and Jon Hendricks were attempting to record a choral jazz record of Count Basie charts, only to discover that only one singer among those they'd contracted for the date, the Briton Annie Ross, was fully competent as a singer in jazz idiom...the problem is that they were so immediately a hit that they did a lot of tv, for a jazz group (particularly a vocal group), and so there's a lot of raw (sometimes in the uploaded state very raw, or rather chewed over) video footage one can cite for them. It does augur that they are Not forgotten, but as their era's great popularizers of jazz "vocalizing" in the sense of singing instrumental lines, either note for note or in the same sort of improvisational lines, I have been surprised by how many people have yet to hear of them, even if they have heard them or covers of their songs (such as Annie Ross's "Twisted," which she first recorded for a solo album split with King Pleasure, another singer working in the same mode, he best remembered for his vocalized cover of James Moody's improvisation on "I'm in the Mood for Love," "Moody's Mood for Love"). (And, boy, what a plethora of impressionistic amateur animation there is for some of the videos for the trio, up on YouTube particularly.) 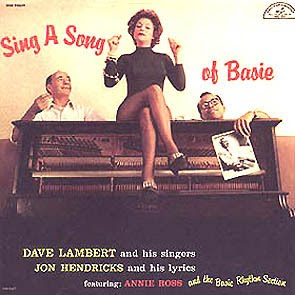 So, after recording the Basie charts album here by themselves with overdubbing and multitracking like crazy, they did some touring and an album with the Basie Orchestra, such as "Every Day I Have the Blues":


LH&R as backing singers, for Louis Armstrong: "They Say I Look Like God" (from Iola and Dave Brubeck's suite The Real Ambassadors)


Sadly, in 1962, Annie Ross had to drop out of the trio, due to illness and personal problems...a Canadian, Anne Moss, briefly filled in, then the Sri Lankan Yolande Bavan became the permanent third partner for the next two years:


In poorer fidelity (both audio, but particularly video--the initial crackle disippates), but a nice reading of "Come On Home," recorded on their third and last headlining CBS ablum by L, H & R--you might note that Bavan flubs her solo's opening, but still pulls it off (if not quite as brilliantly as Ross did); Jon Hendricks chose to leave the trio in 1964, and so the other two decided to call it a day. Sadly, Lambert was killed in a car crash in '66, while the other three continued as performers and inspirations to, most famously and obviously, the Manhattan Transfer but also to many others:


For a nice range of folk, blues, rock and soundtrack music selections, see Scott Parker's blog for the other entries this month (and feel better, Scott).
Posted by Todd Mason at 1/27/2011 06:58:00 PM

I do like that!Annie Ross is a beaut of a singer.

I've loved them for decades. I probably should append the recommendations of the Sony/Columbia three-album set, SING A SONG OF BASIE, and for the Bavan group, SWINGIN' TILL THE GIRLS GET HOME (I like their version of "Watermelon Man" very much).

I have that November 1957 recording, on CD, and it's the only L H & R music I own. I haven't listened to it a lot, and it's unavailable just now, but I'll have to give it a hearing (no pun) when it emerges. Truthfully, most of the time I'd rather listen to Manhattan Transfer. I know, not the same thing, but for vocalizations, I like them.

I could have gone without the video portion of Moanin' but it's a great song, maybe best by it's originator.

You really should give the CBS records a listen sometime, Rick...I like the BASIE albums, but I think they hit their stride when they moved on. And, of course, Manhattan Transfer all but worship L, H & R...the only MT album I have is the Jon Hendricks collaboration album...

And, yes, the amateur video for "Bijou" is even worse.