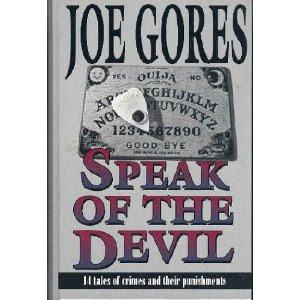 Joe Gores died the other day, and I have seen nothing but fond remembrance of him as a person, as a pro's pro, as a guiding light of a man. Of course, few run around insisting what a bastard the recently deceased might be, unless they are inarguably so, but this outpouring bespeaks of the kind of person one is utterly glad to have known. I tend, at least sometimes, not to want to disturb such folks with fan letters and such, assuming (probably incorrectly) that they might not need any more affirmation from random folks off the street. But a number of the stories collected in this volume are among the most influential fiction I've read, at very least "The Second Coming," which I read at about age ten in one of the adult Hitchcock Presents: anthologies, probably one of Harold Masur's (I could go look it up, and probably will). I hadn't thought too hard about capital punishment at that point, but was not fond of the concept; this story, about would-be hipsters thinking they're about to have a kind of strange lark in weaseling their way into being among the witnesses of a state execution, and how that experience affects them, certainly affected me. I have been a confirmed opponent since.

Other stories here have stuck with me over the decades, as well..."Watch for It" and "Goodbye, Pops" were also in AHP: volumes, and made Gores's curiously upfront name (he certainly knew how to hook up into one's gut) one to look for; I can't remember for the life of me where I first read "Quit Screaming" all those years ago. Sitting down with the Contento/Ashley and/or Stephensen-Payne indices would probably tell me that, too.

But for now, I'm just ready to buy a copy of this collection, and remind myself of some of the talent and compassion, the anger and grace of the writer we just lost. And, again, condolences to all those folks fortunate enough to know the man, as well.

My greatest obligation is to what, correctly or incorrectly, I perceive as the truth. It is also a genuine satisfaction to express the truth as you feel it should be expressed.
--John Simon, "The Art of Criticism (No.4)," The Paris Review, Spring 1997. I've recently been re-reading Movies into Film, the first John Simon book I read, and the relatively recent (and still in print) John Simon on Movies, and it remains an enjoyable and compulsive pastime...to read a critic who is not wedded to a specific ideological framework, who is so clear in esthetic judgments and open about his biases but nonetheless strives to take the work in question on its own terms...if those terms are in the pursuit of what he sees as actually achieving art, or at very least intelligently-assembled amusements. His criteria can be questioned, of course, as every Barbra Streisand idolater will insist, but not his commitment; his wit and elegance and open-mindedness are models for me that I only infrequently begin to emulate.

It’s wonderful to be hated by idiots. A German writer whom I love and whom I’ve translated, Erich Kästner, gives advice in one of his poems to a would-be suicide. He tries to give this man various reasons for not blowing his brains out. The man remains unconvinced, so Kästner says, in essence, all right, the world is full of idiots and they’re in control of everything. You fool, stay alive to annoy them! And that, in a sense, is my function in life, and my consolation. If I can’t convince these imbeciles of anything, I can at least annoy them, and I think I do a reasonably good job of that. --ibid.

As with all good critics, even when you find yourself disagreeing with his conclusions, you can see where he's coming from. He mildly enjoyed Tootsie, a film which rather bores and annoys me; he utterly dislikes The Rapture and Before Sunrise, films I see virtues in, particularly the former. But his reactions are well-explicated and only very rarely wrongheaded--there is one instance in the newer collection where he clearly misunderstood what was being suggested by the film under review, but I don't have the book at hand and don't remember which it was (I'll slip that in later), but this instance is surprising in its near-uniqueness, in my experience. More often, part of what he so very good at is in isolating what is wrong with a deeply flawed film, whether it be Midnight Run or In the Company of Men, without losing sight of their strengths; in thoroughly castigating the dishonest film, such as Smooth Talk (where the greatest dishonesty is in how it traduces the career-making short story by Joyce Carol Oates that it supposedly seeks to adapt, "Where Are You Going, Where Have You Been?") and celebrates the great, nearly perfect attempt to crystallize truth, such as Badlands. And he is not afraid to turn his analysis to the work of other critics, often demonstrating more virtues in Pauline Kael, for example, or even Andrew Sarris, than I might otherwise credit them with.

I think it's time I finally dug out his Acid Test, and picked up my own copy of Private Screenings, which I believe I've read but am uncertain. Dwight Macdonald's introduction to the first is probably worth the cost of admission in itself, or so I hope.

This reminds me I used to read collections such as this and Kael's of film criticism and I never see such volumes today.

I always enjoyed reading John Simon's reviews. Hollywood found Simon a gadfly and tried to ignore his sharp, critical reviews. But, in the end, Simon was almost always right.

You fool, stay alive to annoy them!

I need to etch that on my forehead -- no, better on my arm so I see it all the time. It may be the only thing I accomplish in this life.

I know I've read some of Simon's work, but I didn't know there were collections.

Guess I better write my FFB...

Well, Patti, I suspect we'll be seeing more of them in ebooks shortly...most of the collections of criticism I read (and occasionally FFB) today are from small presses, though James Agee, one of Simon's models, had a major collection of his filmcrit reprinted by a big commercial house about the same time as ON FILM came out, at mid-previous-decade.

Not just Hollywood, George...NEW YORK magazine fired Simon a few years ago as their drama critic because he would actually hold "legitimate" stage productions to standards, and the new editor was susceptible to pressure from the whiners (I assume more social than anything else, since even NEW YORK isn't that dependent on their advertising, making the action even more pathetic than it otherwise would be). And David Sedaris published in THE NEW YORKER at about the same time a typically fatuous parody of a Simon review, to the furtherance of Sedaris's demonstrated lack of talent and the uptick in the triviality of that consistently overrated magazine.

Indeed, Kate, though as Patti suggests the big commercial publishers last issued fat collections of Simon's critiques in the earlier 1980s...Applause produced even fatter two-decade retrospectives of film, stage and music criticism from him in 2005. Well, there are worse things than annoying fools by telling the truth.

My first Joe Gores book (Hammett) arrived just hours before I heard that he passed away.

I had the "John Simon on Film" hardcover. I read part of it and enjoyed it, but wound up selling it along with a bunch of other books to free up space in the apartment. But I'd agree with you that he's a clear writer, and his critical opinions were interesting to read and not always predictable.

Well, you don't need my recommendation of HAMMETT, but it was the first novel by Gores I read, about the time the film was announced (before it was released, and I read it not because of that but simply because I came across a copy), and it's pretty damned good, as everyone will tell you. But, then, perhaps out of affection for the novel, I even like the film better than some do (the novel is, surprise, better). I've had SPADE AND ARCHER waiting for me to get to it for several months, now...

I thought I was the only one who thought David Sedaris was insipid, Todd. Glad we share the same opinion of a guy who couldn't write a film review like John Simon's to save his life.

His sister Amy Sedaris shares his remarkable insecurity but at least has some wit about her, even if she mistakes grotesquerie for wit too often (beats her brother's confusion of inane peevishness and poorly-camouflaged resentment with wit...Andy Rooney crossed with Jim Breuer, without the excuse of being drunk).

Amy Sedaris certainly has more brain cells than her brother. She's bright, but her brand of humor is a little too grotesque to appeal to my comedic sensibilities. She's funnier in interviews.

She is even more nakedly seeking approval than most comedians, but resents that need in herself, hence, I'm quite certain, much of her default grotesqueries (considering how often both Sedarises mention how unpleasant their family life was, there may be too common other reasons why she likes to grott-up her appearance...the siblings do enjoy mentioning how much their father liked to congratulate her on her conventional prettiness, and absolutely nothing else).

As Patti says, there used to be lots of collections of film reviews. Besides Agee, Kael, and Simon, there were collections by Dwight MacDonald, Stanley Kauffmann, Andrew Sarris, Manny Farber, Otis Ferguson, Renata Adler (unfortunately)… many others. The New York Film Critics Society used to put out annual collections of reviews from all their members from the previous year. The only new ones I can recall seeing lately are Roger Ebert’s.

I agree that Simon is consistently witty but without being a "Streisand idolater", I was one of many who found his comments about actors' physical appearances frequently unnecessarily nasty. Without approving her action, I had no problem understanding why Sylvia Miles once reacted to things Simon wrote about her by dumping a plate of spaghetti on his head.

Indeed, he can be rude, even if at times, at least, it's deserved, as with the attempts to sell Streisand as a universal sexpot, as opposed to an average-looking egomaniac (but if a balding, fat Jack Nicholson is any kind of sexpot...)...Simon notes the incident with Miles in the PARIS REVIEW interview...it was steak tartare. And Miles worked the story hard.

Among the film-review books still being published by large publishers include the likes of Leonard Maltin's, and the VIDEO HOUND book (I think that one is ongoing)...but the ones I've made a point of buying over the last decade or two include HARLAN ELLISON'S WATCHING and parts of AN ENDGE IN MY VOICE...Pat Aufderheide's not published a collection, nor has Cindy Fuchs, as far as I know, but I like FEMINIST IN THE DARK by Kathie Maio...and Lucius Shepard, Kim Newman, and Michael Whedon's collections are good, even if Shepard's collections are e/virtual only...and I regularly read SIGHT AND SOUND and VIDEO WATCHDOG for the reviews, and infrequently ASIAN CULT CINEMA...

University and small presses have been the souce of nearly all the literary criticism volumes I've picked up in the last several years, with the exception of Barry Malzberg's BREAKFAST IN THE RUINS, rushed out of print by Baen.

Kathi Maio, that is, of course.