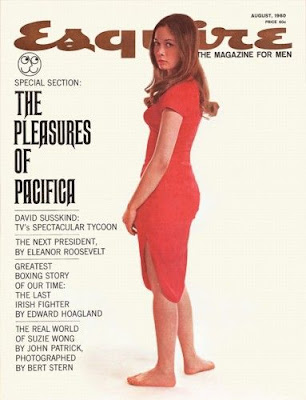 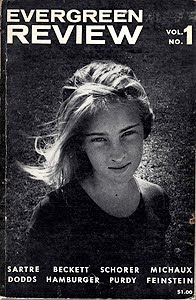 Two of the more clangorous magazines of the 1960s, I think we can all agree, were the newly energized Esquire, essentially the daddy of all the men's magazines of its era (even if the photography stayed away from the mild explicitness of Playboy and most of its imitators, Playboy having been almost an offshoot and certainly in part a response to Esquire by Esky staffer Hugh Hefner) and the ever more challenging, mildly avant-garde Evergreen Review, the rather big little magazine published by Grove Press, the more "literary" and intellectually grounded of the intertwined enterprises that also were publishing fairly adventurous, even avant-garde, porn as the Olympia Press. Though I believe The Story of O was available under both imprints. Meanwhile, very indirectly, Esquire was even a sort of daddy even to men's sweat magazines, as Argosy particularly was turning itself in the earliest 1950s from a wide-spectrum (though emphasizing adventure fiction) pulp magazine into a sort of more machismic, less ambitious version of Esquire, a policy which it maintained till its end in the 1970s (and its brief rebirth as a paleoconservative politics and lifestyle magazine)...a model that the likes of Adventure would emulate, and shortly thereafter the success of Saga and the newly sleazier (post-Ken Purdy) True would help inspire even more seedy and down-market "true" men's adventure titles. 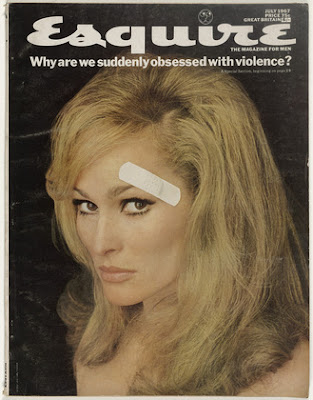 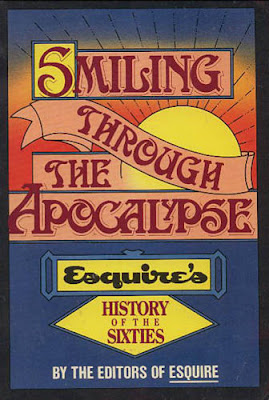 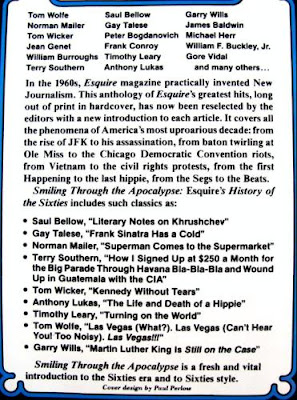 Meanwhile, back at the fathership, new editor Harold Hayes was, to say the least, livelying up the magazine starting in 1963, getting some of the best and some of the more innovative reporters and essayists to work...often taking the typically inane celebrity profile into new territory, or simply adding depth and style to it (such as Gay Talese's famous "Frank Sinatra Has a Cold," famous also in sf/fantasy circles for Talese's account of Sinatra's peevish hassling of Harlan Ellison, and Ellison's refusal to truckle causing the club management to try to eject him). Norman Mailer unsurprisingly took further opportunity to make a public ass of himself in these pages, and Gary Willis, in covering Martin Luther King, Jr. and other people and matters, found in Esquire one of his primary markets as he moved leftward away from his early work for National Review, as one of William Buckley's great discoveries.
Talese, Tom Wolfe, and other "New Journalists" got that ball rolling in one of its most widely-read fora here. It was an impressive achievement, and then suddenly in 1973, Hayes was gone and Esquire was back to being the mildly engaging, mostly trivial magazine it remains. 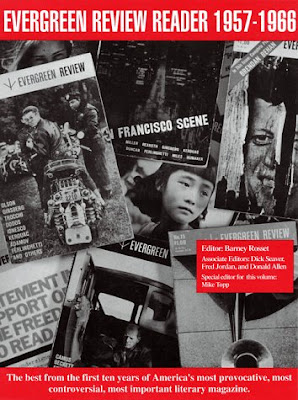 Meanwhile, as noted, Evergreen was both more self-consciously "literary" and bohemian...it was started as the kind of magazine that would publish Samuel Beckett, as well as help serve as an organ to advertise other Grove Press writers and help push the same boundaries the book imprints were striving to widen or break. After all, "Pauline Reage" was published in very explicit excerpt early on in the magazine, and not she alone, along with nude photography by Salvador Dali and others, and eventually a satiric as well as sexually semi-explicit (no genitals, a fair amount of semi-parodic misogynist perversity) serial comic, "The Adventures of Phoebe Zeit-Geist," which was very much of the mindset that scripter Michael O'Donoghue would bring to National Lampoon and Saturday Night Live, only its targets tended to be more literary and hipsterish. But Jorge Luis Borges was as much in evidence here as Terry Southern (even as Southern but not Borges was in Esquire), and Evergreen never gave up its ambition to be a first-rate literary magazine even as it also became a crusade for First Amendment rights. And mostly succeeded. And, then, in 1973, it was gone...the press 4 Walls 8 Windows has published a second Reader collecting from 1967-73. 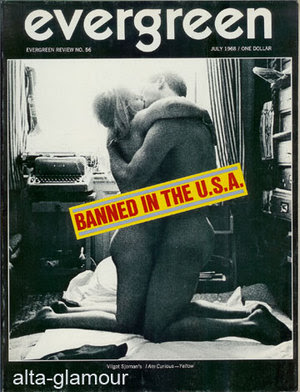 For more of today's books, please see Patti Abbott's blog. And the goofballs at Time had at least the good taste to ask Patti's daughter Megan to mention a book she's reading this summer...
Posted by Todd Mason at 7/01/2011 01:00:00 PM

I had the first two Evergreen Readers, and a subscription to the magazine, which I read almost as soon as it arrived. I make no pretense at being an intellectual, then or now, but found the contents both interesting and occasionally enlightening. Plus, of course, there was a certain level of sexiness about the thing. In contrast, I always thought of Esquire as a men's fashion and business magazine, a precursor to GQ, and it never interested me at all.

Interesting stuff -- have to run across the Evergreen ones eventually, I think.

Rick, I think you're missing a trick by not investigating at least this anthology or others like it, in re: ESQUIRE. As I note, even now, ESQUIRE can be a pleasant read, if nothing about it is groundshaking. GQ is considerably duller, rather as VANITY FAIR is (only more suits and ties in GQ, more pretentious variation on PEOPLE magazine "reportage" in VF).

Call me pretentious, but I occasionally like the view of handsome men in handsome fashions shown on the pages of GQ. But then, I'm old and easily impressionable. HA!

That doesn't make you pretentious, Yvette, so much as style-conscious (and it suggests heterosexual leanings, as well). But have you Read much of GQ over the years? The last time I bought an issue, it had a Walter Mosley short story in it, and that turned out to be disappointing.

Well, I'm not a major reader of magazine fiction. Too bad about the Mosley story. I like Mosley's FEARLESS JONES books. Have you read any of those? Great stuff.

Really the only magazine fiction I can remember reading within the last few years is from The New Yorker. And that, not that often.

But a good looking man in a great suit (or less) is always worth a look-see. :)

Well, I generally like the Mosley fiction I've read, hence my purchase of that issue (about a decade plus ago...I believe I might've been looking for reading during my one overnight in a hospital). I read a Lot of fiction in magazines, myself...though THE NEW YORKER has been pretty consistently overrated as a source for such for many decades now. It's too easy to be dissuaded if your think of that one as the cream, or even the baseline.