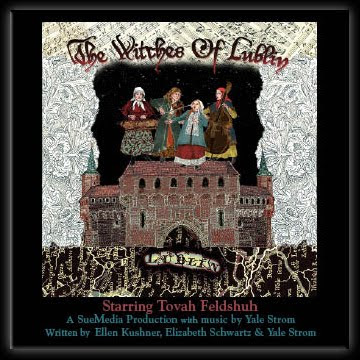 The Witches of Lublin is a radio drama with music...mostly klezmer, or proto-klezmer Middle-European Jewish folk/dance music, and a thoroughly enjoyable one. While the writing (by fantasist and radio vet Ellen Kushner, Elizabeth Schwartz and musician Yale Strom) is better than the performances of some of the cast--while Tovah Feldsuh is unsurprisingly the most impressive of the actors, Neil Gaiman as an amateur actor doesn't give the worst performance, but close--the music is consistently good (musicians: Yale Strom, composer/arranger and violin; Elizabeth Schwartz, singer; Alexander Fedoriouk, tsimbl [somewhat similar to a simpler autoharp]; "Sprocket" as bassist; Peter Stan, accordion). The story makes its points, about sexism and other sorts of chauvinism (including, unsurprisingly, Christian hostility to Jews...aspects that reminded me how much better-off we are in many ways over larger chunks of territory in the world than we have been in decades and centuries past...not to suggest that we've achieved paradise by any means, but how far we've come...).