Tuesday's Overlooked Films and/or Other A/V: the links (all have trickled in!) 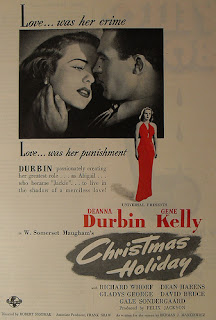 As always, thanks to everyone contributing a review or remembrance, and to all of you who are reading these (at their links below). If I've missed yours, please let me know in comments.

Bill Crider: I Married a Monster from Outer Space (trailer) 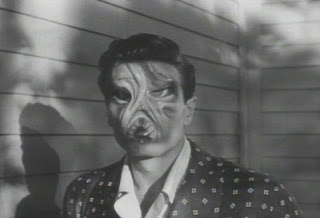 Brian Arnold: "A Case of the Stubborns" by Robert Bloch (Tales from the Darkside); Get Crazy

Iba Dawson: Woman in the Window; How to Survive a Plague

Jack Seabrook: Robert Bloch on TV: “The Greatest Monster of Them All" (Alfred Hitchcock Presents) 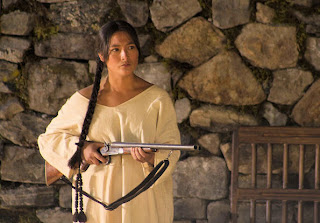 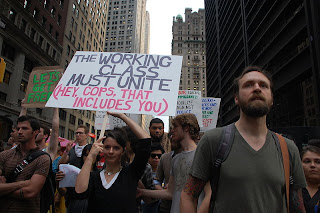 Mark Hand: Coverage of the Occupy movement and anarchism

Patti Abbott: Whistle Down the Wind 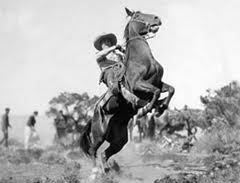 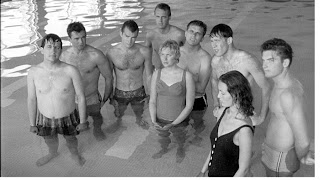 The Young Sinner, aka Like Father, Like Son, aka Among the Thorns, and with the working title We Are All Christ, is the kind of clumsy religious allegory you might expect to be written and directed by the young Tom Laughlin, with the principal shooting apparently done in 1960. Laughlin, who turned 29 that year, plays a high-school senior (yes) and football hotshot named Chris Wotan (you feel the dice being laden already, eh?) who has a steady girlfriend in Ginny (Stefanie Powers, who at least was 18 while playing a senior) with whom he supposedly has a solid, and (he admits in voice-over) playfully, romantically sexual affair, with both quite sure they will be wed soon. Good Christian's pagan temper, however, is more problematic, and gets him into Billy Jackesque beefs with petty martinets on the high-school's athletic staff, particularly after he and his similarly superannuated buddies break into the high-school's swimming pool for some goofing around with a couple of girls from the (even) richer school district up the road. Like his father, a rather well-groomed and tidy but supposedly shiftless and pathetic alcoholic, Chris's impulse control isn't quite what it should be; but Ginny has her own rather wild mood swings: extremely threatened that Chris should accept an invitation to dinner with Tury (? nomenclature not one of Laughlin's strong suits) and her family, whose father is interested in offering Chris a football scholarship to a local university, even when Ginny herself is also invited, Ginny threatens to break off their engagement if Chris goes. He does so behind her back, only to discover that perhaps Ginny's suspicions aren't so far-fetched, as Tury asks him, y'know, simply as an experiment, to "pet me; make love to me"...she wants to compare and contrast her feelings for a college boy she's been dating, with what they might be with Wotan. After checking in with Ginny (to the latter's understandable concern and upset), he goes ahead with the proposition, only to be caught by Tury's parents; Tury's father orders Chris out of the house as the camera lingers on the father getting ready to beat his terrified daughter with a belt he's looping around his hand, while Tury's mother looks mildly irritated with her in the background. 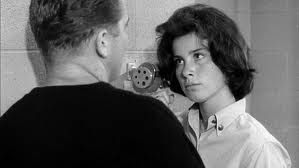 Irresistible Chris has also caught the eye of the most famous jailbait in town, 14yo Joan Meyers (Roxanne Heard, at least about 22, I'd guess), and Chris's goon friends enviously goad him into accepting her advances. Joan, too, seems to have a healthy libido which is stigmatized (perhaps 30yo high-school seniors aren't her ideal partners), but her youth and lust eventually appall Chris, particularly as her favorite makeout spot is a largely unused upstairs room in the local Roman Catholic church (another Heavy metaphor throughout this film is how abandoned that active church is, almost always). So, by the time of the wraparound events of the film, with Chris smashing some icons in the church and referring to it as a pigsty, and his long confession shortly thereafter which allows flashbacks to various incidents (a primitive nonlinear approach to the story not altogether unlike Quentin Tarantino's favorite method of script construction is employed here), he's lost his girl(s), his hope of a high-school diploma and college scholarship, and his "reputation"...but at least the progressive young priest, in less Dutch Uncle terms than the one HS athletic coach he respects, holds out hope for him to put his life back together. Thus ends this remarkably awkward, poorly-written, -directed and -acted US Angry Young (Christian) Man (well, supposedly young, anyway) drama, which was barely released in 1961 and picked up for distribution to television in 1965 (despite some relatively "strong" language, such as Chris calling Jesus et al. "bastards"...a word which was getting by the censors overseeing the series The Big Valley at about the same time probably with much wrangling and a careful hewing to its literal meaning). Shelly Manne's "score" is made up of rather hilariously tipped-in concert recordings that seem to be emanating from nowhere, not even a radio nearby, and often aren't terribly appropriate to the scene they're applied to. Aside from Laughlin's typically bootless arrogance (pun intended), and a very few cleverly arty setups for a few scenes (a despondent Chris is seen isolated between two statues in one lingering shot), there is little to recommend this film except as an example of the kind of bad-laugh variation on the AYM films (The Explosive Generation being another, the wildly overpraised earlier The Blackboard Jungle being yet another), the underside of the genre that Patti Abbott has been highlighting of late, and I, too, somewhat less consistently (I still need to write up Nobody Waved Good-Bye).

Meanwhile, the recent Barry Munday is interesting as a misfire mostly in that it has such an impressive cast (even if the eponymous protagonist is played by the just professional-enough Patrick Wilson), and it's based on a novel, Life Is a Strange Place by lawyer/writer Frank Turner Hollon, with whose work I'm unfamiliar (the Amazon blurb from the publishers, a smallish imprint, says "trumpet-wheedling father" where it means "-wielding"). Being based on a literary property never stopped drama from being offputtingly twee, of course, as is this Also Heavily Metaphoric tale of Munday, a remarkably improbable (even though pathetic) "player" and more-convincing porn aficionado, who loses his testicles after the aforementioned father even more improbably manages to walk up and smash them while Munday sits in a cinema seat next to (another!) jailbait character, the trumpet-wielder's daughter (Barret Swatek, 32yo at time of filming). Almost immediately after his release from the hospital, he finds himself the target of a paternity suit from a woman with whom he'd had a drunken, one-time tryst, which he has (almost) no memory of (she's suing, yet wants no money from him). Wacky circumstances ensue, and lessons are learned (about how testicles don't make one a Man, natch, among other rather obvious ones), particularly since Barry had no father, and (as Kate Laity can be faintly heard to be saying from somewhere in Anglophone Europe) Daddy Issues are the key to Everything, or entirely too much of everything that gets greenlit in Hollywood. But the cast here does what they can with what they have, led by Judy Greer as the suing mother (and she's supposed to be ugly, too boot...Hollywood ugly in this case being beautiful but tired-looking with slightly frazzled hair), Jean Smart as Munday's mother, Chloe Sevigny as a porn actress (or is she?) acquaintance (and Cybill Shepard and Malcolm McDowell as Sevigny's parents), and on and on, with such fine players as Colin Hanks and Christopher McDonald in small supporting roles). This film, like The Young Sinner, has earned its obscurity, but unlike the Laughlin was put together by professionals (even if it was the first feature by its director and screenplay/adapter), and it's genuinely a pity that these folks weren't given more promising material to work with. (IMDb commenters have a bit of a field day with Wilson's consistent involvement with films involving castration and impotence, including Hard Candy, Little Children, and Watchmen.) 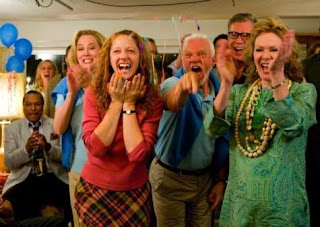 Steve's out enjoying a birthday party so I'll mention my post at MysteryFile blog.

The Files of Jeffrey Jones

And thanks for grouping all these posts together. I always find many interesting posts I might have missed otherwise.

Thanks for the dbl link love this week Todd!

Michael--how memory betrays us...I thought, but didn't doublecheck, that I'd included that one in last week's list. In it goes! Thanks.

Mine is up now, Todd.

Todd, I wasn't sure either even after checking three times. They start to all blend together. Thanks.

Again, thanks for the link, Todd.

Thanks for being so patient, Todd. This week is fast forwarding along ahead of me. Who knows when I'll catch up? :)

Well crap, I totally forgot! I'll have something new for this week very soon :)

Thanks, folks! And, Brian, you are no later than I am...Yvette, you are much more prompt!

My link is now up for this week--enjoy!

And, In, Brian! And terribly sorry about the typo (now fixed) on your name in your link, Prashant.