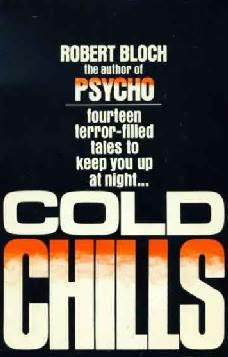 Cold Chills, Starlight, and the contents rather than an actual copy of Ship of Shadows all found me at pretty much the same time...in 1978...and as the most recent collections (at least of recent work) by each of the past masters in question, they meant a lot to me, both as appreciations of their authors' work and as encouragement to continue engaging with the fields they were so integral to.

The Bloch, for example, despite the awful Leisure Books package (the original Doubleday hardcover was little better than functional, but at least was more presentable), gathers some of his most important short fiction (such as the gentle fantasy "The Movie People" and the vicious suspense story "The Animal Fair" and the straight-up, if heavily metaphorical, science fiction I gather Bloch was most proud of among his efforts in that mode, "The Learning Maze"--though certainly "How Like a God" is comparable work) along with solid entertainments (such as the joke-story with some heft to it, "The Gods Are Not Mocked"...Bloch on bumper-sticker culture might well be extended to retweets, or the horror story "Double Whammy" which might remind you of the film Drag Me to Hell done better and more succinctly as well as decades earlier). Bloch himself seems a bit uncomfortable with the final story, "The Model," an unusually sexually graphic, for Bloch, sfnal horror story..."The Girl from Mars" made more explicit (and I wonder if the unmentioned echo of that earlier story might've bothered him at least as much as being so uncharacteristically on the, um, nose). 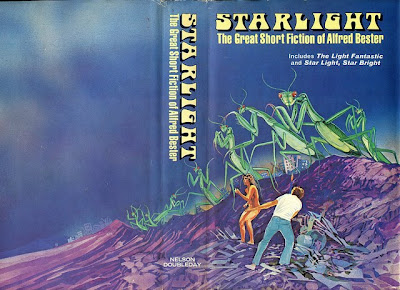 Alfred Bester's Starlight was a Science Fiction Book Club omnibus which quite sensibly combined two slender Berkley/Putnam collections, and under a less tired title than either of the original volumes. More a career retrospective (and the only one published during Bester's lifetime) than today's other books, this collection included examples of Bester as nonfiction writer (including a version of his highly engaging autobiographical essay) as well as such brilliant, affecting short fiction as "5,271,009" and "They Don't Make Life Like They Used To" (as well as his most famous short story, "Fondly Fahrenheit"...as with his first two sf novels, I rank this a notch below his best short fiction, but mine is definitely a minority opinion there). From his earliest fiction, we get the also brilliant-in-concept "Adam and No Eve" and the similarly promising and breakneck-paced, if a bit goofier, "Hell is Forever"; from his late work, such a fine example as "The Four-Hour Fugue" (two notches ahead of even his best late novels). 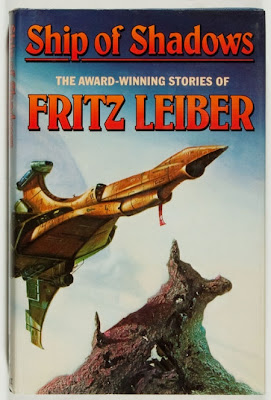 The Leiber is perhaps an unfair comparison, here...it's one brilliant story after another, with no simply good or interesting examples mixed in, but this is hardly Leiber's fault, nor any disservice to the reader (as the hardcover's subtitle notes, "The Award-Winning Stories of Fritz Leiber"--in this case, the Hugo and Nebula awards for sf and fantasy). Reaching back as far as his novella The Big Time, really a play in prose form as such critics as Algis Budrys were quick to note (with a punning title harkening to vaudeville as much as time travel and destiny), and otherwise gathering much of the best of his shorter work over the previous decade (or certainly his most widely-hailed shorter work...most with strong autobiographical aspects, and none moreso than the Fafhrd and Gray Mouser story which is in part a memorial to his recently-late wife, Jonquil, though the title-story also deals with the alcoholic spiral her death occasioned for him), the book simply is as good an introduction to Leiber as one could ask for...something also true of the Bester, for the most part, and not quite true of the Bloch, but one could do worse. So...a core sampling of the late career for Bloch, a measure of the range of short work by Bester, and the popular as well as artistic cream of Leiber (reduction of Leiber?) in that period. One could do a lot worse than any of these. 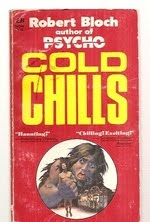 They are, indeed. I suppose the Bloch THE BEST OF and SUCH STUFF AS SCREAMS ARE MADE OF are the volumes of similar vintage most like the Leiber and the Bester, but I believe I've covered them before...and at least one person (Randy Johnson?) has reviewed the Bester omnibus, but it, like the others, is worth as many mentions as it can get.

You hit the trifecta with Bloch, Bester, and Leiber. They're three of my favorite SF writers. At one time, the Science Fiction Book Club published some great omnibus editions.

And it's pretty remarkable how much non-SF they all wrote (Bloch's crime fiction is obvious...Bester's and Leiber's crime fiction maybe a little less so...Bloch's fannish and comedy writing also just a bit less obvious, and his occasional literary criticism (James Blish was floored by Bloch's contribution to THE SCIENCE FICTION NOVEL, as you might remember)...Bester's travel writing and contemporary-mimetic novel WHO HE? and comics scripting...Leiber's science journalism, philosophical fanzinery and, of course, his book reviews...Leiber's TARZAN novel and Bloch's scripts for radio, television and film and Bester's book reviews and NEW YORKERish-casual column for CAVALIER...and so on...and if I'd added a Joanna Russ or Theodore Sturgeon or Barry Malzberg or Carol Emshwiller collection...

(SF in the speculative fiction sense, including the range of fantastic fiction, above.) The SFBC these days is more notable for original anthologies...wonder how much longer the book clubs will be around...

I'm rereading Leiber's THE BIG TIME at present. I see it has been picked for inclusion in the Library of America upcoming volumes on fifties SF. Also picked is Bester's STARS MY DESTINATION.

Speaking of Bester, his two Galaxy novels are in the running for top ten SF novels but his short fiction was just about on the same high level. Too bad HOLIDAY magazine paid him such enormous rates, as well as paying his travel expenses. SF word rates could not compare and it basically killed his fiction writing career.

I've read WHO HE(THE RAT RACE), twice and it is a compelling mystery novel with a TV and advertising background.

Charles Platt's reconstruction of his other, unfinished at death borderline crime-fiction novel, TENDER LOVING RAGE, isn't too shabby, either.

I like THE DEMOLISHED MAN better than TIGER, TIGER/THE STARS MY DESTINATION, but both seem to me to be less fully-formed, if dexterous as hell, than such short fiction as "5,271,009" or "The Men Who Murdered Mohammed".

Aside from being able to travel and be paid to deal with people who interested him, it was simply that much easier for Bester to write HOLIDAY copy and the like than his sf, at least, which took a lot more rumination and also served as his release. As with Algis Budrys, and latterly Robert Silverberg, after they, too, established their professional careers, I think for Bester the sf needed to Need to be written, after he attained full pro status, be fully worth doing. Sadly, for Bester, he lost his sinecure (as the old Curtis publishing fell apart and he couldn't see himself working with the new regime at HOLIDAY/TRAVEL/SATURDAY EVENING POST) and he didn't have the relative financial security Silverberg had established for himself...that, on top of whatever crisis his growing realization of his homosexuality foisted upon him, didn't help make his last decade all that rosy. (Budrys at least was making serious late-career bucks at Writers of the Future till he decided he wanted to separate himself from them.)

And, of course, illness didn't help Leiber, Bester, Bloch nor Budrys much in their last years. I hope to get mine out of the way now in my ?middle years, but somehow doubt I will be so fortunate.

Many writers notoriously mismanage their money. And many writers and musicians "forgot" to make those Social Security contributions when their careers were flourishing. Then, in the old age, they found their SS benefits were meager (or nonexistent).

Too often, indeed. Bloch seems to have planned well, or well enough, if not quite boasting of the kind of portfolio Silverberg amassed. Though whoever one is, I'd hate to have them depend solely on Social Security...

Todd, I found a link that I think might interest you but can't find your email address. You are lost in the shuffle of my email program, I'm afraid. Anyway, here's the link and I apologize for not being able to do live links on here for you.

Thanks, that's a pretty good selection of Powers covers...though I'd disagree that Powers is too much forgotten (and I'd say that Powers's kinship to Tanguy is vastly greater than even his to Miro or Picasso), though of course he could use more attention...and could've used more money, back when, I'm sure. (That there's an sf writer, one of those guys at the edge of the field and the edge of surfiction, named Richard Powers active now does nothing to ease confusion.)

Great choices there Todd - proud to say I have all three of these on my shelves. That Bloch cover really is awful! Of the Bester titles, I would always put 'The Men Who Murdered Mohammed' front and centre as its my personal favourite time paradox story.

"Men Who" is definitely one of the best of Bester or of that genre of story, indeed. I didn't see the Doubleday volume until years after being one of the several dozen folks to buy the yoogly Leisure edition...not particularly well-typeset, either. Do you have the D-day or LB edition of the Bloch?