FFB: WHAT REALLY HAPPENED TO THE CLASS OF '65? by David Wallechinsky and Michael Medved (Random House 1976) and related matters... 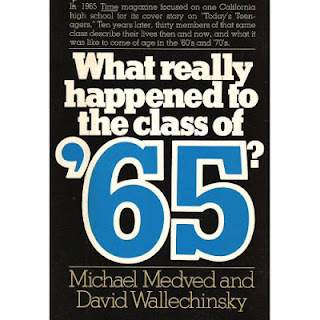 It was a surefire commercial prospect, this book...not altogether unlike the continuing British documentary series that began with 7 Up and has continued with seven-year increments since to focus on the same group of people and what has happened to them, this is the kind of book that writerly sorts can easily be drawn to...particularly when two of the members of this particular high-school graduating class, Palisades High in an affluent Los Angeles neighborhood, had already established careers for themselves as writers...and the class, in 1965, had been the subject of a typically shallow profile in Time magazine, wherein they were the metaphor for the (at least white, reasonably well-off) emerging generation of young adults.

So, Medved (still fresh off working as an aide to Ron Dellums, the stalwart Democratic Socialists of America member in the House of Representatives from California, and not yet the co-author of The Golden Turkey Awards, co-host of the even duller Sneak Previews after Siskel and Ebert quit, nor the neoconservative radio and cable-tv blowhard that he is today) and Wallenchinsky (with his father Irving Wallace and his sister Amy Wallace putting the finishing touches on The Book of Lists, after the first The People's Almanac from the team) interviewed a slew of the people they found the most compelling examples of what ten years could do to members of such a high-school graduating class, along with some questions put to all of them and a few others who didn't get their own chapters, about Vietnam, sexuality and other matters of topical and eternal interest. The book became a bestseller, Wallechinsky eventually produced a sort of sequel on his own wherein he interviewed other alumni, and there was a shortlived NBC tv series that mostly took the title and concept for a fictional dramatic anthology format.

The book is slickly-enough put together, and the experiences of some of the former classmates are pretty compelling, even when relatively few extraordinary events have occurred in their lives (the adventures of the one black male student in the class, and the one Chinese-American young woman, as outsiders before they could be known in an overwhelmingly pale Caucasian school, are among the relatively un-extreme lives, ten years on, that still manage to hold a fair amount of charge for having gone through the Palisades experience). Others had go through arguably ironic changes, others yet had simply spiraled further down the trajectories they were already on in adolescence (such as the alienated fellow who graduated early, having been skipped a grade or so in years previous, who has since become a reasonably big wheel in neo-Nazi circles, or the boosterish young woman and exchange student who was deeply thrown by experiencing less privileged circumstances abroad and had become a rudderless seeker of a more meaningful existence). A few of the fellow alumni have come out of the closet as bisexual or homosexual, in those first years of being able to reasonably safely do so, and yet others have had some very odd things happen to them indeed, including in the Vietnamese jungles and the film industry.

Not a superb book, but an eminently readable one, and a decent-enough snapshot of the authors first (of course) through their choices of interview subjects and questions, as well as of the times and the effects, again, of living in that particularly affluent and rather sheltered place...where the kinds of expectations the kids felt, to Be the Future, was constantly in the background or often in the foreground in a way that, say, the inner city high schools across the country or those in East Los Angeles would not have so readily featured (don't get killed, get yourself a job if you can, try not to get pregnant nor get her pregnant being more the default mantra in those less well-funded circumstances). As someone who attended two high schools in that four-year span in my own life, which neatly bracketed the kind of school Palisades was and probably still is (Londonderry High School in New Hampshire was a typical small but growing suburban town institution, not quite as affluent on balance as Palisades a decade-plus earlier but at least as well-funded as the school the Wiseman cinema verite High School profiled; Punahou Academy in Honolulu featured the simple majority of the wealthiest kids on the island, along with some kids sliding over the economic scale past my family's upper-middle class status to a smattering of scholarship students, including some of Polynesian ancestry who didn't end up at the subsidized and otherwise comparable Kamehameha Schools), this year has been the 30th anniversary of my graduating classes, and I've missed, without too much regret but a mild curiosity, both reunions. Writerly folk (I am one) are nosy creatures; as Vivian Gornick put it rather well in a passage I'm not going to dig back out of either Women in Science or Essays in Feminism (better than the paraphrase to follow, to be sure), writers are of course fascinated, at least as much as anyone else, by how people conduct their lives, because if they weren't interested in such Whys and Whences they wouldn't be drawn to fiction or other explication of human events, and so there's that nagging bit of business about the folks one was thrown together with even in such arbitrary and often unpleasant places as high school, even beyond the typical human concern one might feel for at least the better people one once knew. (I also took driver's ed one summer at Kailua High School, the public school I would've attended if I hadn't been at the private day school, at it was at least as much a minimum-security prison with an unenriched curriculum as nearly every underserving/underfunded urban or urbanish high school in the US.)

The television series, which counts I suppose as my tardy Overlooked entry this week, was a flier NBC, in its most dismal years commercially (even worse than now, comparatively), took on an anthology series, similarly offering fictional accounts rather than interview-based ones of the adventures of students of, in this case, a similarly fictional high school, with a '65 grad turned teacher at the school (played by Tony Bill) as host/narrator.  14 episodes of varying but mostly not-bad if uncompelling quality were aired in 1977-78, the television and school year just before my matriculation to the newly-opened/expanded Londonderry Junior/Senior HS, the show running in my second and least violent of three grade/years in the Boston 'burb...the high school had been solely a seventh and eighth grade junior high throughout the '70s before my frosh year. For my sophomore-senior years, my family decamped to Hawaii, and thus onto the former Oahu College, founded 1841. There weren't too many weekly drama anthologies left on US television in those years, as the 1970s hadn't been too kind to the form (as opposed to "Movie of the Week" telefilm packages); on commercial networks in the States, only Night Gallery, Police Story and Love, American Style had lasted more than a single season, and PBS had offered (aside from such import-driven mini-series umbrellas as Masterpiece Theatre and Mystery!) essentially, among weekly series, only the relatively shortlived Hollywood Television Theater, Visions, and The American Short Story. The last seasons of Death Valley Days in commercial syndication weren't joined by any particularly hardy projects in that arena, with the weak exception of the dramatic episodes of the religious series Insight, though a number of multi-season series would proliferate in syndication in the '80s. While the '65 series was no great shakes, its nearly total absence from repeat packages or home video in the decades since is almost odd.  The opening theme (not the credit sequence) can be heard below...a bit whinier than I remembered, but a catchy-enough song.

For more of today's books (and probably no other tv series) please see Patti Abbott's blog.

Todd, I give you a lot of credit for giving this book an honest go.

Did you read it, Ron? Did it bug you, or is it more Medved in later life? He was (unsurprisingly) the kind of guy who might easily go neocon from early in life...smug, certain of his own much greater intelligence than the rabble, etc.

I first read it when I was in high school, and have picked it up for a light look-over a couple of times in the years since...

I must admit, the Medved imprimature (so to speak) would put me off, but I have really enjoyed the various examples of 7 UP series (for lack of a better term) over the decades and this does sound very inetresting. Had no idea about the Wallace connection - thanks Todd.

Never read it and, to be honest, the Palisades is what cools any interest I'd have in the book. Tho I have a friend who lives there, the reverse snob in me compels me to search elsewhere for reading matter about the grown up youth of LA. Can't read most of Carolyn See's novels either. I'm short-sighted that way.