Tuesday's Overlooked Film and/or Other A/V: late for Xmas links

Happy Xmas, Xians (and all those of other persuasions, such as myself)! Rather tardily, but 'tis a day off and I'm feeling lazy, here are the links to today's list of a/v reviews and citations (both often leading to online streaming of the items under discussion), with a few in for their festive colors (such as green), when the blogger in question has taken a break for the holiday. May your day continue to be merry and bright, and all your Xmases multicolored (or in fine, crisp b&w).

Bill Crider: Being There [trailer]

Ivan G. Shreve, Jr.: You Bet Your Life and other Julius Marx on the radio...

Rick: Daughter of the Mind; The Birdmen (The ABC Movies of the Week)

Sergio Angelini: Ghosts of Christmas Past

Stephen Gallagher: Valley of Lights and The Hidden

Todd Mason: "Fanfare for a Death Scene" (the unsold pilot for the series Stryker) (available on Netflix and Amazon streaming) 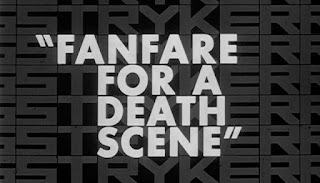 One of the most insane things I remember seeing on television in my early adolescence was a random catch of this busted pilot, from the same Daystar Productions that were responsible for the original series of The Outer Limits, the latter-day western Stoney Burke, and still the only Esperanto-dialog feature film, the horror flick Incubus (starring William Shatner, doing his best with the manufactured language, a year or so before moving onto a series that would spawn at least one more popular Intentional language). The series was meant to be named Stryker, after Richard Egan's character John Stryker, who is so damned important to the world that his car has special not really licence plates, not vanity plates, that simply read "JS"...and why not, since Stryker is an amalgam of Batman (sans costume), Sherlock Holmes and James Bond, while also now a major industrialist who sees his responsibility as to provide as many jobs as possible...and that's the least improbable aspect of this childish creation. Embittered by the US government's unwillingness to see that the greatest threat to the US is not the large Leninist powers, but that all are equally threatened by the shadow organization led by the descendant of Genghis Khan (who is played by Telly Savalas, of course, in perhaps his first Yul Brynner sub role), Stryker has left government service...till the President pleads with Stryker to come back to find a literally mad scientist, Burgess Meredith, who holds the tech specs of All, every one, of the US's most top-secret military weapons in his mind...but these days more or less fantasizes that he is trumpeter Al Hirt. To tell much more is to needlessly spoil the joy of this ineptly-written, reasonably to very well-acted, beautifully shot (thanks mostly to Conrad Hall) telefilm, which you really should see (even as the running time has been padded a bit by inclusion of all the footage taken of airplanes taking off and landing)...as I failed to remember that I've put it in a 2011 entry in this series:

Television films have had a tendency to be bland, even when promising to revel in salacious material (hitting all the stops in notoriety from The War Game through Born Innocent to Mother May I Sleep with Danger? and Little Ladies of the Night), and shallow; only occasionally do we encounter the truly lunatic film-for-television, but some can stand proudly in this "alternative" (in the sense that Bill Pronzini applies this adjective to Harry Stephen Keeler's fiction, and others') field...and one such item is Fanfare for a Death Scene, co-written and directed by The Outer Limits creator Leslie Stevens, and one of the most joyously ridiculous crime/espionage dramas one can hope to encounter, straight out of the same well of creativity that led Stevens to also produce the only feature-length horror film in Esperanto, Incubus. Somehow, Stevens managed to get a script approved for the Kraft Suspense Theater [actually, dusted off for play in that series, presumably] which involves a disinterested Richard Egan seeking out a defecting scientist amidst a swirl that includes a crazed Burgess Meredith mistaking himself for Al Hirt, with the rest of the cast filled in by such stalwarts as Ed Asner, Tina Louise, Telly Savalas, Khigh Dhiegh (born Kenneth Dickerson, after The Manchurian Candidate  but before Hawaii Five-0) and Viveca Lindfors. The climax is hilarious [and very abrupt, as if the budget was utterly spent; Stephen Bowie notes in his first post on the film that the original cut includes footage of Savalas chortling and promising this won't be the end of his perfidy, to set him up as the Fu Manchu/Wo Fat of this series]]; the entirety of the episode/telefilm, as the [then] only commenter on IMDb notes correctly, is surreal. It's genuinely fascinating in the way that a Stevens production gone wrong, as with several Outer Limits episodes and Incubus, can be...and you probably won't be wishing you were watching something else while it plays...and I'm happy to report that I've just discovered that Netflix is streaming this alternative classic, so that gray-market discs don't have to be relied upon. I shall have to reacquaint myself. [...as I have since done, via Amazon streaming, where it's free.]
Posted by Todd Mason at 12/25/2012 04:40:00 PM

Email ThisBlogThis!Share to TwitterShare to FacebookShare to Pinterest
Labels: Christmas, Tuesday's Overlooked Film and/or Other A/V

Thanks for linking to the MEDICAL CENTER piece.

More on STRYKER, including the abrupt ending:

And, it was mostly directed by Walter Grauman, without credit:

Sounds utterly bizarre and well worth seeing - I suspect not possible in the UK. Have a good holiday Todd.

Thanks, Stephen. I actually link to your "Outer Limits of the OUTER LIMITS" piece in the text of the review.

Sergio...I suspect the gray market might be able to fix you up rather easily for STRYKER/FANFARE FOR A DEATH SCENE...if indeed Amazon.co.uk can't stream it...and no one else does...

Thanks for taking the time out for collecting these, Todd. Hope you had a great holiday.

Thank you, Jerry (and you Sergio) not only for contributing, but for your well-wishing (and Prashant and Patti for well-wishing via email).

Hope your holiday was greater than mine!

L saw the original version which contains many shortened versions of scenes from the movie version,. The scene where Stryker accepts the assignment from the President was re-shot for the original pilot. After the shootout (the abrupt ending in the feature film), the pilot has the Mongolian villain (Telly Savalas) enraged that Stryjer has killed his top lieutenant and prevented the capture of Bannerman(Burgess Meredith). the mastermind vows to kill Stryker. Back in his business office, Stryker discusses the case with the President and gets a new assignment: prevent an organization called the Pyramid from sabotaging American oil tankers in the Middle East. This oil tanker plot seems to be the setup for an un-filmed second episode.

Thanks for letting us know...sounds like Criterion maybe should get on this!