update from Richad Lupoff: FFB: WHAT IF? Volumes 1 & 2, edited by Richard Lupoff--anthologies of stories that should've won the Hugo Award... 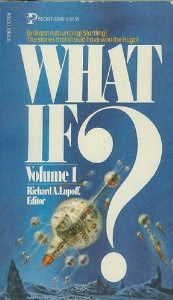 The Hugo Awards, of course, are (mostly) literary awards voted on by (shrinking fractions of the) membership of the WorldCons, the World SF Conventions held annually, most often but not always in the US. The first Science Fiction Achievement Awards, which early on were informally then formally renamed in honor of Hugo Gernsback, the founding editor and publisher of the first all-sf magazine Amazing Stories, beginning in 1926 (at least, the first such periodical that wasn't a "dime novel" series or mixed-intent "boy's paper" or the like), were awarded at the 1953 WorldCon, PhilCon II; the next were given in 1955 and in every year since, and soon were being awarded to no-bones-about-it fantasy stories such as Robert Bloch's "That Hell-Bound Train" (published 1958, awarded in 1959, the victor on one of the most crowded ballots in Hugo history, also featuring stories more fantasy than sf by Fritz Leiber and Manly Wade Wellman) (courtesy the Hugo Awards pages) :

So, given all the worthy shorter stories that languished (or even unworthy ones, as I suspect the entry above by the remarkably untalented Stanley Mullen to be), even by 1980, in relative obscurity, despite almost winning the most prominent award in fantastic fiction over the previous decades, Richard Lupoff's gathering stories that, he argued, should have won in their years was an utterly natural idea for an anthology, or even a short series, as Pocket Books put out the second volume a year after the first.  (Guest essayist Barry Malzberg, in his review for The Magazine of Fantasy and Science Fiction, could only note as well how natural an idea for an anthology this was and to self-remonstrate for not making an effort to pitch the idea to a publisher before Lupoff did.) And, of course, an attempt to "right" historic "wrongs" and help preserve the literary legacy of fantastic fiction has since become an annual tradition at the conventions as well, the "Retro Hugos"...not yet a gleam in the Con Committees' eyes or agendae in 1980.
courtesy the Contento Index to Science Fiction Anthologies and Collections:
What If? Volume 1 ed. Richard A. Lupoff (Pocket, Sep ’80, pb); subtitle: Stories That Should Have Won the Hugo

What If? Volume 2 ed. Richard A. Lupoff (Pocket, Feb ’81, pb)
There's not too much to quibble with in these slim volumes, aside from casting your own eyes back over the shortlists at the Hugo pages linked to above, and deciding which other nominees, as far as one is familiar with them, were robbed even more blatantly instead, if any were...there's not a story above that I don't agree is impressive or interesting at very least, though the Shirley Jackson story is only fantasy by fiat, being one of her most cheerful stories and utterly within the realm of "realistic" or contemporary-mimetic fiction...but, for some reason, Jackson's other, better-paying markets (women's magazines [which almost all still published fiction, including ambitious fiction, regularly], The Saturday Evening Post, The New Yorker) bounced it and Anthony Boucher and J. Francis McComas (the latter on his way out the door as co-editor) were more than happy to take it at F&SF, where it was neither the first nor certainly the last inclusion to be neither fantasy nor sf.  Kate Wilhelm, still productive, along with editor Lupoff (also still publishing interesting work) and the never terribly prolific Pauline Ashwell are the only contributors still with us, and all the contributors are perhaps less potent commercial "properties" now than they were in 1980 except for Philip Dick and Jackson and probably Wilhelm, whose crime-fiction career probably reached its peak in popularity so fat over the last decade or so...this true even given how Wilhelm's late husband Damon Knight's "To Serve Man" has passed into almost folkloric status (and is rarely credited properly), and his brilliant "Four-in-One" collected in Volume 1 was the demonstration subject in his reasonably popular Creating Short Fiction instructional volume. That Theodore Sturgeon's fine story managed to employ a helical metaphor before The Double Helix does as little to preserve his legacy as does for his Cyril Kornbluth's fine "The Marching Morons" being dumbed down without credit for the film Idiocracy, itself a commercial failure fading from the public memory; work as fine as "Two Dooms" will probably live on, with a coterie audience. Ah, well, FFB readers, you should seek out the work of everyone listed above, except Mullen (who was on this ballot, I'm sure, because he was a personally popular fan as well as improbably successful at selling terrible stories to fiction magazines) and perhaps (or perhaps not) Anton Lee Baker, whose work I don't know at all. And these books are excellent starting points, if you need such, and if you've missed these stories, you can do much worse and only a little better.

Patti Abbott has the links to other reviews this week here; Barry Malzberg's essay on New American Review (later American Review) is here; Richard Lupoff's contribution to FFB from a year or so back is here.

Actually my contract with Timescape called for four volumes of What If? and the series was going so well that my editor (David Hartwell) asked me to extend the project to five volumes. However, the bean counters disagreed and the project was cancelled while Volume 3 was literally in press. My recollection is this: I received two letters from Pocket Books in the same day's mail. One was from the promotion department and contained an advance copy of the PW review, along with a congratulatory note on the glowing notice. The other was from David Hartwell, saying approximately:

"I can sell more copies of a run-of-the-mill first novel by a totally unknown author than a collection of short stories by Theodore Sturgeon. Consequently, the What If series is dead."

But I think that was just an advance temblor. Shortly after that the entire Timescape project was killed.

Recently a set of galleys of Volume 3 turned up, as did a cover proof, an the book is now in production at Surinam Turtle Press, an imprint of Ramble House. www.ramblehouse.com  I'll attach a copy of the cover as it would have looked in 1982, Not sure what it will look like in 2013.

Both What If and WRITER are tentatively scheduled for publication this September.

Great idea for an anthology (or two) - loved the post Todd - all great writers either way. Off to read the Jackson and re-read the Sturgeon as soon as I get home and manage to find the books wherever they are stashed in my packing boxes!

Yes, there's a whole lot of good work from the people collected in the Lupoff volumes, with the weak exception of Pauline Ashwell, who published only sparingly and sometimes (spottily, early on) with the beard-pseud of Paul Ash. Thanks for the benisons, and good luck with the box-diving!