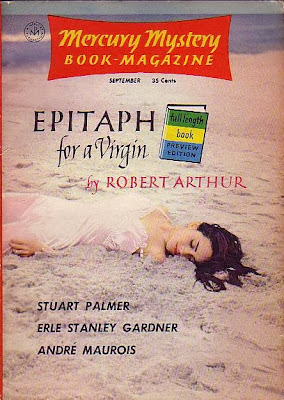 The editorial work of Robert Arthur has been extraordinarily influential on my reading life, as the ghost editor of most of the Alfred Hitchcock Presents: anthologies and the "Hitchcock" anthologies aimed at younger readers published in the latter 1950s through his death in 1969 (he didn't quite make it to 60, though he left a fair amount of work behind him, having first published in sf magazines with an entry in Wonder Stories in 1931 and perhaps having published professionally even earlier). These were among the most eclectic and engaging anthologies I read in my youth, augmented by the occasional anthology Arthur would edit under his own name (he also ghosted one for Red Skelton, of all people).

His collections Ghosts and More Ghosts and Mysteries and More Mysteries were also early favorites (particularly the first), and while drawn from such magazines as Argosy and Bluebook (and EQMM and F&SF) were marketed as kids' books, which was fine by me at the time...but it remains a pity they have been only such collections of his work published. And while I've been enjoying his various radio and television and film scripting over the years since reading those two collections in my first decade, this novella is the first new-to-me fiction I've read by him for quite some time. Several years after the publication in Mercury Mystery, a slightly longer version was published as half of an Ace Double Novel as Somebody's Walking Over My Grave (1961), and this stands as the only novel aimed at adults he would publish that I'm aware of. (I never did much care for the Three Investigators novels for young readers, which he either wrote or eventually had ghosted from his outlines; yet more were written completely by others after his death.)

Since it's a Robert Arthur fiction, it's slickly written, playful and witty for the most part...he was clearly having some fun writing a post-Jonathan Latimer/Mickey Spillane sort of relatively explicit, if not so much as to get too many blue noses out of joint, hardboiled story, with cocksure private detective Max London as heedless of consequences of tangling with crooked police chiefs and well-connected mafiosi as anyone this side of the Destroyer, the Lone Wolf, and other later vigilante antiheroes. Nonetheless, at least in first form, it's sadly relatively minor work, dependent on even more coincidence than the story itself mocks in other similar stories (London eventually sees through some reported coincidences in the testimony of others that strain credulity, but the eventual truth he uncovers doesn't strike me as any more plausible), and the sexual politics of the story, not altogether atypically for its field or era, seem also to straddle the line between knowing parody and blithe exploitation of the prevalent stereotypes...not only do the manful characters occasionally express their confusion in the face of women's inscrutability, but one technician, noting that the cigaret butt of a woman suspect lacks any trace of lipstick, wonders what kind of woman is she, anyway? (Meanwhile, there are certainly implications that one of the two apparent virgins in the novella might be a lesbian, but a round of manful kisses soon puts that woman straight.)

I have to wonder if the later version of the novel doesn't improve on this draft (Kevin Burton Smith says no), but I would certainly send the curious reader onto a good episode of The Mysterious Traveler or Murder By Experts, or the short fiction, or one of his entries in the Thriller or Alfred Hitchcock tv series, before recommending this novel...which is nonetheless a smooth and relatively diverting read. You certainly aren't going to find too many other hardboiled novels where the motivating factors include patents on color television broadcasting technology. 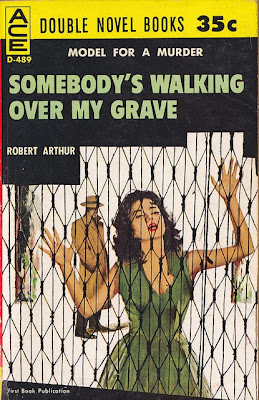 the balance of this issue's contents (at this point, I think Mercury Mystery was constrained from potentially "stealing" too many short stories from EQMM, so concentrated on shorter true-crime essays and you-solve-it puzzle games for its shorter content):

"Mystery Puzzle: Miami Murder" by J. A. Kripper
(which is a very poor choice of minute mystery to immediately follow the Arthur novella, as it depends on a gimmick that was much the topic of opening-pages discussion in "Epitaph")

"Once Aboard the Lugger" by Stuart Palmer (a rather interesting premise, particularly in an historical article...a married couple of tramp sailors who book adventure tours supposedly in search of various sorts of loot, in a set of circumstances that wouldn't've been out of place in a B. Traven story...sadly, told in a most windy and redundant fashion, by a retired newspaper guy as well as a popular crime-fiction writer who really should've known better...)

This issue can be read at Unz.org.

The fine cover of the Mercury Mystery issue recycled from an earlier  cover for Ellery Queen's Mystery Magazine, and some Bettie Page covers for EQMM, among other matters...
Posted by Todd Mason at 12/13/2013 11:23:00 AM

I have the Red Skelton anthology.

I only know his work for the Three Investigators series. I think some of those stories might have been recycled from the Jerry Todd/Poppy Ott series as they share several similar titles. I've never compared them side by side though I've always wanted to do so.

Never knew he wrote crime fiction for adults, let alone a novel. Thanks for this enlightening post, Todd. Will have to find a copy of the Ace Double.

I enjoy Arthur's writing and wish some publisher would produce a decent retrospective of his career.

I'm with Jerry. I hope STARK HOUSE or some other small press brings out a volume (or two) of Robert Arthur's works.

Bill--I put a link into the post for the ISFDb index of A RED SKEL(E)TON IN YOUR CLOSET, which doesn't yet mention Arthur's participation...a good antho, if more chestnut-laden than even the typical Arthur editorial job. Does it credit Arthur anywhere? Even in the vague manner of the HITCHCOCK books?

John--I know you must've looked at some of Arthur's anthologies over the years, even if you didn't realize he was the editor of the books at hand. Yup, since I started with his adult work (even when packaged for kids), the rather cookie-cutter feel of T3I didn't really work for me.

Jerry and George--it's really past time. Hell, Hard Case has done worse than EPITAPH...and I've loved the cover for the MERCURY MYSTERY issue (reused by EQMM) for years, but the cover for the Ace edition is about as handsome.

Thanks for the link to the Ace Double, Todd. I'm not familiar with Robert Arthur's work, ghost-written or otherwise. I also haven't ready any short stories or short fiction by Gardner. I need to look at authors' works beyond some of the characters they are famous for, like Perry Mason in case of ESG and Tarzan in case of Burroughs. I'm assuming that "The Knockout Bullet" is not about the defence attorney.

No, indeed, Prashant...the Gardner piece is an essay, in fact, about an historical crime and investigation. And Gardner had other series characters he enjoyed writing about, though Mason was easily his most famous (as well as slightly autobiographical) by the end of his life. Mercury in its career as a no-bones-about-it magazine, enjoyed running some true crime writing in every issue.

FWIW, the Unz link is to the magazine, not to the text of the Ace version of the novel, much less both novels in the double-volume...

I've always enjoyed his radio programs, short stories and have the Ace novel although unread as yet.

As you no doubt know, Todd, there is a nice writeup and picture of Arthur on his daughter Elizabeth's website: http://www.elizabetharthur.org/bio/rarthur.html

She is a fine writer of mainstream fiction.

I have read her site...it's interesting how no one much wants to discuss why Arthur died so young. Certainly understandable on his daughter's site, slightly puzzling in the uniformity. (She, and her husband, have written eclectically, in fields beyond the contemporary-mimetic, I gather...he's had the unenviable task of novelizing the scripts from the Spielberg-produced AMAZING STORIES series. I believe it's William Goldman who is credited with the aphorism, You can't wash garbage.)

I've never read Elizabeth Arthur's husband's work nor her mother's. The mother looks more interesting. She and Robert met in Whit Burnett's writing class in NYC and she placed several stories in Story.

As for Elizabeth Arthur, her two memoirs are well written, especially the first ISLAND SOJOURN (Harper 1980). It's about a lengthy stay with her first husband roughing it on an isolated island. I've yet to read her novels.

As for wondering about the cause of her father's death at 59, you seem to be hinting at something being kept secret. Is that the case? Yes, 59 is relatively young but some folks die of natural causes a lot earlier than that.

Not hinting so much as simply wondering. 59 is certainly old enough to die of a heart attack easily, or cancer or any number of other things, particularly in 1969, or for that matter of complications of the Writer's Disease, alcoholism. It's simply that no one anywhere seems to cite a cause of death.

For my part, I've yet to read anything by anyone in the Arthur extended family other than his work, though I'd heard of Bauer before (if I'd heard of Elizabeth, it was very peripherally). (It's also notable the absolutely amateurish packaging job Charter Books did on the AMAZING STORIES prosification volumes.)