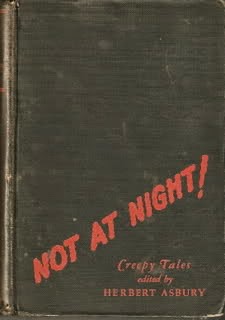 From ISFDB:
Despite featuring two stories by Laurie Powers's favorite pulp writer, this anthology from Weird Tales magazine's early years is almost exclusively of historical interest (even given the paperback reprint of half a decade ago by Wildside Press)...and not inconsiderable historical interest, as the first compilation of stories from the magazine to be published in the US (and so clunkily sourced, apparently pirated, that it attributes its contents on the acknowledgements page to the Christine Campbell Thomson's British Not at Night anthologies, mischaracterized as Weird Tales as if that was the title of her books rather than of the US magazine that all these anthologies draw from). However, these should be added to the quick and dirty survey of Weird Tales anthologies that has been a running feature of this blog. The first two editors of WT, founder Edwin Baird and the first of the two legendary editors of the first inpulpation of the magazine, the eccentric Farnsworth Wright, are given a reasonable representation of their efforts in the first four years of the run, albeit with many of the best and best-known writers of Wright's era not represented (and some of them not yet contributing much, despite the presence of work from Seabury Quinn, Lovecraft, and Lovecraft buddies August Derleth and F.B. Long). I've just picked up a slightly battered copy of Not at Night US, for a rather inflation-ravaged $2 that it might've cost new (back when $2 felt more like $30 might today) (along with copies of issues 23 and 24 of the JDM Bibliophile, the venerable John D. MacDonald fanzine also at $2 each). I'm still reading Martha Foley's memoir, which becomes tangentially relevant in that Foley would read Weird Tales for stories for her volumes of Best American Short Stories, and that MacDonald's first short story was in Foley's magazine Story in 1946...but I'm glad to make mention of this one in this context.

I had several of the original UK "Not at Night" books and read several of the stories, not all, by the lesser writers. Many of them are very poorly written, but no one was drawn to Weird Tales for its writers' literary prowess. It was always for the story and the shocks and thrills. I can only marvel at he grotesque imaginations of some of these guys...and in one case gal. Some of them outdid Poe in that regard.

SO typical of Asbury who was an opportunistic reporter for the yellow journalism rags of the early 20th century. Not at all surprised he would "borrow" these stories and misattribute them.

[N]o one was drawn to Weird Tales for its writers' literary prowess."

That was more often true during Wright's tenure than Dororthy McIlwraith's later on (hence, in large part, Foley's consulting WT when it was publishing such writers as Blackwood, Wellman, Bloch, Bradbury, C. L. Moore, Sturgeon, St. Clair, Leiber and others who knew how to write a sentence)...and even Wright wasn't Inherently against good prose, he just didn't seem to favor it necessarily. But Wright did favor eccentric prose at least as much as the sensational, seeming to prefer the Clark Ashton Smiths to the Seabury Quinns, even though Quinn was the commercial star of the magazine.

"The Parasitic Hand" just caught my eye, as I'm working on some research related to evil hands in fiction and film. Anyone recall the storyline of this one?

Fascinating stuff Todd - I had no idea that WT anthologies were being assembled this early on.

Thanks, Sergio...People seemed to tumble to WEIRD TALES as the kind of unique magazine it advertised itself as being, from early on. (Certainly, GHOST STORIES wasn't much of a competitor.)

Kelly, "The Parasitic Hand" is written in awkward gosh-wow, but does get right to its point, in being a surgeon's account of removing a suddenly maturing extra hand, growing from a patient's ribcage, which the doctor diagnoses as being the remnant of an absorbed twin. The hand had been baby-sized for years, then suddenly underwent a growth spurt; upon removal, its ghost? ghostly twin? began scratching and grabbing among the patient's internal organs until succeeding in squeezing the heart to death. So, half baked and definitely malevolent.

And, again, I found myself commenting under Alice's login.