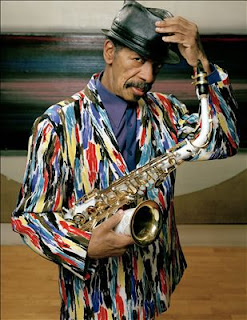 
1959: The Year That Changed Jazz (y'know, unlike every year, though it was an important one)


Ornette Coleman: The Shape of Jazz to Come


Ornette Coleman and the London Symphony Orchestra:  Skies of America

A nice array of Ornette and Ornette-related material. The MJQ version of Lonely Woman has always been a favorite of mine -- Chris Connor also did a vocal version, I believe. Given all of the hubbub when he first burst on to the scene about how weird his music was, it's interesting how relatively un-radical it sounds now. Like Bird and other revolutionaries, he's been assimilated to the point that his originality may no longer be obvious to a later generation.

No successful revolution is ever "complete" and any advances do indeed become the defaults...shall have to look for that Connor. Thanks! (And, yes, Miles Davis and other clowns did their best to derail Coleman...and, happily, Coleman persevered, with no little support from John Lewis, even as Dave Brubeck would publicly admire Cecil Taylor...while the Truly Hip were busy preparing for fusion that was a dumbing down of the free jazz they denigrated. Another sure sign of Success, at least artistically.)