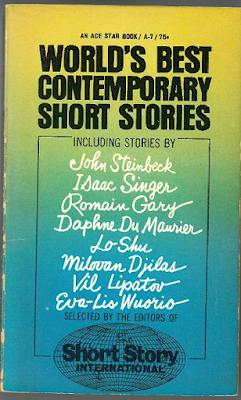 Having written about Donald Wollheim's tenure at Ace Books, I was gratified to learn while researching some of the details of his work there that one of the books he was almost certainly responsible for as publisher's editor (given his consistent interest in international fiction, and that he was editing most of the contemporary fiction Ace published) was this, an anthology from the magazine Short Story International, which flourished for several years in the mid 1960s as a monthly digest-sized magazine drawing on English-language stories and stories in translation, in the hopes of both entertainment and international understanding. The magazine folded but was revived in the latter 1970s in a more expensive package, and ran in that version for a couple of decades; I'd first heard about it as a source of stories for Judith Merril's Year's Best S-F: Tenth Annual Edition, a 1965 book I read in early 1978, and later that year was able to find my first issue of the revived title, which I would read whenever I came across copies thereafter (it had a somewhat limited newsstand presence in the latter '70s, even as it had been a fully newsstand-accessible magazine in the '60s).  The title and package somewhat resemble the sf annual Wollheim was editing with assistant Terry Carr beginning in 1965 and running till their departure from Ace after the 1971 volume, World's Best Science Fiction, and generally it is reasonably representative presentation of what SSI was offering in the 1960s...reprints from other magazines, some far more obscure than others and some simply not necessarily going to draw the eye of the typical SSI reader--even a story in the Saturday Evening Post could easily be lost in the shuffle of that prolific magazine's weekly issues and several short stories per issue at the time, much less the Australian men's magazine Man or the Ladies Home Journal...back when that title, like most big broad-spectrum "slick" magazines, still featured fiction. And then there were the little magazines, and magazines and collections and anthologies published by foreign governments as part of cultural exchange programs. 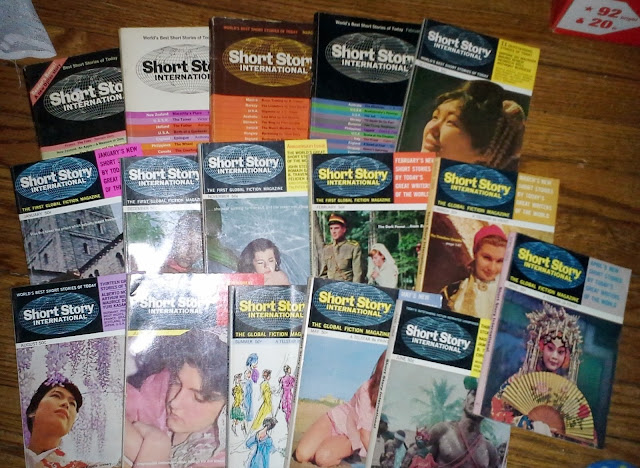 It's just arrived, so I haven't had time to sit down with it and dig in, though another Frank Roberts story was a memorable entry in the Merril annual from all those years ago (this, like the earlier one, is apparently sf), and I'm definitely interested in reading the only long story in the volume, Daphne Du Maurier's novella "The Blue Lenses"...as well as being curious about the Djilas short story, "War," which was published (in Italian) while he was a political prisoner in Tito-era Yugoslavia, and apparently did nothing to help his practical situation at that time. Romain Gary and, of course, John Steinbeck (in a piece that appeared in, of all places, True magazine--back when that magazine was willing to pay for a little marquee value, I guess) are among the familiar names...I've read the Shymansky previously in part because I was the contributor to the FictionMags Index who posted that particular issue of SSI, some years back...one of the first issues of the 1960s version I'd read.

Below is an index I've put together from the volume's headnotes and the TOC, as the only contents index I've found online, that from a WorldCat participant, has several typos and far less information. Still need to scan the covers of the volume...haven't seen any images online yet. Issue of SSI where the stories in question appeared cited where known, from the FictionMags Index...where, currently, the Du Maurier novella is listed as a "novel," no doubt from a TOC tag referring to it as a "complete novel" in that issue of LHJ. 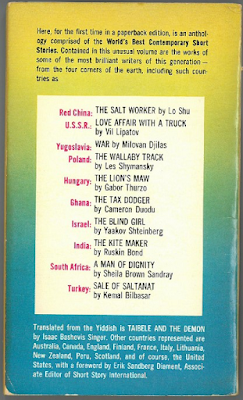 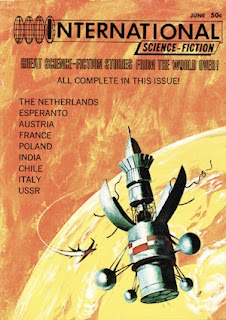 It's also interesting as an example of the ex-Futurians' tendency to encourage exploration of world literature...Wollheim and Merril pushing the magazine through their books while also publishing international writers in many other contexts, Frederik Pohl probably using the example of SSI to argue for trying out his slightly later magazine International Science-Fiction... 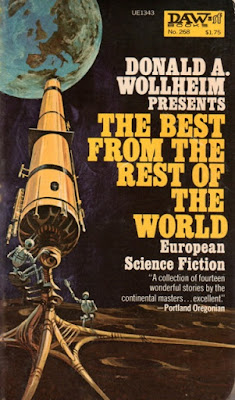 For more of today's books, please see Patti Abbott's blog. This week's list is dedicated to the memory of Randy Johnson.

Good grief! What an amazing posting! I am impressed with your energy and thoroughness. I think you could sell air conditioners in Iceland. You've hooked me. Now I have to go shopping!

Thanks, RT...it's a task that arguably needed doing, given how little good info on this book is on line...and there aren't Too many copies I've seen for sale (one attempted purchase was cancelled by the vendor), but my rather good copy wasn't expensive.

I actually have a copy of this, though it's quite yellow. The copyright appearing in mine is 1965. Incidentally, the Steinbeck piece is from his collection of WWII correspondence, Once There Was a War, which appeared in 1963, the same year it appeared in True. Likely Steinbeck and Viking were only happy to publish excerpts for the purpose of promoting the new book, especially since he was not the A-level fiction seller he used to be.

I don't read short stories except rarely now and again usually by mistake. I know, I know, from your point of view, Todd, I'm missing out on some damn fine writing. But I have to be honest about it. However, having said that, I do admire your enterprise and your obvious love for the genre.

The short stories I can claim to have read (though they are not my favorites of their writing) are ones by Rex Stout, Agatha Christie and Dorothy L. Sayers. But I do remember reading the short stories of O'Henry and Guy de Maupassant while in high school - and hold on to your hats - liking them.

In fact I still can remember a couple of them. So why, in the long run, did I turn into a short story grump?

Thanks, Frank! I'll have to check my copy...though it looks as if the copyright was registered in January of '66, and the accounts of Ace Books history seem to tag the book as a '66 release. I don't think I bothered to look at that page of the book. And that does make sense, the TRUE excerpt and the timing...pretty rare, if not unique, in my memory of SSI for them to run an article, particularly in this context...but neither SSI nor Ace were averse to marquee names, either. And the mid-'60s editor of TRUE was aiming to raise the tone of the magazine, with some success.

Yvette--you're a big-cavass enthusiast! But I've never understood not liking fiction at all lengths.

Todd, I like reading short stories and that is an impressive lineup of some very fine storytellers. Despite his age Ruskin Bond continues to write and is popular among young readers in India, where he has lived all his life. He should have got more international recognition than he has. I rate him on par with R.K. Narayan and Mulk Raj Anand.

I look forward to the Bond story, and others to come.

SSI was a good magazine in both runs, and it's a pity it's gone.