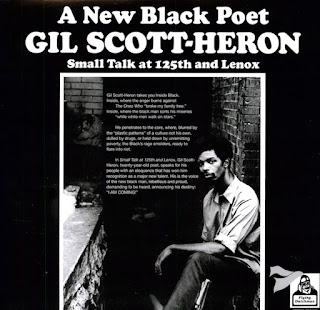 from art-song recitative through gospel singing speech and on through other spoken rhythms to music explorations and traditions, a slice through some of the strands that were drawn upon when rap began to take its own shape in the latest 1960s/earliest 1970s in the work of Gil Scott-Heron and the Last Poets...and then beyond.


The Memphis Jug Band: "On the Road Again"

The Last Poets: Made in Amerikkka (excerpt) (NSFW language at points)

Gil Scott-Heron: "Comment #1 (Who Will Survive in America?)"  (NSFW language at points)

The Go! Team: "Keys to the City" and more

Gil Scott-Heron was incredibly gifted; I've been a fan since The Revolution Will Not be Televised. He died too soon. The Last Poets: Strong medicine but something that needs to be heard. The Memphis Jug Band: The Lovin' Spoonful did a cleaned-up version of On the Road Again that has some of the same gusto. The MJB is an endless source of pleasure for me. Moody's Mood is in a class by itself. Someone once said it was on every jukebox in the civilized word. O mores! O tempora! It's funny that you mentioned Blossom Dearie; I was thinking about posting about her on my own blog. Great selections!

Well, Jim, you know I'm not going to argue. Blossom Dearie as the answering voice in "Moody's" needed to be mentioned, and definitely could use a write-up on your blog. Probably could've used some Nikki Giovanni here, too, among so many others, but this is just a slice, not remotely comprehensive...people will probably wonder why the art-song and tape manipulation/electronic items are here at all...but, then, too many seem puzzled when I suggest that rap wasn't actually invented in 1978ish. Thanks.

Although every rapper alive owes Gil Scott Heron a debt I think he's better and more intelligent than every single human who ever rapped. He's political, gives a damn, and actually respects other people. In addition, lyrical content aside, his poetry/music is a lot more pleasing to the ears than any hip-hop song.

Well, Charlie, I'd say you've been listening to the wrong rap...though that's pretty; easy, given the lightweights and thugs and bores that are usually pushed on us. Those who follow GSH on the links list are pretty solid by me, but it's not quite their best work so much as pretty good stuff that I didn't think was overexposed...