2 Fritz Leiber horror novels in online PDF reproductions of their "natural" habitats (CONJURE WIFE in UNKNOWN WORLDS, 1943; YOU'RE ALL ALONE in FANTASTIC ADVENTURES, 1950) 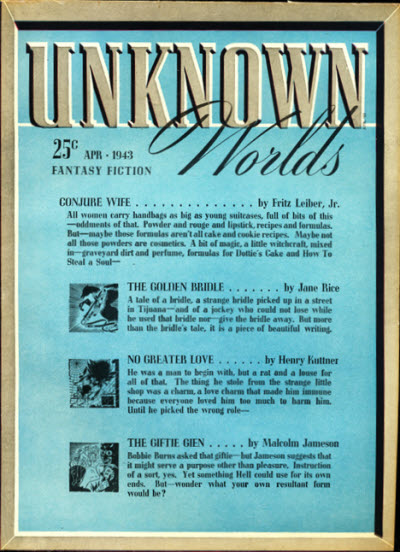 The links below take you to the highlighted titles as they have been scanned online from their original magazine appearances. 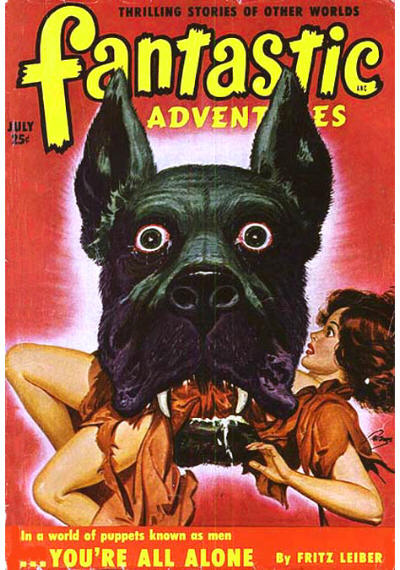 
Three "bonus" issue covers (texts not obviously online that I could find...go find the hardcopies/books!):

The third Leiber horror novel, in its original shorter form, later expanded for book publication as Our Lady of Darkness (and Edward Ferman might be the most underrated editor in the field's history, if his one-time assistant, later Fantastic and Heavy Metal editor Ted White, isn't): 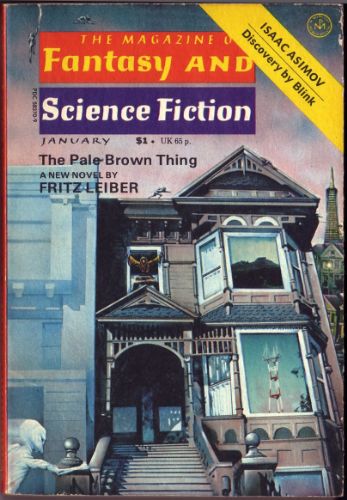 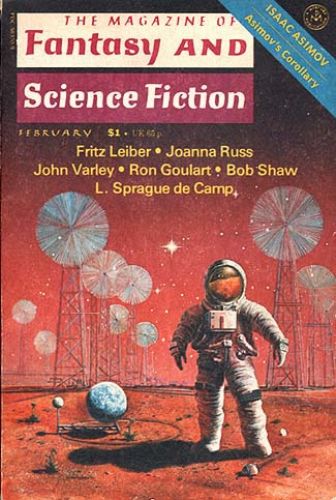 And another Jones cover...the Virgil Finlay interior illustrations were Much better--
the Bloch story is an excellent zombie metafiction(!), adapted for television with moderate success (and a good cast save the star) in the early 1970s; the Sturgeon and Simak stories were good, and the McGivern, Sheldon and Phillips stories not too shabby, either...from the intermittently impressive Fantastic Adventures issues in the several years running up to the launch of Fantastic in 1952): 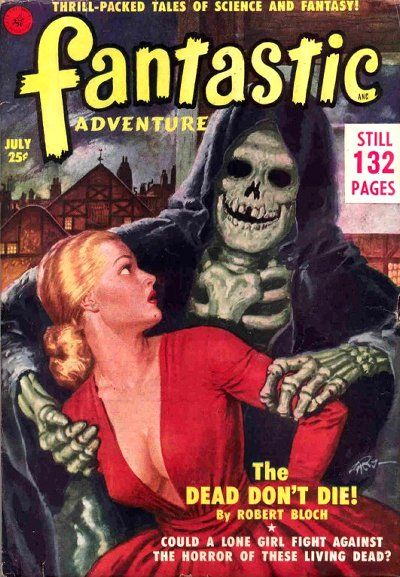 As far as I am concerned, the natural habitat for Leiber's work is in my hot little hands.

Great stuff. Thank you very much.

And, you know, Jerry, I still need to read Leiber's DESTINY TIMES THREE...probably his most important work I haven't read. Though it's past time that someone collected Leiber's columns for FANTASTIC, LOCUS, FANTASY REVIEW and others...perhaps with his fanzine NEW PURPOSES...

And there's almost certainly some good Bloch, particularly for the various Chicago-based magazines, that hasn't been reprinted...

You're quite welcome, Ed. Thanks, gents.

Chicago Tribune has released its archives from behind the paywall, so all of Leiber's reviews of science fiction and popular science books (lots on scuba diving) from about 1948 to 1956 (when he was editing "Science Digest" in Chicago) are available to read online.

All wonderful of course but ... what is the rights situation with those PDFs then? I know, it's the lawyer in me, so apologies in advance ...

Fair use comes into play, apparently, with these issues that, at very least, are out of copyright in the Ziff-Davis case...and almost certainly in the Street and Smith case. I was wondering that about the Utz posts, myself, and similar. As non-profit postings, these apparently aren't, frankly, convenient enough to be a real threat to royalties on any text still under copyright that was published in these issues.

I'm intrigued by your 'original shorter form' comment on the Leiber 'Pale Brown Thing'. I had thought that it was the usual case of Ed Ferman (makes deep obeisance) getting out the editorial scissors for the serial form (e.g. Budry's Michaelmas 80,000 words to 45,000.words). Do you have any more information on this?

Leiber taped interview cited elsewhere on the blog, Paul...I believe it was the one with Randall Garrett, but will have to confirm.

Interview linked to on this page...if you get a chance to review it before I do:
https://socialistjazz.blogspot.com/2015/10/tuesdays-overlooked-films-andor-other_20.html

Also, I think Budrys would've cut MICHAELMAS for the purpose, but could well be wrong. HARD LANDING wasn't trimmed, I believe.

Thanks for the link, Todd, I'll have a look.