The Night We Caught the Hallowe'en Show: guest post by Jeff Segal 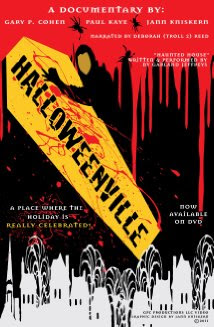 I watched the documentary Halloweenville late Friday night, the 30th, taking notes on how enthusiastically Lambertville, NJ celebrates the holiday and which streets to visit. That exposure, plus what I found on the internet, assured us of a more entertaining adventure. Local Lambertville filmmaker/musicians Paul Kaye & Gary P. Cohen helmed the doc and they recruited actress Deborah Reed to narrate. She is known, with good reason, among cult film fans for her role in the legendary Troll 2 as the bespectacled queen of the goblins, vicious vegan monsters who convert hapless humans into greenery so they can be eaten.

Saturday, October 31, 2015
﻿
Though Saturday's temps never rose beyond the low sixties, the cheery sun was out all day and there wasn't much wind when sundown brought temperatures down to the upper forties and early fifties. I had on my clunky large ankle-cradling shoes, thick jeans, a multi-pocketed zipper up vest that had belonged to my father UNDER my oversized Hawaiian shirt and a large multipocketed black jacket (the heaviest of my lighter jackets, which in conjunction with the rest of them, probably adds up to a winter coat) so I was quite comfortable lumbering around two quaint towns Hallowe'en night: New Hope, PA, where we eventually ate and shopped, is separated from NJ's Lambertville by a sheet-metal automobile and pedestrian bridge that clanks as we walk over it...and we did lots of footwork. My cousin Joe and my buddy Jeff were dressed in traditional more serious winter outerwear.  While killing time in New Hope, waiting for sundown, we ate at the Logan Inn--good, tasty food but too pricy for my comfort. We didn't encounter any scary phenomena, save for the bill, but ghosts would have certainly given us more bang for our buck if we had! Once it grew dusky, we packed our purchases of New Hope fudge and gourmet popcorn away, clanged back over the bridge, and re-entered the transformed Lambertville. I had switched the Christmas-decoration-festooned, guinea pig-sized rubber spider that I had been carrying (Nastassja Kinski once, gingerly, had patted it, its sole brush with celebrity) with the dog-sized rubber cockroach that I had decked out with a Santa cap, a pet sized Santa coat and Christmas mittens, plus a spiked collar and leash. The Christmas roach (as my cousin dubbed it), often evokes cringing revulsion in many onlookers once they realize what it is and I cradled it in one arm like Paris Hilton does her barking rat-dogs, jiggling it around for maximum jointed-leg-twitching effect. It did its magic Hallowe'en night, provoking much conversation and gasps.


Evidently, there are side streets of decorated houses and neat businesses, most of which we didn't have time to side-track down. But we did tour the most popular street in Lambertville, which the police close to automobile traffic for several hours Hallowe'en evening. Many residential and businesses owners decorate along that drag, with second and third stories featuring illuminated or moving figures against windows, things dangling out of the window frames, webs stretching from top floors down to their postage-stamp-sized front yards. I recognized some of the props as pop-up Hallowe'en store merchandise from the current season or previous years, but the owners often utilized them in ways that maximized their efficiency or modified them. There were plenty of created-from-scratch figures and scenarios, some I recognized from the Halloweenville documentary. I think I saw the one house where the owner made use of hooded, caped performers in expressionless golden masks--she confessed in the film that she had discovered that they disturbed visitors more than the more obvious monsters that she had once employed; the house front and yard looked familiar but I didn't see any masked figures doing odd rituals...they still might have been lurking about.  Amid the concerts of ghostly noises some owners played, a ghoulish rock band pounded out classic dark rock tunes such as a track from the Pink Floyd album Dark Side of the Moon. To accommodate the hundreds of trick 'r treaters (including parents, older siblings and many costumed pets, some in glow-in-the-dark outfits to prevent them from getting stepped on), many owners stocked BARREL LOADS of goodies. A significant portion of the revelers were costumed. We only saw a portion of them but some folks were pushing a huge enclosed transparent illuminated crib with their multiple monkey-garbed children, another family had their children in a huge carrier dressed like a waste management truck. A child too young to be watching or reading Watchmen was dressed as Rorschach. The most impressive spectacle of the evening had at least two strong adults operating an Imperial Walker the size of of a large bulky camel, complete with classic "Imperial March" theme playing in a loop. The four-legged costume didn't walk swiftly up the street but the crowds did part out of respect for it.

[Unrelated to the documentary, except from the same year's festivities:]

This is the type of well-populated small-town Halloween celebration nostalgically envisioned by the movie Trick 'R Treat. I'm sure that the revelry could be juxtaposed with adventures down creepier parts of town where there are more shadows than people and among more rural patches in Lambertville; that was the geographical contrast mapped out by the Trick 'R Treat film and could be used as a template for Lambertville as well.
Posted by Todd Mason at 11/09/2015 12:20:00 PM

Thanks Todd and Jeff! I had no idea Lambertville was that hardcore into Halloween.

I've always been a bit surprised Haddonfield, NJ hasn't made a big deal out of the holiday, but perhaps celebrating a serial killer, even a fictional one, known for victimizing residents of a identically named town doesn't go over well with the town supervisory board. :)

To say nothing of adjoining Collingswood being two letters away (as my spell-checker loves to inform me) from Barnabas Collins's not quite resting pace, in DARK SHADOWS...