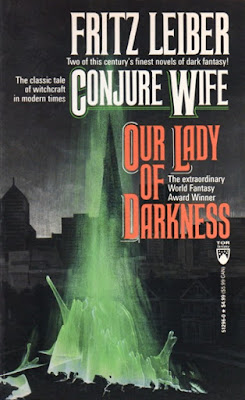 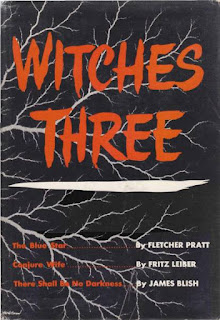 While I've hardly been ignoring Fritz Leiber or even his first published novel (apparently his third long fiction to be completed, after the long-lost [in the author's files] novella "The Dealings of Daniel Kesserich" [published posthumously in 1986] and the novella "Adept's Gambit," which would not see publication till Leiber's first collection, Night's Black Agents, 1947), I have not yet formally entered Conjure Wife into the FFB mix (one or two others have, as I recall), and it's high time.  One of the most influential and brilliant of horror novels I've read, and unlike most horror novels (particularly since the influence of Stephen King and Anne Rice and their sustained commercial success have helped make bloated, maundering kitchen-sink approaches once again the default mode in the novels in the field), the Leiber is lean and tightly constructed, remarkably so for a still just-beginning professional writer (albeit one who was no kid, and perhaps crucially had already been a student of both classic drama, and a professional actor, and the writing of essays and sermons).  Even one who'd already published perhaps the single most game-changing short story in horror of the 1940s, "Smoke Ghost." There are relatively few novels that have their first film adaptation released years before their first publication in boards or even paperback, and Conjure Wife is one of them; the relatively minor (and unfaithful) adaptation Weird Woman was released in 1944, a year after the publication of the novel in a late issue of the fantasy-fiction magazine Unknown Worlds; remarkably, the novel wouldn't be reprinted in book form until 1952, and first in an omnibus edited by Fletcher Pratt for Twayne Publishers, Witches Three, which was created in part to provide a home for Pratt's own short novel The Blue Star. The next year, paperback house Lion Books and Twayne would publish the first standalone editions of Conjure Wife, though not the last by any means...and it would be serialized in a 1970s prose horror-fiction magazine published by Marvel Comics, The Haunt of Horror, edited by then comics-script and later screenplay-writer/television producer Gerry Conway.  Given that Leiber's next novel, Gather, Darkness! (serialized in Unknown Worlds's companion magazine Astounding Science Fiction in 1943) was published in book 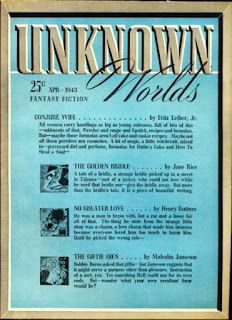 form in 1950, one has to wonder why the masterful horror novel had to wait a bit longer, and longer yet for its own boards (but, then, there was a bit of a gold rush, on this "science fiction" thing Doubleday was so het up about, among other larger and medium-sized houses at the turn of the '50s, which was less true of convention-challenging horror fiction...perhaps its notable that even Shirley Jackson's The Haunting of Hill House wasn't published by her first consistent publisher, Farrar, Strauss, but by Viking...and even Farrar, Strauss had taken a tremulous baby step toward this wild Buck Rogers stuff with Theodore Sturgeon's More than Human [1953]...not, on balance, the worst choice they could've made, but the Ballantines had to hold their hands to steady them in a co-publication deal). And, a little more digging around in the ISFDB suggests the probable reason for the book-publication delay...Arkham House apparently had struck a deal to publish the novel, but managed not to do so as the years ground onward...not a unique situation. 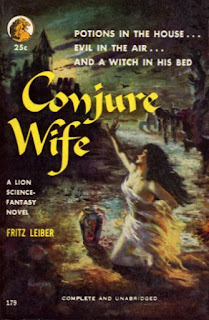 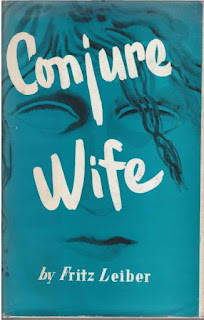 It's the story of surprisingly successful, brash, full of himself youngish anthropology professor Norman Saylor, and his wife Tansy, and what happens when Norman discovers that Tansy has been practicing the nearly universal feminine art of actual, supernatural and effective witchcraft, for their protection as well as a manner of helping Norman along in his career.  Saylor's condescension and paternalist concern knows little boundary as he half-convinces Tansy that her fear of the consequences if she gives up her practice, as he demands and cajoles her to do, is simply neurotic, encouraged by her false assumption of the widespread nature of the practice among women. And then things start to go wrong...very wrong. Norman is stripped of his smug misapprehension bit by bit as the other women, of longer standing in the college town where the Saylors have only relatively recently arrived, increasingly clearly to him conspire to take advantage of Tansy's new defenselessness, and as a result his own. Things grown even worse, presented in such a way that provides one of the great frissons in horror fiction, as Norman desperately, clumsily tries to learn as much as possible to take up the magical slack to protect and save them both. The first time I read the novel, I was reading it too quickly...rather easy to do, as Leiber's prose is as lucid and elegant as it is suspenseful...and flew right past the most shocking development...only to find myself halfway down the next page suddenly registering--What Just Happened? So, don't speedread this one. The rest of the novel from there is not quite denouement to the climax that provides, but is the logical (and paralogical) development from that. 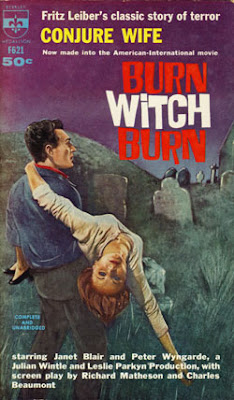 Leiber is fully in control of his materials here, having great fun with turning the sexist presumption of his premise on its head and using it, not least in the nature of Norman's reaction to Tansy's admissions, to instead satirize sexism and patriarchal pomposity. Norman's mansplaining is shown pretty quickly to be the cheerful self-importance of the unencumbered (rather than privileged, I'd suggest) reasonably well-off educated white male in U.S. society of the time, and the liberal-arts college subculture, rather than, as Norman was quite sure, the full measure of reality well-understood. The resentment so many women felt, particularly at that time and in those places, in having to live through their husbands (and at the mercy of what their husbands might achieve) is keenly demonstrated, even as filtered through the metaphor of witchcraft, itself historically in part the expression of "underground" women's work and passage of too often necessary but officially forbidden knowledge from one generation of women and some sympathetic men to the next, at very least in many European Christian contexts. His protagonist, based on a satirical self-portrait, is at first a blinkered Norman sailor on a sea of ignorance, who quickly learns better (while Leiber's father was an important though ambiguous figure in his life, he was largely raised by women in his extended family, as his parents were touring with various dramatic troupes including their own, where Fritz, Jr. would eventually begin his acting career). His wife Jonquil (note the oddness of the name Tansy) was instrumental in getting him to finally get serious about his writing career; among other things, she was the one who first wrote to H. P. Lovecraft on her husband's behalf, leading him to receive some epistolary advice and mentorship in the last months of Lovecraft's life.  And, as I like to note, among the younger members of the "Lovecraft Circle"

of corresponding friends, Leiber and longer-term protege Robert Bloch were the most notable immediate heirs to the innovations Lovecraft helped introduce in the literature, and both managed to do more and better than their mentor with what he helped them find.

There have been, along with the many editions of the novel (including two omnibi featuring Leiber's third horror novel, in its final form Our Lady of Darkness), two more film adaptations, in 1962 the good and faithful if slightly stiff Night of the Eagle (released in the U.S. with the A. Merritt title variation Burn, Witch, Burn)--the script adapted by Charles Beaumont, Richard Matheson and George Baxt, which along with the faithfulness might've helped the modest production be as it is easily the best film of the three--and the loosely adapted 1980 horror comedy Witches' Brew, with Teri Garr, Richard Benjamin and Lana Turner (her last film). 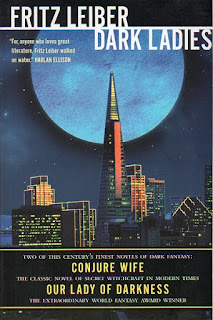 I was also going to consider one of the too obscure literary children of this novel, A Personal Demon by David Bischoff, Rich Brown and Linda Richardson (indeed, three writers on one fixed-up novel; NAL Signet 1985, revised from a series of stories published in the latter 1970s in the magazine Fantastic), but I'll hold off on that for today, as I'm already late for Patti Abbott's round-up, listed at her blog as usually. 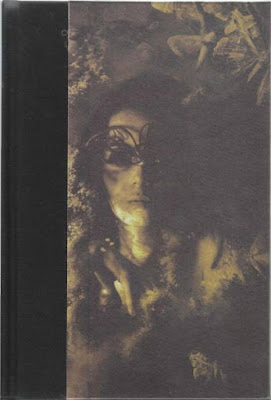 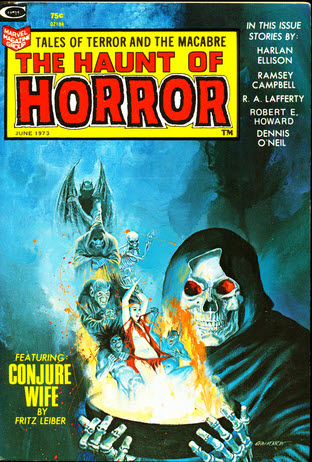 Great post Todd and the Leiber novels fully deserves - a genuine favourite, one of the few I take the trouble to re-read pretty regularly and which i am always recommending to people. I just bought the Blu-ray edition of NIGHT OF THE EAGLE, which is well worth getting by the way for it looks great and has an (old) audio commentary with Matheson and a (new) interview with Peter Wyngarde.

Sounds good, the new video release...we, alas, don't have Leiber, Matheson, Beaumont or Baxt any longer to hear from, but we have the legacy of their work. I need to reread OUR LADY OF DARKNESS, too...are there any other Leiber books you return to?

His stories of Fafhrd and the Gray Mouser (indeed, beginning with "Adept's Gambit") are certainly not oppositional to this novel, Richard! And in those, Fafhrd is a correspondent to Leiber, the Mouser to Harry Fischer, Leiber's old friend who helped devise the characters and wrote a bit of "Adept's" and a considerable amount of one other story in the series...being too lazy to check at the moment, I think it was "The Lords of Quarmall"--and, unlazing, I'm correct. The best of the F&GM stories are on par with CONJURE WIFE and the best of his other horror work (F&GM are often borderline horror in their sword and sorcery context), though the weaker ones are, well, lesser...since Leiber notably used the duo to help ease himself around writer's block at several points in his career...and amusingly traded characters with Joanna Russ for one story each, in which Fafhrd appeared in one of her Alyx stories, Alyx in one of his F&GM tales...

Sold! (if only for "bloated, maundering kitchen-sink approaches.") Your wordsmithery is addictive, Todd.

Thanks. Though Leiber being a better writer than Rice and King...well, it's such a given that it seems strange to have to stress it. As are so many writers. Particularly than Rice...King has shown some genuine talent on occasions in which he wrote another draft.

Love this book, always have, always will - well done Todd.