Two magazines which offered their first issues in the summer of 1963; both were on newsstands in July. Both would offer a mix of fantasy (very much including horror), some sf and (as has often been the case with fantasy-fiction magazines over the decades) some stories that were more fantastic-adjacent than departures from consensus reality.

Both were produced on modest budgets, but Gamma featured a full-color cover and relatively good paper, if a saddle-stapled binding; the first issue of Magazine of Horror (the lack of article in the title has always seemed awkward to me) was on a lower grade of paper, but the first issue, at least, was perfect-bound (glued, with a spine), though not long after, the MOH would also go to staple-binding.

And, in their mix of new and reprinted content, the two magazines come off rather more similarly than one might expect, particularly as the Magazine of Horror was both economically but also by intent delving largely into public domain reprints from the pulps, most importantly Weird Tales, and earlier fiction from other sources, featuring reprints from Mark Twain, Ambrose Bierce, Robert Chambers and H.G. Wells along with the WT crew, while Gamma (with some if limited visual art within) was devoted to showcasing the "Little Bradburys" of the Los Angeles area, many of whom were screenwriters and not a few in Rod Serling's stable of contributors to The Twilight Zone...hence the prominence, aside from commercial good sense, in highlighting Bradbury's (reprinted) contributions, the Serling interview, and a piece of juvenilia by Tennessee Williams first published in Weird Tales (and also conveniently in the public domain); the other reprints in Gamma include decade-old stories from other fantasy/sf magazines and one of the most prominent fanzines of the time, a poem from a regional magazine and one of a number of vignettes commissioned for an advertising series that ran in Scientific American. Chatty headnotes to the stories and other expressions of strong editorial presence are hard to miss in both issues. 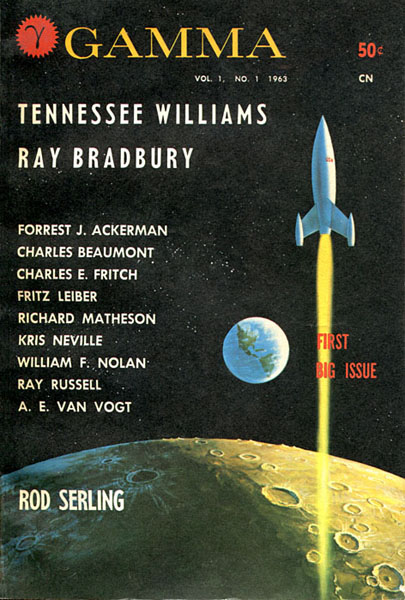 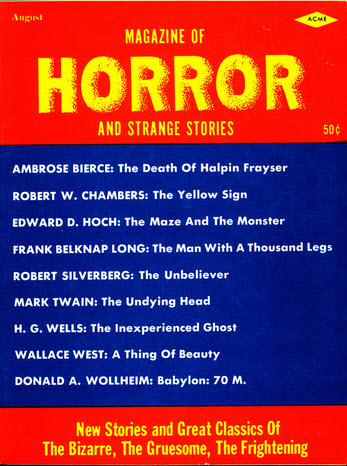 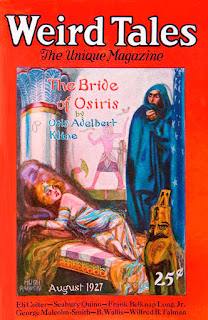 Both magazines lead off with stories by the kind of writers who would predominate throughout their runs; unfortunately neither is a first-rate story. Frank Belknap Long's "The Man with a Thousand Legs" is a remarkably tone-deaf attempt to emulate Lovecraftian overstatement (which Lovecraft himself wasn't so good at), clunking along through one clumsy turn of phrase after another (and exactly one good one, when it's suggested a shell game con-man will look upon a potential source of income as his oyster); Charles Beaumont, probably the most widely-respected of the group of writers dismissively tagged "little Bradburys" by some, but who notably could dig a bit deeper in his best work than Bradbury usually was able to, provides something very much like a Bradbury version of a Manly Wade Wellman story, set among rural folk coping with a very old and eyeless man, replete with pet raven and guitar, who serves as a harbinger (agent?) of death when he comes down the hill and plays and sings his "Mourning Song" in front of the houses of the soon-dead...for however many days till the death actually occurs. By 1963, Beaumont was probably already dependent on his friends to finish when not completely ghost his work for him, as the early-onset Alzheimer's which would kill him a few years later was already making its presence known. Long's story is among his earliest work, though he did make some judicious rewrites at Lowndes's request (presumably excising some though not all the racist language in the original)...but not nearly enough of them.

Wallace West is next up in the MOH, with "A Thing of Beauty," a Weird Tales reject that presumably sat in a drawer for three decades, and perhaps deservedly, though it's certainly a better story than the Long; a hunchbacked functionary at a medical school becomes obsessed with the corpse of a young woman, a suicide-by-gas, one of those he's charged with preserving for purposes of med student dissection. His rhapsodies over her nude form allow West to have him recite no little Romantic poetry, the caretaker's other obsession. WT editor Farnsworth Wright supposedly rejected the story as too distasteful, though its frankness is one of its few strengths. In the Gamma issue, Fritz Leiber's "Crimes Against Passion" is a playlet, one of his surprisingly few explorations of that form (given his theatrical background and love of the work of Shakespeare and John Webster, among others). It's also an excuse to rummage about mostly in Shakespeare's plays and to a lesser extent those of Aeschylus, while making easy jokes at the expense of modern psychiatry...this piece is one of the weaker Leiber fictions I've read, and feels like the kind of thing that instead would've gone to one of the more literate fanzines normally. Leiber is a better artist than West, but neither is swinging for the fences in these, even given the indulgence in hat-tipping to their literary favorites. The West isn' t horror fiction or at least is non-fantasticated; the Leiber is so much a stage jape or sketch that it barely registers as fantasy. 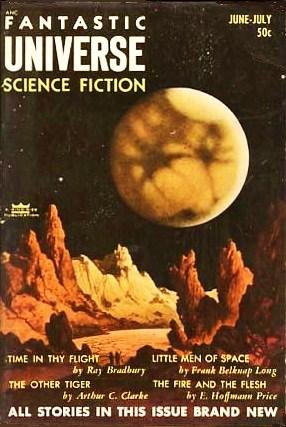 The next (reprinted) stories in the issues are Robert W. Chambers's "The Yellow Sign" (from his collection of linked stories The King in Yellow, so much with us in the popular culture a few years back when the first season of the HBO series True Crime tied the murders portrayed in its narrative to a psychopath's devotion to the book)...this is the best-written story so far in the issue, by some distance, far more deft and fresh in the telling than the West and vastly better and less clumsily dated than the Long, for all that it hails from the 1890s; I suspect it suffers a little from being excerpted from the book, but it can stand, if probably less effectively, on its own as the story of a sort of haunting; Ray Bradbury's "Time in Thy Flight' had been his contribution  to the first issue of Fantastic Universe a decade before, cover dated June-July 1953 (edited by Samuel Merwin, Jr., who had been one of Bradbury's editors at Thrilling Wonder Stories and who would, as would Charles Fritch after him, eventually edit Mike Shayne Mystery Magazine), and it's as ham-handed and precious as Bradbury at his worst ever was, with 11yo children, on a time-travel field trip to 1928 holidays from a highly-regulated and antiseptic future, choosing to stay where fun is to be had...because 1928 orphanages were piles of fun. 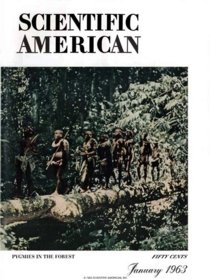 "The Vengeance of Nitocris" is also an early Weird Tales story, the first publication of a teenaged Thomas Williams not yet signing himself "Tennessee", and a narrative which is determined to not simply foreshadow but clumsily reiterate what was about to happen as an Egyptian pharaoh takes revenge on priests responsible for the death of  her brother, the previous pharaoh. The 1920s were a good time for working Ancient Egyptian settings into the ground, particularly in WT. While in the MOH "The Maze and the Monster" is a bit of throwing-back romp for Edward Hoch, harkening to "The Lady or the Tiger" and "The Most Dangerous Game" (and even the similarly retro "The Two Kings and the Two Labyrinths" by Borges, which Hoch might've been able to read) as well as grim adventure fiction of an even older vintage. Hoch had been one of Lowndes's "discoveries" at the Columbia crime fiction and other magazines he'd edited from the early '40s to the folding of the chain in 1960, and perhaps his most literarily significant new writer along with Carol Emshwiller; Hoch, as I didn't know previously, also contributed to the (ostensibly) nonfiction magazine Lowndes was already editing for Health Knowledge, Exploring the Unknown.  The reprinted A. E. van Vogt vignette, "Itself!", is slight, easy to take in, and indicative of how well he can put across paralogical moods and rather singleminded predation. Also, as isn't uncommon in his work, it's a bit goofy.

The new Silverberg and Wollheim stories in the MOH are good examples of what these writers can do, and I'm looking forward to the Ray Russell original and Kris Neville reprint in Gamma particularly, while holding out less hope for the Ackerman collaboration, never published with recognition of that collaborative authorship, and supposedly rewritten from a 1953 appearance in the literate fanzine Inside. The Wells story and Twain tall tale are good work, from my memory of them, decades ago...this review will be updated over the next day or so...

The two established fantasy and sf magazines in the US had solid issues out in theoretical competition with these startups... 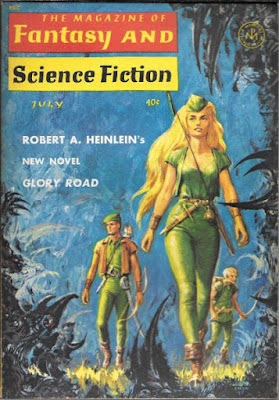 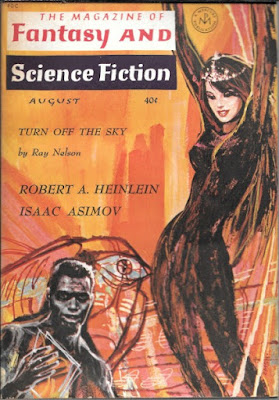 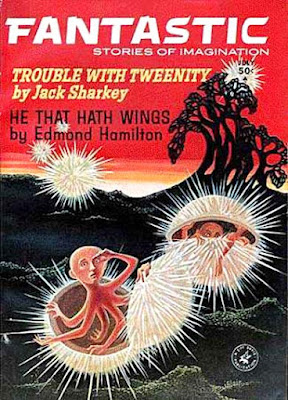 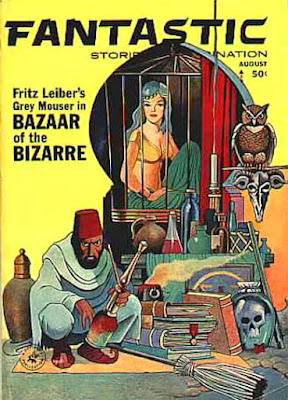 While the only other fully professional fantasy/sf magazine in English, the British Science Fantasy, also had a pretty impressive issue: 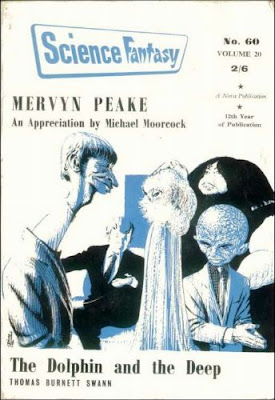 For more of today's books (and perhaps more magazines or short fiction), please see Patti Abbott's blog. I will be hosting next week, as the Abbotts hit the Bouchercon.

I was very impressed with the short-lived GAMMA and the longer but still short-lived MOH. Shoestring publications both (and GAMMA seemed to have poor distribution in New England), but both entertaining. MOH and the other Lowndes magazines to follow allowed this teenager to sample then hard-to-find stories and authors and to begin to have an understanding of the genre.

While straitened by depending on public domain reprints, Lowndes's magazines certainly were less haphazard in choosing older material than most of the Ultimate Publications reprint magazines usually were...and with Very rare exceptions, Ultimate's magazines were drawing on only the Ziff-Davis back issues and the older AMAZING (and AMAZING STORIES QUARTERLY and ANNUAL) backfiles when it was published by Gernsback and by Teck Publishing. And only STRANGE FANTASY, one of the best of the Ultimate reprint magazines, but a short-lived one, focused much on horror.

It's perhaps typical that the most iconic story published by GAMMA wold also be non-fantasticated, if disturbing: "The Snail Watcher" by Patricia Highsmith. But they had their share, as well...and Charles Fritch ended up editing the last five years or so of MIKE SHAYNE MYSTERY MAGAZINE a decade and a half after GAMMA folded. And added some horror there, and a book review column by John Ball, and published no few of these writers with names like Crider and Reasoner and Lansdale and Moore and Shiner...whatever happened to those guys?

Thanks for the mention of the Magazine of Horror. I need to dig out my stack and refresh my memory.

You're quite welcome, Jim...thank you. I bet you'd like GAMMA if you saw it, then or now.

re that SCIENCE FANTASY -- I'd forgotten that Terry Pratchett's first nationally/internationally published story appeared in the same issue as what must have been Mervyn Peake's last or essentially last published story. Some sort of weird changing of the guard there. (And a major Swann story to boot. Them was the days.)

Yes...and even given the unevenness of the established magazines' contents cited above (the Heinlein novel starts well and bogs down very thoroughly very quickly; Jack Sharkey was rather overrated in the early '60s--but the Leiber F&SF and FANTASTIC stories, the Nelson and a few others are brilliant, as well), the elder three do rather outshine the two little undercapitalized upstarts. But all five have their charm. (The only issue I had of SCIENCE FANTASY for many years was the Next issue, a good one, but one rather less, indeed, indicative of the shifts in the fantasy-fiction landscape.)