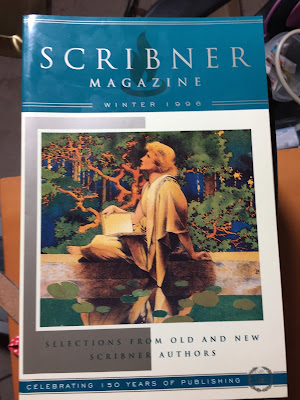 Scribner Magazine was a loss-leader that apparently produced only two expensively turned-out issues in 1996, a Spring-Summer issue as promised (on the back cover) to follow the Winter issue I have before me. On heavy slick paper, 80 pages plus covers (though only the outside of the cover stock features more than black and white), it is mostly an excuse to run excerpts from the Winter '96 releases from Scribner's book imprint, along with a reprint of an Edith Wharton story from the December, 1911 issue of Scribner's Magazine, a new interview with Alice Walker, and a mixture of bits and pieces, older and new, from the current staff and back issues of the magazine when it was still a magazine. (Since this was published, a ScribnerMagazine.com website was announced in 2014 and apparently has been discontinued, unless the site is simply down for some reason; last update I can find evidence of was in 2017.) Meant to be given away, this tall digest will set you back from $5-20 on at least one clangorous online site...the Spring/Summer issue seems harder to find, and runs about $5 more. 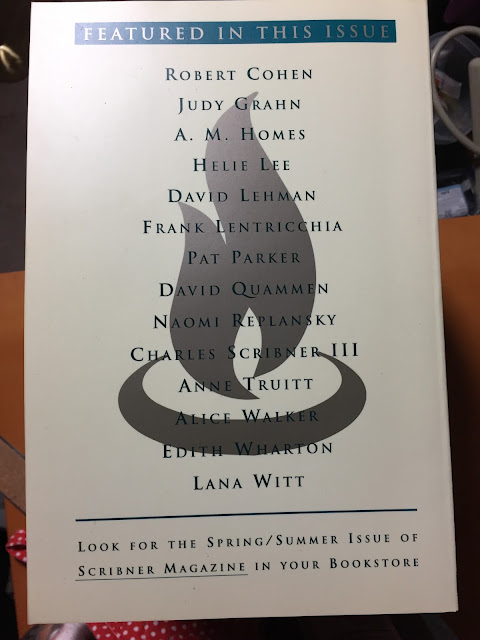 As teasers go, this was a rather elaborate one, and with no little good reading (and not a little of that criminous, between the Holmes and Lentricchia excerpts). Perhaps unsurprising that such an expensive-seeming freebie barely saw another issue. 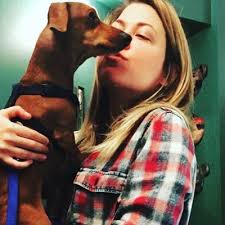 Amy Silverberg is a stand-up comedian and writer of fiction and criticism, based in L.A. and at last report about to pick up her PhD as well as teaching writing at USC.  Her story from Southern Review for Spring 2017,  "Suburbia!", has been picked up by this year's editor Roxane Gay for Best American Short Stories 2018. It's one of the few cited at her website that you can't read online, though you can read an SR interview with her.

She has a lean, sometimes analytical approach in her fiction that might remind you of, say, Patricia Abbott, and a similar love of the deadpan:

“I’ve never been very good at choosing men,” my mother had said recently, over the bland red-sauced pasta she made once a week, having decided I was old enough to have that kind of conversation. We kept the television on at a low roar in the background, accompanying us during our nightly routines.
“I’m not good at it, either,” I told her, because, though I had little evidence so far, I instinctively knew this was true.
“Oh, honey,” she said, “I’m sorry. That’s probably all my fault,” and I nodded, because it probably was.
As befits a comedian and Second City grad, her wit is usually obviously at play, and she does love the shortest forms as well as the mid-length...she's at work at a novel. Her jokes as a comedian are also rather well-written...even if she seems a bit too eager to bail on them at times in her delivery...
For more of today's books, or books proper, please see Patti Abbott's blog...as well as her books...
Posted by Todd Mason at 5/04/2018 06:53:00 AM

Anther periodical I've never seen before this. I suspect no contemporary publisher would be interested in the SCRIBNER MAGAZINE today.

They certainly seem to have bailed on their own website, as well...

For me worth the price for the Wolfe pieces alone. Great find!

I must admit I'm sorry I missed the second and presumably last issue...but that would've been just as I was getting out of bookstore work, for the most part...