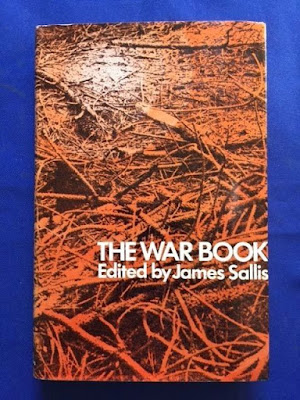 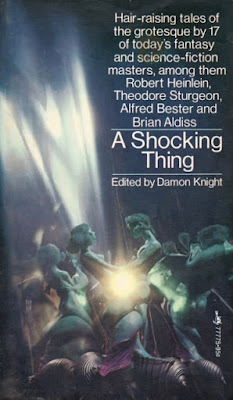 Two eclectic anthologies, the first from a then-young writer (some decades before becoming much better known for his crime fiction rather than his fantastic fiction) who had had (if I'm not mistaken) his first professional editorial experience at New Worlds, working with Michael Moorcock as that magazine went through a period of extreme ferment and turmoil (artistically and financially), and one from a veteran writer and editor, whose anthologies tended to be eclectic and challenging...and if the US had a single publication that seemed to be holding a position akin to what New Worlds in the Moorcock years was up to, it was Damon Knight's anthology series of new fiction Orbit.  Both primarily reprint anthologies with a single new story each--James Sallis contributes one of his own, Knight has a new one by his wife, Kate Wilhelm (as well as a new translation by the editor of a French story)...mixed in with classics, both the chestnut and "lost" kind.  And these are two volumes largely populated by old favorites of mine, the writers when not also the specific stories.

For example, the Sallis leads off, after the editor's heartfelt introduction (apologizing in part for a few stories he couldn't get for the book...I suspect there might hang a tale or two there), with Algis Budrys's sly fable "The Price", a particular favorite of Budrys, I think, since he recorded it for his one spoken word album, and I can see why. Along with such famous stories as Fritz Leiber's "The Foxholes of Mars", Fredric Brown's "The Weapon"  and William Tenn's "The Liberation of Earth", rather savage satire in the background or foreground, there are the less-well-remembered, if unfairly--and both cover stories for their issues of The Magazine of Fantasy and Science Fiction in the early '60s--Mack Reynolds's challenging "Pacifist" and S. S. Johnson's disturbing "The House by the Crab Apple Tree"--the latter reprinted from that F&SF issue only in the subsequent Best from F&SF volume, and this book...and Johnson's only publication in the fantastic-fiction media. It doesn't flinch, and is far more "dangerous" in its approach than anything in Harlan Ellison's famous anthologies or nearly anything published by New Worlds. I've written about both stories before, and probably will again. George Macbeth's "Crab Apple Crisis" is a fine bit of absurdism that I've encountered a few times before, but not in too many books still in print.

While the Knight features such well-loved, disturbing classics as Dahl's "Man from the South", Collier's "The Touch of Nutmeg Makes It", Bester's "Fondly Fahrenheit"  (a technically tricky story, hailed by many though not me as Bester's best short work, though it is impressive), McKenna's "Casey Agonistes", White's "Lukundoo", Highsmith's "The Snail Watcher", Aldiss's "Poor Little Warrior!" and perhaps most tellingly Sturgeon's "Bianca's Hands", which took several years to be published, and Sturgeon eventually placed it with the UK Argosy magazine, winning a 1948 story contest where Graham Greene's submission came in second. And while Ambrose Bierce and Robert Heinlein are far from obscure, perhaps their stories, while not forgotten, also aren't the first ones by either which come to most readers' minds, despite being among their more impressive work; likewise the 1943 translation of the Andreyev. Also notable is the original short version of Ted Thomas's "The Clone", which he would, in collaboration with Wilhelm, expand into the brilliant short novel of the same title. Other stories in the book indicated Knight's good eye for the overlooked story...the Thompson, the West and the Cogswell aren't too widely available elsewhere...though one of the other places to find the Thompson is Eric Protter's A Harvest of Horrors, which shares no fewer than three stories with the Knight.

Two impressive anthologies, and a pity both are so long out of print. For mor of today's books, please welcome back Patti Abbott to her listmaking and linking duties at her blog. 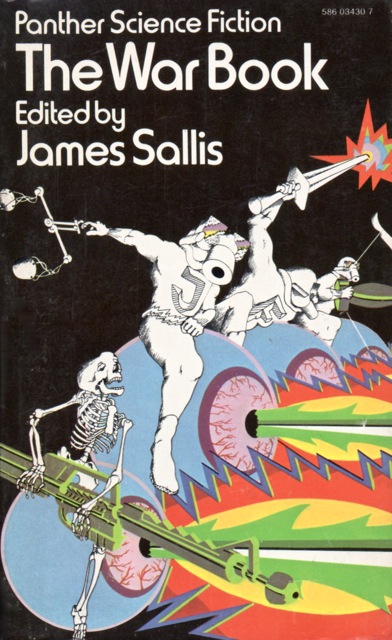 I read A SHOCKING THING long long ago. Damon Knight is an underrated editor.

I have not seen THE WAR BOOK but I'll search for it.

Thanks again for subbing for Patti the past few weeks! You're a stand-up guy!

Thanks, George...but I might have too much stage fright to try stand-up...

The hardcover original edition from Rupert Hart-Davis barely takes up more space than the Panther paperback...it does have a rather sedate jacket, as oppose to the very-much-of-its-era cover painting on the softcover.

I think that Knight was always trying to challenge his readership in various ways as an editor...which can disappoint some. I like his selections often better than consensus, myself.

And you, George, and the other FFB regulars, are very good and supportive people, too.