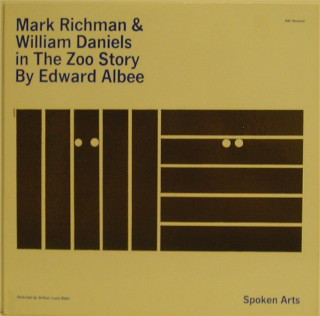 I've noted before on the blog that storytelling albums, such as a Smothers Brothers item I was given as a very young child (Aesop's Fables, the Smothers Brothers Way) and a very few other comedy albums my parents bought (SmoBro, Firesign Theater) helped bend the twig, along with such inputs as an audio dramatization of Dracula I borrowed on cassette from my elementary school library (and my very young brother managed to record over) and a wider range of audio materials I found at the public library from about age 9 onward, have left me a lifelong fan of the audio drama and the well-performed reading.

So, this week, revisiting some of the items of my past in this regard, which have become kind of remotely accessible when sought after at all...and certainly not on display for loan from public libraries or new purchase as they once were.


The Spoken Arts recording of The Zoo Story was probably the last of these I caught up with, in this week's set, and it was almost certainly not the first encounter I had with William Daniels in those days of the 1970s, but this was before I first saw the film of 1776, or of course his turn in St. Elsewhere or other, later television work...though I suspect I'd already seen him as the officious villain of the likes of The Rockford Files episodes. His name didn't mean much to me, if anything, though, any more than Mark Richman's did, though his voice seemed instantly familiar. Albee I'd heard of, mostly for Who's Afraid, but it was much more fun dealing with this bit of unprovoked parody, where (as you probably know) a somewhat fussy publishing executive is bothered while sitting, eating his lunch on a park bench, by a random stranger with a rather less settled life, and an outlook to match. Richman's bluff, somewhat reflective but arrogant swagger seemed even better-fitted to his role than Daniels's growing vexation...the role didn't allow him his later patented rage against whatever small irritants were bedeviling him. This was all but the Original Cast recording (apparently, the first US production had featured George Maharis in the Richman role, for about a week, before Richman took over), and it was an excellent introduction. 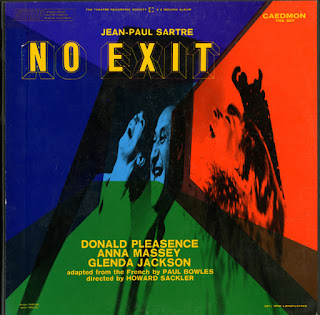 The Caedmon recording of No Exit, on the other hand, was among the first of the adult plays in the LP set format I listened to, given the horror-related theme of the work in question...and the production and performances struck me as excellent, as well as the play compelling (I don't think I was introduced to the concept of lesbianism by the play, but it wasn't too long after I learned the word, I'm sure...might've been as old as ten when I first heard this one). I was mildly aware of Donald Pleasance before the production, in much the way I was mildly aware of Sartre (I had read descriptions of his play, this Monty Python thing had a few jokes about him), but I was very impressed by this set...the recording below is slightly scratched up, but listenable:
No Exit 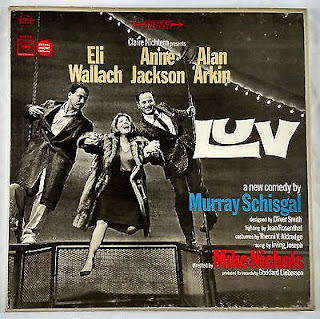 Now, by the time I tried this recording of Luv, Murray Schisgal's hit black comedy about suicidal and scheming NYC intellectuals in the then-present day (mid '60s), I was already a veteran of a number of plays on vinyl, and this one looked promising, even if doomed triangles (see above) were not a novel concept in my listening; I was already an Alan Arkin fan, from such films as Wait Until Dark, and was broadly aware of Jackson and Wallach...though the broad performances at the beginning of the play as recorded were a bit more offputting than I had hoped (I still haven't seen the little-loved film version, though as a stone Elaine May fan, I'll have to eventually...Nichols directed this version, and May takes the woman's role in the film, though as far as I know neither was involved with thought of the other in either version).  Another YouTube transcription of a scratchy but listenable copy (I have Never loved surface noise and worse damage on vinyl).
Luv, side 1 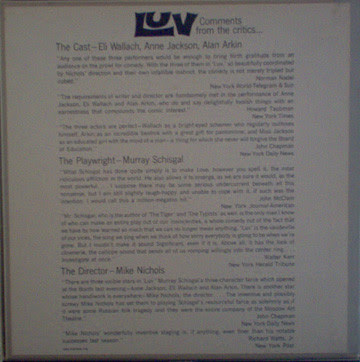 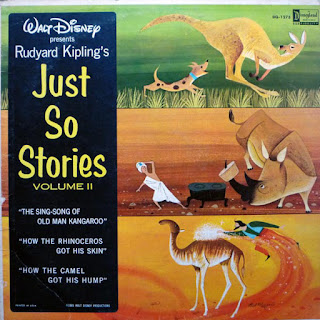 And while such labels as Spoken Arts, Caedmon, Argo and to a lesser extent more generalized labels such as CBS and RCA (or the little jazz label Prestige) would do spoken word recordings of often high caliber, one item that was actually purchased for my younger brother when he was only a year or so past recording over library tapes caught my ear, from the slightly improbable source of Disneyland Records...but Sterling Holloway's recording of Rudyard Kipling's fables was work that could and can stand alongside the fine work in folklore and youth-accessible literature the other spoken-word labels were offering...and the music, usually not missed in the other labels' recordings, was often not too shabby in at least such recordings as this. I don't think my parents ever got around to finding Vol. I for Eric, and I'm not sure I sought it out, but I did enjoy hearing this one with him.
"How the Rhinoceros Got His Skin"


For more purely literary contributions this week (except usually from Gerard Saylor, if he's contributing), please see Patti Abbott's blog.
Posted by Todd Mason at 8/31/2018 07:59:00 AM

Fascinating post! As I grow older, I've turned to more and more Audio Books. Currently, my wife and I are listening to ALEXANDER HAMILTON By Rod Chernow (29 discs--35 hours!) before we see HAMILTON, the hit play in October.

My parents had a several-record set of Kipling's The Jungle Book, apparently the sound from an early film The Jungle Book Sabu. I disliked the dark, sullen photography, but liked to listen to the story.

Thanks, George. Perhaps oddly, I barely listen to audiobooks as they are currently marketed at all, though on rare occasion. BBC readings and dramatizations the most often, other things online at times. Hamilton was a busy fellow.

Rick, I know what you mean about the somber cinematography of the 1940a THE JUNGLE BOOK film, which like subsequent films of that title ignored the other stories in the books in favor of the Mowgli stories alone...though it was a follow-up project to their great THE THIEF OF BAGHDAD remake, and it was on the final ballot for the Retro-Hugo this year...losing, as did CAT PEOPLE and I MARRIED A WITCH among more minor films with a stronger sf bent to the Disney production of BAMBI...thus circular relevance to my post this week, I guess, along with a rueful nod at the marketing power of Disney vs. what's left of the studios for the other 1942 films under consideration. It was the complete soundtrack for the film?

I don't remember now, just that it was spoken, and the Mowgli stories. I think it was 4 records each in a sleeve, bound.