Robert Bloch is, I would argue, the most important writer actually to have been a Weird Tales "discovery" though there is no denying that a sizable number of readers, as Fred Blosser noted indirectly today in comments, will suggest that his slightly older peer Robert E. Howard deserves that plaudit...Bloch's literary mentor and their mutual friend, H. P. Lovecraft, and most of  HPL's peers in largely making their names in the pages of WT such as Seabury Quinn, had all published some notable body of work before coming to "the Unique Magazine", and even such slightly younger peers as Ray Bradbury, who would begin contributing much of his best early work to WT a half-decade after Bloch, were spreading their contributions out to other markets to a greater degree than Bloch, who would be a stalwart contributor to, and soon a major star in, the Weird Tales firmament and remain so throughout the run of the "original" WT, until folding in 1954 (editor Martha Foley kept listing it as a consulted market for her annual volumes of Best American Short Stories into the 1960s, perhaps hoping that rights owner Leo Margulies would revive the magazine, as he kept hoping to do and finally did, briefly, in 1973). And Bloch's first major branching out was to contribute to a magazine hoping to be a more adventurous and less grim variation on WT, Strange Stories, one of a slew of new fantasy magazines founded by other publishers in the wake of Weird Tales in 1939, along with Unknown: Fantasy Fiction, Fantastic Adventures, and Famous Fantastic Mysteries, all of which Bloch would contribute notable work to in the years to come. Hence this, the most robust of the revivals of Weird Tales, offering the 300th issue (the numbering had been continued from the 1923-54 magazine through three previous short-term revivals) as a celebration of Bloch and his work. 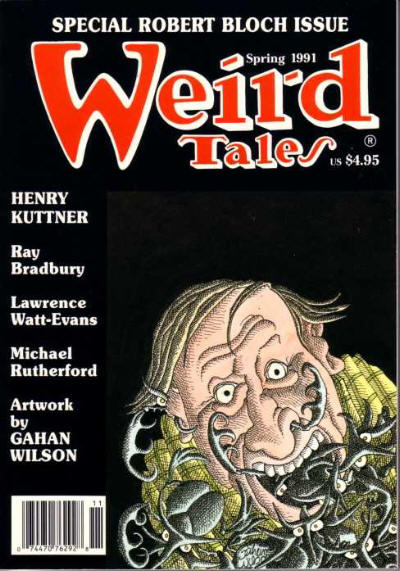 This looks like a great issue to have, been meaning to dive deeper into Bloch's work. I remember really enjoying his novel "The Scarf."

I started reading Robert Bloch back in the 1960s when PYRAMID BOOKS (remember them?) published a couple of collections of Bloch's brilliant short stories. I've been a fan ever since.

And, since you've taken over FRIDAY'S FORGOTTEN BOOKS from Patti Abbott, I've found the list of reviews useful and enjoyable. If some people don't appreciate the work and effort you put into that enterprise, they should try to assemble their own list...and found out how much work it is! Thanks again for all you do!

Todd, I haven't read Robert Bloch, though I have come across his stories in these and other pulp magazines of that era. Frankly, I don't know why I haven't read any yet.

Todd, I'd have to argue that Robert E. Howard indeed was a WT discovery, if I read the sentence correctly. His first professional fiction appeared there in 1925, and it was four years before he got a foothold elsewhere. As a WT newbie, Bloch famously panned the Conan stories, but he seems to have liked Howard's other fantasy/horror tales.

Fred, I see you are correct--I didn't examine which THE TATTLER Howard published in earlier in the '20s, and I see now it was a school paper. I shall have to revise the current text some (though I think Bloch was a more significant writer, and had a wider range of influence, in terms of intensity of influence, it would be hard to gainsay Howard!).