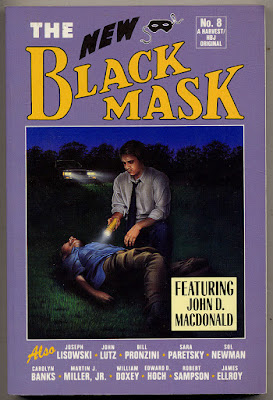 Patricia Abbott: The Expendable Man by Dorothy B. Hughes; "The Midnight Zone" by Lauren Grof, The New Yorker, 23 May 2016, edited by David Remnick, and Short Story Wednesday links

Mark Baker: R is for Ricochet by Sue Grafton

Paul Barnett/"John Grant": The Turn of the Key by Ruth Ware

Larry Clow: Before the Fall by Noah Hawley

Cullen Gallagher: Strange Witness and League of the Grateful Dead and Other Stories by "Day Keene" (Gunar Hjerstedt)

Aubrey Hamilton: Not All Tarts are Apple by Pip Granger; The Rage by Gene Kerrigan

Lesa Heseltine: Hiding the Past by Nathan Dylan Goodman

Kate Jackson: Too Many Bones by Ruth Sawtell Wallis; The Murder at the Vicarage by Agatha Christie

Tracy K: A Necessary End by Peter Robinson; "The Adventure of the Egyptian Tomb" by Agatha Christie, The Sketch, 26 September 1923, edited by Bruce Ingram

Colman Keane: The Hardest Hit by Frank Scalise; Anything Short of Murder by Tony Piazza

Evan Lewis: "The Girl with the Silver Eyes" by Dashiell Hammett, The Black Mask, June 1924, edited by Philip Cody, as syndicated to newspapers including The Vancouver Sun, November 1936; After the Thin Man newspaper coverage/hype, and of Dashiell Hammett, Frances Goodrich and Albert Hackett, the script's collaborators (Mark Coggins: Hammett's treatment published in The New Black Mask #5 &6, 1986, edited by Richard Layman and Matthew Bruccoli)

Steve Lewis: A Bullet for the Bride by Jon Messmann; "The Right Profile" by Carolina Garcia-Aguilera, Hit List: The Best of Latino Mystery edited by Sarah Corter and Liz Martinez

Barry Malzberg: an interview with Cele Goldsmith Lalli (both having edited both Fantastic and Amazing Stories); on The Queen's Gambit by Walter Tevis:

Arguably the greatest novel in our language published in the 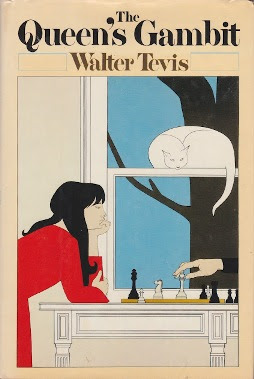 1980's.  I have fiercely advocated for almost four decades.  Martin Cruz Smith's endorsement is on the jacket of the Random House first edition.  ("I would not play chess with Mr. Tevis.")  I knew Walter Tevis just barely well enough to call him in 1982 immediately after finishing and as quietly as possible tell him my reaction, one of reverence.  The Luzhon Defence is superb but Tevis is far beyond Nabokov here.
I feel and have gone public on this three and a half decades ago that Walter Tevis' death at 54 was a tragedy to the arts on the scale of Mozart's passing at 36.  Tevis had remarried, fled that highly contested State, Ohio, was - after a decade and a half essentially lost to alcohol and academy - writing fiercely and well, and had produced four novels and a collection in five years, showing steadily increasing assurance and power.  Granted a Biblical lifespan and an equivalent pace, the world was denied perhaps a dozen novels and two collections of immeasurable possibility.  We are blessed to have these five books after the luftpaus but they are also a taunt, a mockery (or mockingbird if you will).  Maybe the adaptation will bring him back a little.  Fast Eddie's final page in The Color of Money evokes Mozart's final composition.
The trailer for The Queen's Gambit limited series doesn't look so great but I can hope.  All these decades awaiting this adaptation.  The backstory of its journey is as frustrating as Walter's life was tragic.  But I'll leave that narrative to Berlioz or Brahms.
Todd Mason: Weird Tales, Spring 1991: Robert Bloch special issue, edited by Darrell Schweitzer; the 1956 publications of Damon Knight: short stories and In Search of Wonder; The Case Against Satan by Ray Russell; The Devil's Scrapbook by Jerome Bixby

Steven Nester: Not Dead Yet by Daniel Banko

Jess Nevins: English Jack Amongst the Afghans; or, The British Flag—Touch It Who Dare! by Anonymous

John F. Norris: London After Midnight by Marie Coolidge-Rask; Lucifer and the Child by Ethel Mannin

Jason Sacks: We, the Venusians by "John Rackham" (John Phillifent); The Water of Thought by Fred Saberhagen

Marina Sofia: The Beginning of Spring and The Means of Escape by Penelope Fitzgerald

Scott Thompson: Living on Yesterday and The Island of Desire by Edith Templeton

Thanks for the Friday listings, Todd. It's taking longer and longer to scroll down to Comments and that's a good thing but probably a bit of a headache for you.

Thanks for the Brackett review, Prashant...have you considered doing Patti Abbott's story/collection/anthology per week roundelay?

Not a headache, but the curation, as some are terming it, can be time-consuming. I am prejudiced toward choice.

Thanks, as always, Todd. Will you be at Pulp Adventurecon?

Thank you! As always, the links are extremely appreciated. So much to read and learn about. The Tevis book sounds fascinating, I've heard of him but never read him.

Sorry for the delay in response, gents...Jack, thank you, and you're certainly welcome. I'm not sure I'll be at PA, if it happens non-virtually, though the likelihood has become greater in the last few days than it would've been last week.

Walter Tevis, as you've noted I'm sure, Cullen, has written some impressive work, and I'll agree with Barry that there is too little of it (the man died when he was two years younger than I am now, which is sobering on at least two counts). I have yet to read THE QUEEN'S GAMBIT, and I'll need to rectify that. My incomplete review of Tevis's FAR FROM HOME awaits, more patiently than I deserve, my completion of it and publication here. And thank you.