I think these relatively randomly selected 1953/54 issues (important common factor--I have copies at hand, and I haven't read them through yet) will be my next little project for reading...since Bill Crider has been revisiting the Fantastic issues of his youth, and some of Fantastic's lesser contemporaries (Fantastic was a *Much* better magazine in 1953 and certainly in 1959 than it was in the, say, 1956 issues Bill has been rereading--even though Kate Wilhelm's first published story, "The Pint-Sized Genie," was one of the few highlights of the October, 1956 issue). These are the good fantasy magazines of the era (along with the moribund Weird Tales, which would end its first run of 31 years in 1954, and the often agreeable and occasionally impressive Fantastic Adventures, which would be folded into Fantastic the same year) that lasted some length of time (or at least more than a few issues, though Beyond ran for only ten issues in 1953-1955)...and all were eclectic enough to include sf in their remit, Beyond perhaps the least (it was seen as a good financial move...magazines labeled "science fiction" tended to sell better than those labeled "fantasy," perhaps in part because the sf audience could find less of what they liked in the eclectic magazines, pulps and otherwise, and in book form, than could fantasy readers). Certainly Fantastic Universe lasted nearly a decade, with an awkward title that tried to get across its eclecticism (often referred to as the "poor man's F&SF" though publishing some notable fiction, including work by a number of crime-fiction crossover writers and historical fiction specialist Howard Fast), and Fantastic managed to survive consistently neglectful and/or underfunded publishers till 1980, when it was folded into its stablemate Amazing. F&SF continues to publish today, and is joined on at least some newsstands by Realms of Fantasy, a sustained revival of Weird Tales, Cemetery Dance, Space and Time (a long-running sf/fantasy title), Black Gate, Black Static, and such eclectic smaller magazines as Black Clock (is there a color scheme emerging?), among others. 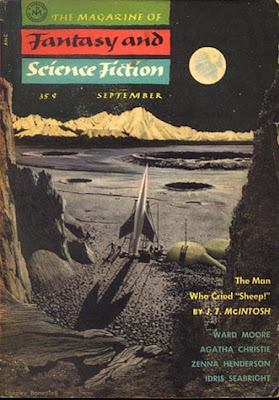 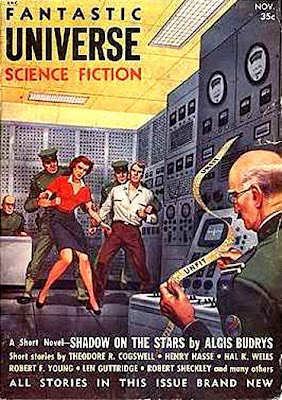 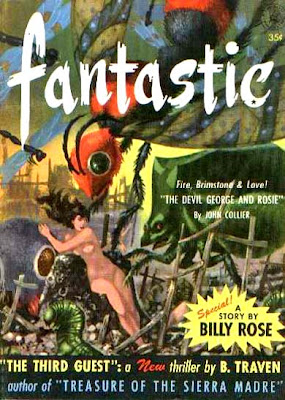 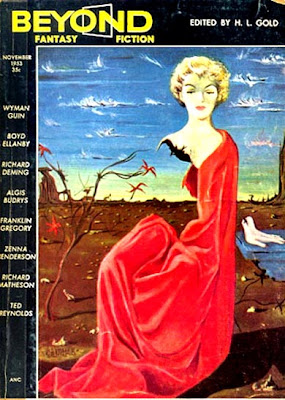 FANTASTIC UNIVERSE (or, also unfortunately, FU) less so than its peers, too often, but otherwise these folks knew what they were about. The early fantasy covers on F&SF by George Salter or Richard Powers's work for BEYOND was very distinctive, and FANTASTIC, even in its worst years in the '50s, was consistently eye-catching.

Those are great. FU had some wonderful flying saucer covers, and I still their cover for Budrys' WHO is an all-time great.

TM linking to the Freas FU cover that inspired WHO? said...

Actually, that Frank Kelly Freas cover inspired WHO? but wasn't for it...despite Budrys having two stories under his primary pseudonyms in the April 1955 issue (possibly a third, depending on who "Ivan Janvier" was in this case...I seem to recall "Paul Janvier" was another Budrys pseud.).

I'm not sure which story it's for, despite Budrys's being touted on the cover. The Burdys story which leads off the BEYOND issue, "The Real People," seems like a working up to WHO? in some ways...at least it deals with similar questions of identity...while also seeming to be a response to such earlier stories as Sturgeon's "The Ultimate Egoist," Heinlein's "They" and Leiber's YOU'RE ALL ALONE...

See the hotlink for the FU Freas cover

I failed to know when posting previously, but the FANTASTIC cover is a non-abstract by Richard Powers...and it's a wraparound, where Shirley Jackson's story is (somewhat pointlessly) advertised. ("Root of Evil").

Also notable...I should mention that Mary Gnaedinger's FAMOUS FANTASTIC MYSTERIES was also able to struggle into 1953...mostly, not entirely, a reprint magazine, and a good one...