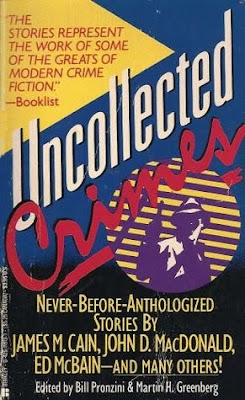 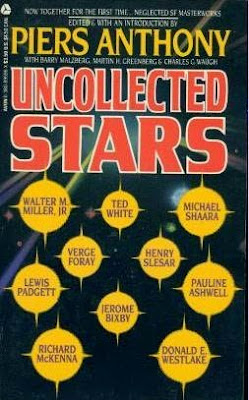 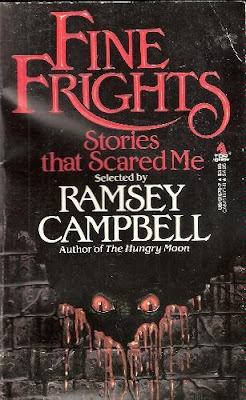 from the Contento indices:
Fine Frights: Stories that Scared Me ed. Ramsey Campbell (Tor 0-812-51670-2, Aug ’88 [Jul ’88], $3.95, 309pp, pb) Anthology of 12 horror stories.
Uncollected Stars ed. Piers Anthony, Martin H. Greenberg, Barry N. Malzberg & Charles G. Waugh (Avon 0-380-89596-X, Feb ’86 [Jan ’86], $3.50, 312pp, pb) Anthology of 16 previously uncollected stories, with a foreword by Anthony and an afterword by Malzberg.
from the Paperback Swap citation (which refers to "Manjunt" magazine)
Uncollected Crimes, edited by Bill Pronzini and Martin Harry Greenberg,
fiction contents (w/o accounting the introduction, etc.)
Publisher: Berkley Pub Group Book Type: Paperback ISBN-13: 9780425116135 - ISBN-10: 0425116131
Publication Date: 6/1/1989
Pages: 240 (after the Walker hardcover, 1987)
[original publication sources taken from Contento/Stephensen-Payne indices and The Thrilling Detective citations of the individual stories, for the most part, when I could find such citations.]
Two O'Clock Blonde -- James M. Cain (Manhunt, August 1953)
Riddle of the Marble Blade -- Stuart Palmer ([Hildegarde Withers], nv Mystery, Nov 1934; reprinted The Saint Detective Magazine [UK] Nov 1962)
The $5,000 Getaway -- Jack Ritchie (ss AHMM May '59)
Squealer -- John D. MacDonald (Manhunt, vol. 4 # 5, May 1956)
The Cackle Bladder -- William Campbell Gault (originally as “The Corpse and the Cackle-Bladder”, nv Detective Tales Mar 1950; reprinted Ellery Queen’s Mystery Magazine [Australia] Jan 1961)
Everybody Needs a Mink -- Dorothy B. Hughes (ss The Saint Mystery Magazine [UK] Jun 1965; The Saint Mystery Magazine [US] Jul 1965)
I Still See Sally -- John Jakes
Homecoming -- Michael Collins
The Deadly Mrs. Haversham -- Helen Nielsen (AHMM, Apr. 1958)
The Problem of the County Fair -- Edward D. Hoch ([Dr. Sam Hawthorne], ss EQMM Feb 1978)
The Tree on Execution Hill -- Loren D. Estleman (ss AHMM Aug 1977)
Bank Job -- Bill Pronzini (August 1978, EQMM)
Discount Fare -- John Lutz (Alfred Hitchcock's Mystery Magazine, April 1979)
Consolation -- Ed McBain (1976, Mystery Monthly)
While Ramsey Campbell was recalling the "lost" stories that had made the greatest impression on him, Martin Greenberg and his collaborators sought out the stories that had never been collected in book form (I could dig out online the magazine appearances for the Unollected Crimes stories faster than I could dig out my copy from storage and copy from the acknowledgements page, I suspect, though maybe not--the only one I'd read in its original magazine appearance was Pronzini's own "Bank Job," in one of the first Ellery Queen's Mystery Magazines I purchased off the newsstand)...so the average quality of the Campbell is greater, but all three books will amply reward the Forgotten Books reader's efforts in finding them...it's almost but not quite an inevitable irony that all of these have fallen out of print, in their efforts to revive interest (Barry Malzberg, never one to let an irony slip away from him, has noted that this was the first book published under Piers Anthony's byline not to earn out its advance--I certainly picked up my copy from a huge remaindered stack in a bookstore, a relative rarity for a mass-market paperback...and, I note, nearly a quarter century later [time does fly] Anthony is now a less potent commercial force than he was in the '80s and has less presence in the marketplace than Greenberg, if still a fair amount in print--and, in a 2021 note while reformatting--thanks a lot, Blogspot, btw--now Greenberg fades from view). The notion that these might be rare treasures or near-(enough-)treasures, often from writers whose careers (at least in the fields the anthologies collect) were unfairly and/or unfortunately brief, is perhaps just not a sufficient motivation to the casual readership, however much it might draw readers such as you or me. The supporting material is useful and interesting in each volume, if thinner than one would like in a few instances (and most amusingly the editors of Stars are not afraid to disagree with and correct each other in their notes.) All three, in the paperback editions (Crimes had a hardcover edition, too...from Pronzini's publisher Walker & Co. in 1987) were produced using acid-soaked paper, undistinguished at best covers (see above), and rather weak bindings (even for paperbacks of their era), so somewhat battered examples of the books are more likely than near-mint ones. But any books that will give you examples of solid work by good, and sometimes even continuingly famous, artists in the fields, and such bonuses in the Campbell as the best unfamous story by Joseph Payne Brennan I've read (and one of the best by him, better than such well-known items as "Gavagan's Back Yard") and Philip Dick's brilliant "Upon the Dull Earth" (I first read it here), are worth the quick search and reasonable expense online or at your favorite well-stocked second-hand store. For much more prompt Friday "Forgotten" Books, see George Kelley's blog, where the vacationing Patti Abbott has apparently made her displeasure with Suicide Girl mascots for the FFB known...
Posted by Todd Mason at 5/28/2010 05:01:00 PM

Wow, Todd! You never do anything by halves, do you? This is an amazing post. I'm trying to process all of it. I have a few of these books, but not all of them. Time to search the Internet (again!)for the titles I lack. Sad that few publishers (other than small presses) are interested in books like this today.

Well, this is my late, rushed version...and you see what it gets me in terms of quantity of response, albeit your too-kind words help make up for that.

I just wish I had my copy of CRIMES at hand, so that the half-assed listing of the contents and sources there could be improved (without poaching from one of Bill Contento's non-posted indices, the one available on CD ROM, that is)...as it is, the sources listed come from a mix of Contento/Stephensen-Payne online indices and THRILLING DETECTIVE citations mostly, search story by story...a quick and dirty job of it.