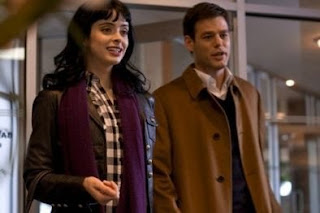 Not quite good enough, are the new series Gravity on the pay-cable channel Starz; and the Showtime Australia series Satisfaction, which has played in Canada on SCN but is debuting in the US on website Hulu. They're not good enough in roughly the same way, in dealing with rather loaded matters (the lives of suicide-attempt surivors in the first, the lives of prostitutes in a relatively upscale brothel in the other) in a soapy and insufficiently fresh fashion, with flashes of wit and occasional honesty met in the next scene or two with predictable hack, or stock setpieces. (You can see at least the first two episodes of Gravity at the Starz site, and ten episodes, perhaps the entire run, of Satisfaction at Hulu--though since it's rated TV-MA, S, you'll have to sign in).

Krysten Ritter plays Lily Champagne (no less) in Gravity, a young woman who works at a makeup counter in a department store (in mentioning this, she immediately appends "I change lives..."; it's a good joke the first time, an indication of her boredom the second time, and of her desperation by the third time...this might be the most innovative touch in either of the first two episodes, and well put across by Ritter, who resembles a somewhat more dollish Anne Hathaway...with large facial features like Hathaway, and thus the brightly contrasting makeup Lily favors makes her face look more awkward and vulnerable than it might with more subtle shades. She makes an almost unwilling connection with Ivan Sergei's Robert Collingworth (character names are Not a strength of the series); they meet cute with a ridiculously zipless coupling outside their court-ordered twelve-step meeting. It's all trying very hard to be distinctive, and just doesn't make it...though it's not unwatchable nor genuinely bad, just not different enough from the difference-splitting between HBO's Six Feet Under and Showtime's Dead Like Me that it so clearly is descended from. Starz's somewhat improvisational sitcom Party Down remains their best series by some distance, with Megan Mullally in for Jane Lynch, and Mullally proving that she could make about as convincing a Sarah Palin as Tina Fey does. (Episodes available on the Starz site, as well.)

Satisfaction is no less derivative, though it features a game Australian cast who are clearly engaged in an attempt to create a local franchise of the UK's Secret Diary of a Call Girl, which plays on the Showtime mothership in the US...and on broadcast television in the UK. There are more confrontations than one might expect in any workplace that isn't a bar or a prison, probably more than most bars. Lotsa declamations of potted attitudes about sexual politics, etc--why, don't you see that pros are simply wise enough to get paid for what other women Give Away for Free, some wise and some pompous characters note, depending on the point this or that script is trying to make. About as much flesh on display as Starz's perfervid Spartacus or HBO's dour, one-season Tell Me You Love Me, more than Call Girl or the male prostitute sitcom Hung...but the US remains probably the most prudish of Anglophone countries this way...

Such other new series as CBS's The Good Wife, HBO's Treme and FX's Justified remain much more impressive in nearly every way, and I'm still enjoying veterans such as Fox's House and AMC's Breaking Bad...and the sitcoms NBC offers on Thursday night, with this week's Community, a parody of take-no-prisoners action/suspense films, striking me as particularly amusing in a good bunch. My sneaking fondness for the often goofy spy dramas Chuck (NBC) and Burn Notice (USA) continues pretty much unabated. It's a pity there are no first-rate fantasticated series on the schedules, at least moreso than the technothriller-esque hardware and paranoia of the spy series. But you can still see the fine Journeyman
on Hulu, and the nearly as good Other Moon Bloodgood timeslip fantasy Day Break there as well. At least the two surviving vampire series, True Blood(HBO) and Vampire Diaries (CW) have at least some intermittent charm.
Posted by Todd Mason at 5/08/2010 02:15:00 AM

We lost Starz and consequently PARTY DOWN, which my husband particularly liked. Yes, JUSTIFIED, THE GOOD WIFE, TREME and BREAKING BAD plus the NBC comedies about fills out our week. HOUSE is too scary for me. I tried to like CHUCK but only the occasional ep. worked for me.

Hey, Patti, are you checking in from Europe, or were you grounded by volcano? Follow the links, either of you, and you can see PARTY DOWN on the web...I know that hasn't been your favorite means of viewership, but there 'tis.

I am not wishing I had more television channels. Then again, I've been watching eps of Hancock's Half Hour mostly lately. And some old Buffy eps, too.

Go on Saturday. Ash begone. I try to go in through the web but no luck.

Ah...I took references to Saturday last week to mean the day before yesterday.

HANCOCK I'll need to go look at. I must admit I've taken advantage of their posting on Hulu to listen to the balance of PEEP SHOW episodes, having seen only the first season previously...a curiously depressing series when taken as a whole.

THE GOOD WIFE, in having in its most recent episode Sarita Choudhury (she who began acting with MISSISSIPPI MASALA, and was a very happy addition to such fine series as HOMICIDE: LIFE IN THE STREETS and 100 CENTRE STREET) in a guest role, is now reaching toward ONCE AND AGAIN or HOMICIDE territory in the number of actors who might be in my Rule of Three lists among mild media crushes or inspirations of not so mild lust.

I wondered about GRAVITY-not much or for very long, but I did wonder. (I'd like to check out this zipless coupling you spoke of, though) As I've told you before, I'm not willing to commit to any new series. I'd much rather enjoy the quick, passionate one night stand of a 2 hour movie.

The brevity of your curiosity about RELATIVITY isn't unjustified...by its fourth episode, it's getting cloyingly kute, despite a game cast and a still mildly engaging overarching premise.

Hey, a two-hour or so film doesn't make any demands...you want to see me again, dial me up...