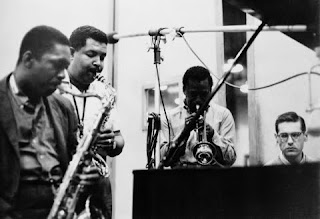 NPR's Guy Raz punted an interview with pompous British jazz fan Richard Williams, and it was broadcast on Saturday, as the last (more than) ten minutes of an hour of "news"...which would've been fine if Williams didn't do such a fine job of convincing me that his book was an even more overblown attempt at intellectualization than Greil Marcus's Lipstick Traces.

Williams's thesis is that the Miles Davis Sextet album Kind of Blue was a singular catchpoint in cultural history, in part because it's one of the most popular albums in jazz...as if things don't tend to become more popular because they're already popular (Kind of Blue has become the best-selling album attributed to Davis, but I believe both Sketches of Spain and then Bitches Brew had outsold it until relatively recently). In the process of mentioning how Davis magically came up with modal improvisation, without once mentioning how Bill Evans brought the concept to the band after working with the originator of the concept in jazz, George Russell, Williams does as a European congratulate European whites for letting the young Davis meet Jean-Paul Sartre nearly a decade before the album was recorded...you see, Davis, as a black (American, non-Algerian or otherwise African "colonial," non-Caribbean) was able to be exposed to a ferment that the intellectually deprived folks back home, such as Langston Hughes or Zora Neale Hurston or James Baldwin (to say nothing of African-American intellectuals who never toured Europe at all), just missed out on.

"What I wanted to do was look at the what I conceive to be the effect of Kind of Blue on the world," Williams tells host Guy Raz. "Not just on jazz either, because I do think of Kind of Blue as a kind of lens that focused a set of feelings that were around in the late 1950s, and really then disseminated them to the world of music as a whole." Thus is Williams quoted as a teaser on the NPR page for the archive recording...not the worst passage, but still bloviation, since the kind of pensive approach demonstrated by Kind of Blue was of a piece with any number of albums in the Cool, West Coast, Third Stream and Chamber Jazz modes coming out in the years before KOB was released. Of course, given the cults that developed around Davis, Evans and John Coltrane over the years, it is almost inevitable that this record would become a touchstone for half-educated hipsters...and it's a fine album. Guy Raz proves he falls into that category with his ignorant question about the Birth of the Cool sessions, recorded at about the same time youngish Davis was hanging on the Left Bank, but not released till the latter '50s when they were, for commercial reasons, attributed to Davis as opposed to more properly (like the orchestral albums Sketches, Porgy and Bess and Miles Ahead) being largely credited to Gil Evans, who hosted the collaborators to the Birth sessions and put together the sessions for the later albums with Davis as featured soloist. Raz says, hey, wow, Birth was pretty straightforward bop, eh? Remarkable that nine years later that Davis sounded so different, hah? To his credit, you can almost hear Williams's distressed expression at such an ignorant softball, since Birth is very much not straightforward bop and it's not particularly surprising that even as self-important an artist as Davis might evolve over a decade of his early adulthood.

Miles Davis was perhaps the most awful person who was a major artist in jazz, and it's remarkably stupid at this late date to be attempting to further the cult of this serial spouse/partner abuser (most famously of wife Cicely Tyson), a guy who exploited his disproportionate sway with sycophantic fans and would-be tastemakers to try to ruin the careers of artists such as Coltrane, Cecil Taylor, and Ornette Coleman, and for most of his last years a remarkably dull performer (except in those rare occasions when he chose to actually play). Particularly when, at least in the lengthy promo for one's book on the record, one is ignoring its actual significance in favor of more mythmaking.
Posted by Todd Mason at 5/10/2010 11:19:00 PM

Email ThisBlogThis!Share to TwitterShare to FacebookShare to Pinterest
Labels: jazz; Kind of Blue; the inadequacy of NPR

Never been a Miles Davis fan. I like Monk, Evans, Brubeck and a bunch of others a lot more. I like me a tune, I guess.

Well, you'd like a lot of Davis in the latter '50s, when he got his chops up (and learned that he would never be as pyrotechnically dexterous as a Dizzy Gillespie, so went for melodious approaches instead) and the early '60s, before he started to move toward fusion that wasn't as interesting as that of many other folks' fusion recordings. The Gil Evans Orchestra album PORGY AND BESS, some of his last Prestige records such as WORKIN' and STEAMIN', CBS releases such as ROUND ABOUT MIDNIGHT and on up to about NEFERTITI. Mosaic's COMPLETE BLACKHAWK sessions, and, of course, KIND OF BLUE, to hear the best quintet Davis had, with Evans, Coltrane, Chambers...Philly Joe Jones when he was there.

Great blog post. Although I've always enjoyed the electric albums more (Bitches Brew, On the Corner), Kind of Blue is cool too.

Glad you liked the post...and while the fusion albums are the least favored by me of Davis's records (but I like the earlier adventurous ones a little better than the duller funk ones later on...it helped that he was working with some promising folks early on, less true with the later ones), I can certainly see preferring them to KOB, if 1950s jazz isn't one of one's musical "homes"...also amusing, given Davis's noises about how the free players, including Coltrane, were playing "anti-jazz," how much his early fusion albums resembled free jazz, ten years later...