Three collections, none definitive, all rewarding. 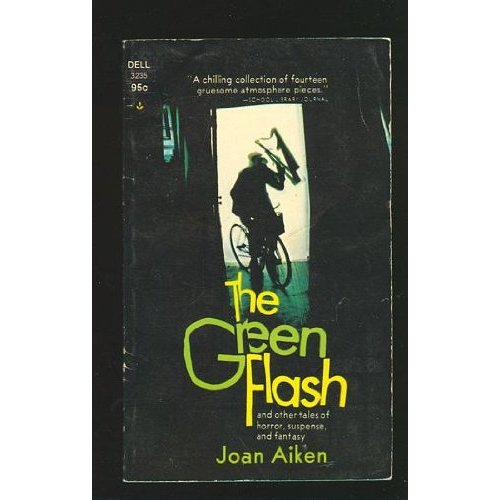 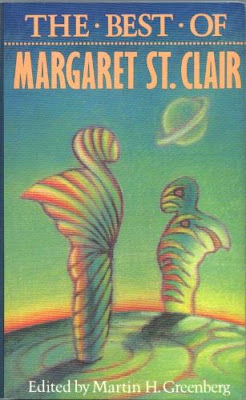 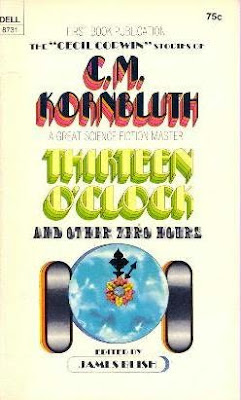 Three books that give a sense, if not the fullest sense, of what their authors were capable of. The Green Flash is a decent cross-section of the short fiction of Joan Aiken, with an eye to her younger audience who had found her through The Wolves of Willoughby Chase and its companions...but not incompatible with the interests of her gothic readers, if less so perhaps with her more straightforward romance-fiction readers (and surely welcomed by those who'd known of her short fiction over the previous decades). "The Green Flash" itself is a charming bit of misdirection, and it introduced me to the notion of the rarely-seen atmospheric prism effect of a green flash at sundown. "Marmalade Wine" is perhaps the story which sruck me hardest at the time, neat and vicious, while "The Windscreen Weepers" manages to overcome its weak title conceit (and apparently was a particular favorite of either Aiken or her book editors, as most of these stories were drawn from an earlier, more comprehensive collection that took its title from this one). 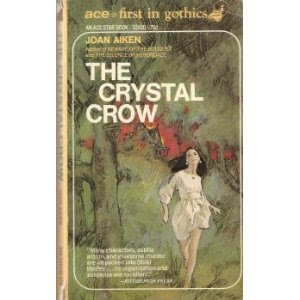 I'd been looking around (for a post last year) for a good image of the handsome cover Ace put to her The Crystal Crow, and managed to finally find it...though not the the more "edgy" cover that at least onne other of her gothics for them sported. Meanwhile, her other work in this mode seems also likely to be more interesting than the usual run of the gothic lines of the times, including her Heyeresque sequelization of Austen: 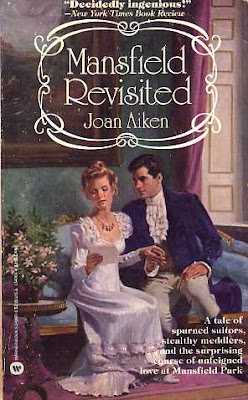 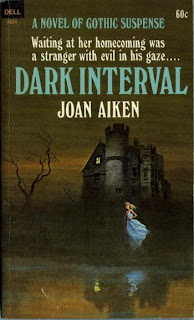 Margaret St. Clair has been only very inadequately represented in collections so far, despite a decent selection in the Greenberg compilation, which nonetheless slights her fantasy and horror work in favor of her sf, I'd say...also true of her other two, earlier collections. 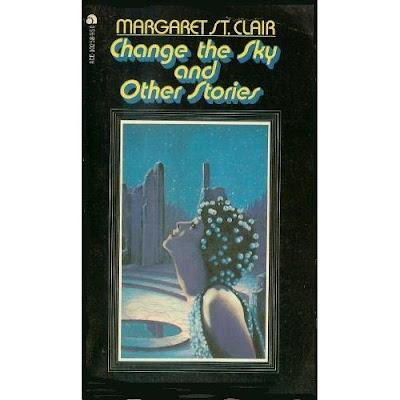 I've had the great pleasure to read some of the stories I hadn't realized were uncollected (at least in a volume of her work), particulary from St. Clair's run around the turn of the 1950s in Weird Tales, while for reasons I'm not yet clear on, she seemingly preferred to publish as "Idris Seabright" in The Magazine of Fantasy and Science Fiction in the same years. 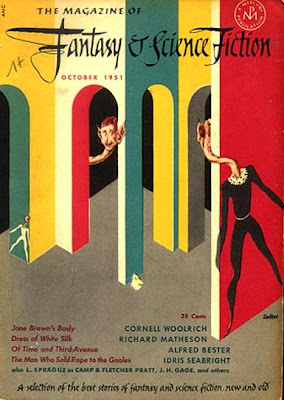 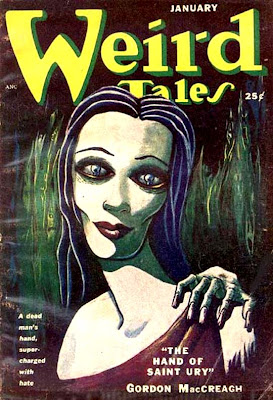 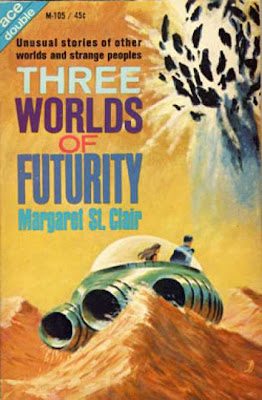 Here's the issue of WT featuring St. Clair's "Professor Kate" and the F&SF with Seabright's "The Man Who Sold Rope to the Gnoles" (featuring two cover creatures capable of some serious necking, if so inclined). Her sf could often track back to the horrific as well, as with the fine Galaxy story "Horrer Howce," but the absense of such stories as "The Little Red Owl" (WT, July 1951) is felt in the MHG selection. St. Clair could use a fat NESFA Press career-encompassing collection. Otherwise, one might need to buy this Famous Fantastic Mysteries issue to read the only other story in it aside from the cover novella, St. Clair's "The Counter-Charm"...or to seek out this fine issue of F&SF for, among others, St. Clair's "Sawdust" (not that some collectors wouldn't appreciate the mammary attention of artists Lawrence and Freas): 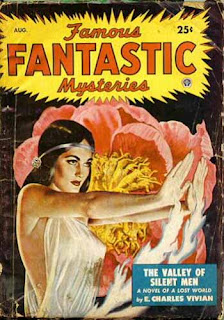 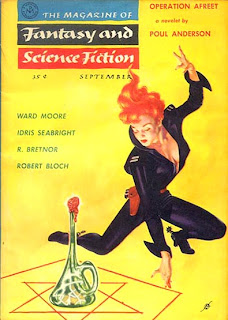 Happily, C. M. Kornbuth, at least, has already had a NESFA Press retrospective, more than a quarter-century after Dell published this interesting project, interesting in part because Dell felt it worth publishing a collection focusing on the Very early work of a writer, still in his teens when seeing most of these published, who had never quite gained his commercial due (and a man who loved to publish under pseudonyms of various sorts, in part because most of the stories collected here were among several by Kornbluth under various names filling each of the issues of his friend Donald Wollheim's nearly unbudgeted pulp magazines Cosmic Stories and Stirring Science Stories)--even if Dell gave it as little support as possible. James Blish takes some arguable editorial liberties here, in combining the first two stories, and refuses to include a fragment, published much later than most of these, under the Corwin name but apparently without Kornbluth's permission. "Thirteen O'Clock" is famously the young Kornbluth at his most antic, "The Rocket of 1955" first displaying his bitter black humor and trenchancy (to come to full flower in such stories as "The Marching Morons," emulated, to be kind, in a dumbed-down fashion without credit by Mike Judge's film Idiocracy), and has become one of the classic vignettes in science fiction, after extensive reprinting from the little magazine or fanzine (depending on one's point of view) that first published it--Stirring Science Stories was the first to reprint it, in this issue: 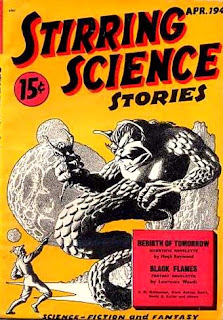 The existence of the NESFA His Share of Glory volume almost makes this volume retroactively redundant, but the omnibus doesn't include Blish's notes nor the version of the conjoined stories presented here.

As with the other books and other work under discussion here, eminently worth seeking out.

Three truly deserving choices, Todd. I have been a fan of Margaret St. Clair for years and, yes, a NESFA volume would be wonderful. The Kornbluth NESFA is amazing but, as you pointed out, lacks the Blish notes and has type that almost makes a magnifying class necessary.

Great choices, Todd. I'm a fan of all three authors and have read most of their books. I am particularly fond of Aiken's Armitage family and her Mortimer stories. St. Clair's work still amazes me. Kornbluth was one of the best writers in the field, and
(going outside the field) isn't it time for some publisher to bring an omnibus of his "Jordan Park" books? (Are you listening, Stark House? Ramble House? Anybody?)

I also ditto Scott about a St. Clair volume.

You've picked three wonderful writers! Kornbluth is a favorite. I've liked everything of Margaret St. Clair that I've read. I have a lot of Joan Aiken books stacked up. I need to read more of her work.

I need to remedy my lack of St. Clair. Seriously.

I don't know Aiken at all, but I am in total agreement about the other two. BTW, if I recall correctly the St. Clair book doesn't mention that the nice future-landscape science fiction cover is actually taken from a still of Alla Nazimova in the 1923 movie of Oscar Wilde's Salomé, with a production design based on the Beardsley illustrations:

Steve--Thanks for that. Scott Cupp's entry for this week's roundelay is a collection of Henry Kuttner stories in the DOC SAVAGE mode, with a cover illustration lifted from THRILLING ADVENTURE that looks for all the world like a Buster Crabbe FLASH GORDON poster...for that matter, the Freas illo, if it isn't of a redheaded Marilyn Monroe, could be. The Lawrence woman also looks vaguely cinematically familiar. What a boon to the painter, photogoraphy, no?

As you can gather, I'm rather happy about all three writers, and Aiken was the most prolific, I think...the English daughter of a Canadian mother and the American Conrad Aiken, most famously a poet but his "Silent Snow, Secret Snow" is a horror short-story chestnut.

Kate--perhaps something can be done about that.

George--I've read so few of Aiken's novels that I have a large repository awaiting me. I have to wonder how her Regencies stack up to Heyer's.

Jerry--I'm not sure whether I read on Frederik Pohl's blog that someone was in the process of putting some of the "Park" novels back in print...I should check.

Scott--As with some other volumes, including revival volumes under discussion today, the NESFA volumes' biggest problem by me is bad proofing...since I'm basically in need of reading glasses anyway, small type isn't necessarily dissuasive...down to a point, or at least five-point type, at least (Bantam and some other vintage paperbacks can be a challenge...latter-1970s Ace books, on the other hand, are all but default "easy eye" books (and the collapsing Lancer tagged its Magnum line, a good cheap source of classics in my youth, as the discount department store WT Grant's sold them and other Lancer titles for a quarter apiece in 1974 and '75). (That was where one got one's Scout paraphernalia and ViewMaster packets and 8mm Castle film abridgements of horror features and travelogues, too...)