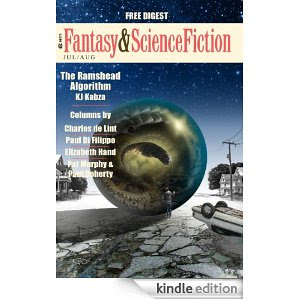 I haven't committed to an e-reading device/system yet (unless we count PDFs on home computers), but thought I'd mention the new Amazon offer for The Magazine of Fantasy and Science Fiction...a free sampler that gives an issue's nonfiction contents and one piece of fiction, and/or a $12/year subscription to the full contents...which, on a Kindle, would mean mostly you don't get to see the handsome colors of most of the covers, but otherwise doesn't lose one too much (until Amazon starts erasing text out of their subscribers' machines again--Amazon in announcing this has already flubbed in at least two small ways, including in estimating that $12/year works out to 99c/month...a lot of math majors in the promo dept, clearly).