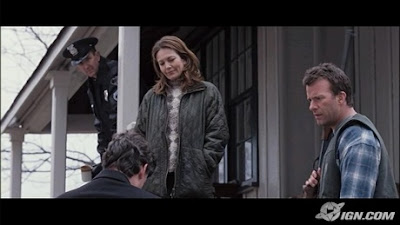 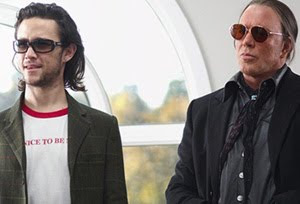 Killshot is an example of what happens when a decent film doesn't have any champions at its studio, which in its turn decides to trust marketing rather than the market. Based on an Elmore Leonard novel I've yet to read, and apparently approved by Leonard in a longer cut than is currently available on cable or on home video, it stars Diane Lane and Thomas Jane as rare survivors of attempts at mayhem on the part of a hitman, played by Mickey Rourke and his new sidekick (Joseph Gordon-Levitt), an impetuous punk in all the worst senses. Gordon-Levitt's masochistic girlfriend is played by Rosario Dawson, and one of the targets of Rourke's hits is portrayed by Hal Holbrook...not, on balance, a money-losing cast. The director, John Madden, has done both creditable and profitable work (most obviously British tv crime drama such as Prime Suspect and Inspector Morse, and the film Shakespeare in Love) and the script, good enough certainly even in the current cut-down form, is by Hossein Amini, probably the weakest link here by CV, though this might be his best work...he captures the flavor of Leonard's fiction (again, without my having read this particular novel, the criminals are suitably unpleasantly criminal, and not just lovable wackos or losers who just happen to murder people). But this was apparently one of the aspects that kept this film, which completed shooting in 2006, from being released in any form until late 2008, after one of Harvey Weinstein's famous dithering jobs on it, cutting it over and over, announcing it would go directly to dvd, then setting up a theatrical test-run (they put it in five theaters in Arizona, iirc, for a week), all driven in large part by focus groups who found it difficult to relate to the criminal characters... 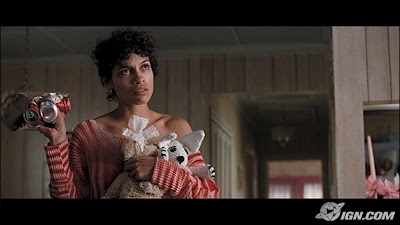 It's not, in its severely cut form, a great film, but it's a good and stylish one, which within what's left of its focus deals rather well with the marital problems between Lane and Jane's characters (mainly their pain, doncha know) as well as the continuing attraction between them...and the high price they have to pay for playing along with the authorities' attempts to protect them as witnesses, while also deftly sketching in the ways in which Rourke's hitman sees himself as rather nobler than he has any right to do, and how Gordon-Levitt's desperately inflated self-opinion also causes problems for everyone around him (many reviewers have complained about the over-the-topness of JGL's performance, but I think it a very good embodiment of the type of mean furniture Leonard enjoys offering in his stories). Dawson, as the kind of woman who falls for Bad men, is believable, as is the dialog, and even as presented there are no major threads left hanging. It's worth your attention, and deserved much better treatment than it has received.

As this week has been mostly lost to the grippe, I saw more television per se than I might've otherwise, and thus have made the acquaintance of the CBC series Intelligence, as repeated on the Canadian cable station MAV TV (an analog of the US's young-male-oriented Spike, only with more motorized racing coverage in most dayparts and more Canadian crime drama in the overnights). Producer/creator Chris Haddock, who previously offered Da Vinci's Inquest/Da Vinci City Hall, in this 25-episode, two-season series (not counting the 2005 movie that served as pilot) in 2006-2007, has a nice bit of complexly worked out intrigues, between Klea Scott's director of the British Columbia offices of the (national CSIS) Organized Crime Unit in Vancouver, and her mole and also client for two-way info passage Jimmy Reardon (Ian Tracey, also a regular in Da Vinci), high in the primary (rather improbable) pot but not so much other drugs-trade Organization in Vancouver, and their various underlings and colleagues...Matt Frewer is unsurprisingly present and good as another high-level cop. Oddly enough, despite rather good sales internationally (if not in the US), the CBC apparently wasn't too supportive of this series (which among other things casts a disapproving eye on how US government interests muck about in Canadian affairs) and so it was restricted to two short seasons. Aside from Netflix and MAV, available on Verizon and probably some other US cable systems, I'm not sure this series has been made available to USians in any form, which is a pity. Also not lifechanging, but worth the look.
Posted by Todd Mason at 8/09/2011 03:54:00 AM

Missed both of these.

(RE: Killshot) Looks like an interesting film, Todd. I had to do a quick take with JGL. The hair threw me off.

Hi Todd, are you not listing all contributions this week? Or has the meme moved on to someone else? Just wonderin'.

I'm not familiar with either of your mentions. But then I don't think I'm quite the audience for an Elmore Leonard film. (Though I do occasionally read his westerns.)

I did - when I had cable - occasionally watch DaVinci's Code. Did I get the title right? So I'm fond of that sort of Canadian show.

I'll take a look at this new one if it's available on Netflix.

I have not heard anyone refer to it as the grippe in ages. But perhaps in the Philly area, they still do. At any rate, feel better soon.

Well, Patti, they're here because they were easy to miss, even if you were watching the Windsor CBC station (CBC kinda buried INTELLIGENCE). Thanks...I have various reasons to refer to it as the grippe, including discussion with a Hispanophone woman of my acquaintance ("gripa"), and it has its grip on me still, thanks for the get-wells, folks. As you might see, Yvette, the links are up, later than I'd like but there they are...and you have hit upon the same film as Ron Scheer did. DA VINCI'S INQUEST (and DA VINCI CITY HALL), actually...THE DA VINCI CODE was something else again. Indeed, Iba...that was close to his juvenile look on THIRD ROCK FROM THE SUN.

Thanks for participating and commenting!

Never heard of any of them. I've fallen hopelessly into the pit of film apathy. If you don't believe me, see my comment on Patti's blog under the Bad Girls post. I have a film from Netflix I got in January and have not opened it yet. The only reason I haven't sent it back is that I don't want the next one on the list to sit here for months too. I just found out the new cat has been urinating on my favorite (expensive) leather chair. For weeks apparently, as I haven't been sitting in that room lately. I need a nap.

Your apathy might be spreading, Rick...this week's is the least-viewed list of film links by a considerable distance, even with a similar distribution of link notes (diminishing returns?). Though this is a typical number of hits on my own review post here, higher than a number of them.

Alice's tomcat was feeling stressed by the advent of a new female adult stray (a voluble ex-street cat, but half the size of the tom or his longtime companion, a female who is dominant), and was spraying (after a run of eating grass and vomiting around the house...full of charm, this Domino), but it seems he's gotten over that (and most of his targets were easily cleaned, including the soaking he gave to all three cat-carriers). Good luck with cleaning the chair...

It wasn't spraying, though the cat has done that too, it was full on peeing, using the chair instead of the cat box. The thing is wet through. Consulting with an upholstery cleaner resulted in a verdict of no hope. The beautiful leather chair, 5 months old, has been hauled off to the dump. So much for that 1,100 bucks.

Sorry to read it...furniture insurance, with helpful felines about, perhaps is a useful thing. (Then again, given insurance companies, probably not.)

And, perhaps because I added photos?, the hit rate on the links list shot up to normal levels in the second day. Small mysteries of Blogspot/blogging generally...