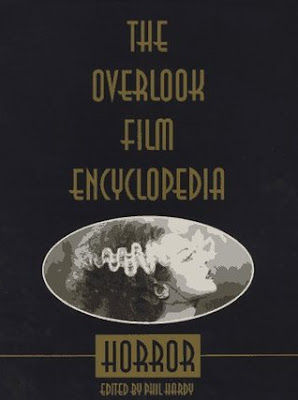 Here's the second and so far final edition (1993, after 1985) of one of the more impressive, if deeply flawed, reference/critical works in horror film; among the flaws is that the entries are unsigned, so that one can have the fun of trying to suss out if it was Kim Newman, Tom Milne, Paul Willeman, Julian Petley, Tim Pulleine or editor Hardy, or some combination, who are responsible for one opinionated entry or another. Another rests squarely with Hardy and his publishers and their editors: to make room for new content, two relatively minor films were dropped from this edition (albeit everyone who loves horror in my generation of USians has at least heard of Don't Look in the Basement), while all kinds of questionable inclusions (Sorority House Massacre, Three O'Clock High as examples from either end of the suspense film quality range featuring psychopaths) continue...and similarly quasi-relevant work (say, El Topo) is missing, or, like Kongo, only mentioned in the entry for a film it's closely related to, as in this case as a non-silent remake of West of Zanzibar. Less of a judgement call, the index is all but useless unless you know the title or the common alternate titles of a film they offer a primary entry for; it a title is only mentioned in the text of a primary entry, good luck finding it, as with Kongo. (They have cogent things to say about the most obvious horror and horror-related films of Ingmar Bergman, but no entry in the index for The Devil's Eye, or Wild Strawberries, with its notable nightmare-sequence beginning...which would be more forgivable without full entries for the likes of Fatal Attraction.) And, as almost everyone complains about this book, it's no dry simple compendium of facts, but an often self-contradictory repository of strong opinions; someone on staff really hates Robert Bloch's scripts (without noting how much they were meddled with by the likes of producer/directors William Castle and Milton Subotsky, which one would think might be the purview of a book such as this), while someone else makes a point of praising (justly, I'd agree) the likes of the mistitled (not by Bloch!) Torture Garden (someone presumably had a copy of Octave Mirbeau's novel kicking around the office).

But in this enumeration of some of the faults of the book, I think you might be gathering some of the virtues: it's by no means a comprehensive account of all horror films made (it misses a whole lot of video-only items, including such cult gems as Trancers and Subspecies 2, while noting others as it occurs to them to do so; Japanese and some other east Asian horror filmographies are given a reasonably good representation, but hardly a thorough one, and Korean films--admittedly a booming business in the years since--hardly represented at all), it is in its nearly 500 oversized pages full of informed consideration of a wide range of horror film, including any number of obscurities that might be new to all but the most knowledgeable fan/scholar. It's the kind of book that lends itself to an online or at least hypertextual sequel, and is worth your attention if you come across it. I can see why it's fetching such large prices on the secondhand market. Thanks to Kate Laity for the gift. 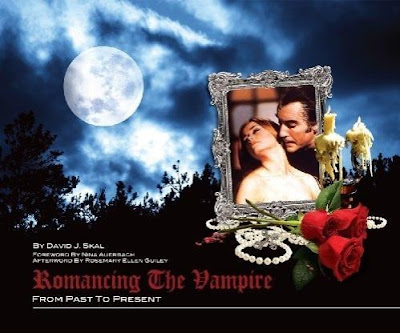 Meanwhile, David J. Skal's book is a charming example of what might even hold together better online, but would lose precisely its tactile gimmicks. Skal, who could write the text of this survey of vampires in popular culture in his sleep, has that rather deft (and non-automatic!) text augmented by even more illustration, all in full color when the original is, and with the kind of tipped-in paper ephemera that did so well for Griffin and Sabine and its sequels a decade or so back; as such, this must be, if not the most expensive book Whitman Publishing has ever attempted, then certainly the most elaborate I've seen. (It comes, in its conceit of being a true scrapbook, with an unattached male vampire face mask, as well as with postcards, film-strip-like photo arrays and more in pouches or taped onto the pages.) At 144 augmented pages, all but necessarily slipcased, it sure isn't a Big Little Book while certainly also being a rather fat big book, and given the number of copies available at the picked-over Borders stores I've been visiting, it probably didn't do well...like the Overlook/Horror originally priced at $50 (well, minus 5c and in 2008 rather than 1993 dollars), you can currently get one at a Borders so endowed for $3.75 (less if you have the discount card, which will no longer be honored after Sunday). Eminently worth the effort to take the look.

I've got the western and science fiction books in the series. They are pretty fascinating to browse through, but even the most basic plot descriptions can be wrong. Oh, the pre-VHS film research...

Well, soundly in the VHS era, but before the web and certainly before streaming video...

I'm not a horror fan so I'm not the audience for this book, but I do love 'encyclopedias' of film. I have an old movie westerns one and an old movie musicals one - not technically encyclopedias, but close enough far as I'm concerned.

I think next week I'm going to talk about my 'robot' book. You'll appreciate it, Todd. :)

I'm discovering all sorts of things on my bookshelves lately, searching for things to write about.

I enjoyed reading your post, anyway, Todd. That ROMANCING THE VAMPIRE book sounds like a hoot. It would make a great gift for the vampire aficionado on your list. :)

It almost certainly wouldn't offend the vampire fans one knows, Yvette, and David Skal, a talented fiction writer who has published a lot more nonfiction about fantastic fiction and folklore over the last couple of decades, is usually worth reading, at least...and thanks for the benisons about the post even when the subject matter wasn't of typical interest to you.

One of the advantages of doing exercises like these is that they indeed will send you to back to your old favorites or to finally try things (or to go out of your way to expose one's self to things) that one had been meaning to get around to. I'll look forward to which robot book that might be (Capek? Bradbury? Asimov? Sladek? ...?).

I'd buy you a copy of the Skal if it wouldn't just sadden you in its camel's back strawness (but it's light enough to mail to Ireland).

Unlike Juri with the companion volumes, I haven't found any actually Wrong articles (but Hardy credits Kim Newman with going through everything and straightening things out), just lotsa contentious items...whoever wrote up THE HAUNTING, for example, was as unimpressed as the Bloch-buster. And as incorrect in that opinion. Thanks again.

I used to have a copy of the first edition of Hardy's encyclopedia. While I remember referring to it quite a bit in those pre-Internet days you're right in saying that it was far from complete. It was very rare to see an entry for a non English speaking film and straight to video titles usually went right under their radar. Also I often wondered if the authors had actually seen some of the older, not on VHS movies they wrote about. It would be much easier to put a book like this together today but I'm not sure what the point would be. It seems like one could get the same or better information just by checking the (admittedly not always reliable) IMDB. Still, back when books like this were the only game in town, this one was the one to beat.

Jeff Segal wrote me in email about how much the first edition put him onto new items, even with its faults, as well...yes, and there are other more focused sources flourishing now which are more or less valuable than the average IMDb listing (particularly now that IMDb is a business venture rather than a true crowdsource project), albeit usually idiosyncratic as well.

What are the chances of two Yellowstone Kelleys.

Pretty amazing coincidence (and, as I mention, it's pretty amusing as well how differently Ron and Yvette take the films, Yvette as exoticized beefcake-fest perfect for her teenage delectation, Ron as an amusing variation on history as well as amiable drama...and with a bit of cheesecake, recently viewed on Encore Western cable)...though the post this applies to is a little later in the temporal thread.