FFB: Helen Hoke, Seon Manley and Gogo Lewis, Michel Parry, Hugh Lamb and Some Other anthologists of my early reading... 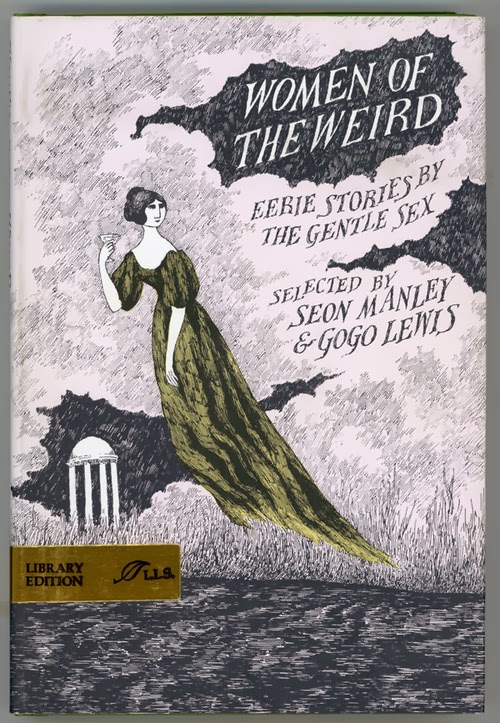 While I've written a fair amount about magazine editors, and such (and sometimes Also*) anthology editors as Robert Arthur* and Barry Malzberg*, Ellen Datlow* and Jerome Charyn, Betty M. Owen and Dwight Macdonald*, Bill Pronzini and Joe Lansdale, Gerald W. Page* and Nelson Algren, Henry Mazzeo and Judith Merril, Jessica Amanda Salmonson* and Harold Q. Masur, Marcia Muller and Ann VanderMeer*, Harlan Ellison* and Robert Silverberg, I haven't yet touched much or at all upon at least five anthologists important to my early reading: Helen Hoke, (Ms. and Ms.) Seon Manley and Gogo Lewis (names that are hard to forget), Michel Parry, and Hugh Lamb--all of whom contributed to the enjoyment of horror and suspense fiction, and more. 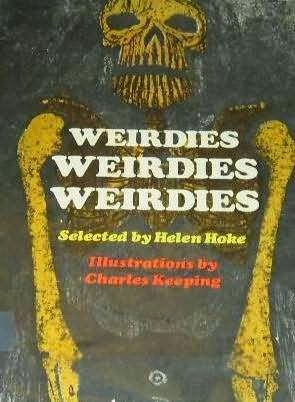 In the late 1930's, Ms. Hoke inaugurated and managed children's book departments at several publishing houses, including Henry Holt, Reynal & Hitchcock and Julian Messer. In the 1940's, Ms. Hoke, whose first marriage, to John Hoke, had ended in divorce, married Franklin Watts, founder the New York publishing company that bears his name. She became the company's vice president and director of international projects.

But it was her horror and humor anthologies and compilations that I remember, particularly the former...she relied mostly on chestnuts, but intelligently arrayed, and for young readers, this isn't the worst strategy. From ISFDb:

...and so, I missed the preponderance of her work in the horror and fantasy fields, having left behind the younger-readers' sections of libraries by 1976, but I do remember the early volumes well, with their often rather uninspired covers, but usually interesting content (ISFDb, again):

My first encounters with at least some of this work, and not mine alone...

Seon Manley and Gogo Lewis in their turn didn't specialize as thoroughly in books for younger readers, but mixed their bags sufficiently that some librarians probably put a few aimed more at adults in the juvenile sections...when such things happened where I could see them in the early '70s, my feeling were rarely bruised:

ISFDb, unsurprisingly, doesn't choose to list their criminous anthologies, of which there were a few, and such outliers as Cat Encounters: A Cat-Lover's Anthology or the nonfiction anthology Polar Secrets.  As WorldCat notes, this couple could turn in an impressive (and feminist, particularly given the ironic subtitling) compilation of crime-fiction, as well: 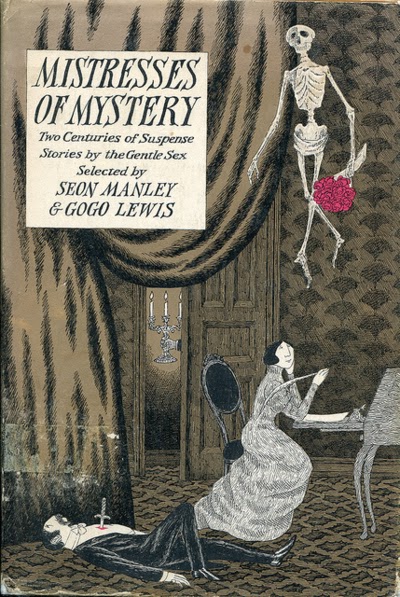 ...the Edward Gorey covers, when they occurred, never hurt a bit. 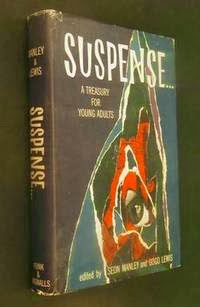 Michel Parry, as his name might suggest, probably didn't begin speaking in English first (he was born in Belgium)...and, as his list demonstrates, didn't by any means restrict himself to YA anthologies. But that didn't stop him from putting together excellent books that were both slotted and collected for the young readers that included me in my youth:

...albeit an X certificate on films in the UK was likely to be handed to any sort of horror film, at least until the 1970s, whether with Hammer-style sexuality or not. Beware of the Cat was a fine start, if obviously missing a Fritz Leiber story:
I definitely would've appreciated seeing the Mayflower Books series as they were being published...as it happens, I still haven't. No US editions aside from the first, I gather.

And that first was from Taplinger, which also did a number of the anthologies of Hugh Lamb, whom (when first encountering his books ca. 1976) I rather inexactly used to think of as a sort of protege of Peter Haining, given that Haining's books seemed more numerous, in similar editions frequently, and he would pop into the odd Lamb anthology to provide a guest introduction. But while there were similarities in the compilations, Lamb was even more an assiduous scholar than Haining, digging out lost stories (most famously an M. R. James, early in his career) and generally going even wider into stories which were less-traditional horror and more bizarre psychological studies, for his anthologies of the weird...

My first Lamb, I believe, was A Wave of Fear...Lamb, more than any other editor, introduced me to the brothers' works, the Other Bensons, alongside the brilliant horrors of E. F. Benson (best remembered in the '70s and perhaps now for his relatively sunny comedy of manners novels about Mapp and Lucia). 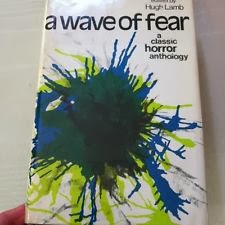 I have several of the Manley & Lewis anthologies primiarly because of the fantastic Edward Gorey artwork on the DJs. I've been trying to get a full set for years now, but never had a complete list of titles. So thanks for these bibliographies. I am intrigued by Helen Hokes' colelcitons and will start my hunt for any of those this year.

WorldCat can be trying at times, but it also by its nature tends to turn up things that many others miss unless they are paying extremly close attention to their subjects...I must admit that seeing that Hoke died of pneumonia in an elder-care facility was a sad thing to learn, when first seeing her obit last night. No matter what you've done in your life...it's unlikely to end too terribly well.

I love the Ed Gorey covers, Todd. Those are what I noticed first. I don't read anthologies - don't know why - never got into the habit, I suppose. But it was interesting seeing some of the names of a few authors I've read over the years.
And thanks for the reminder that E.F. Benson wrote the Mapp and Lucia books. I'd been meaning to add those to my all over list. But you know how this memory of mine works - not at all! :)

So many great anthologies listed here, Todd. Many of the Hoke and Manly/Lewis books were not available at my local library when I was a kid, so I'm still playing catch-up (and enjoying it!).

Yvette--you're not the only person I know who won't read anthologies...though most of them boycott all short fiction. I can't imagine it. It is remarkable the degree to which the best writers of horror are often also very deft wits.

Jerry--indeed...I'm almost surprised how much each editor has done that I haven't yet seen. Perhaps, I, too, should be catching up via library, at least for some of these...

Add me to the list of Gorey fans. Those Helen Hoke collections are unfamilar to me. I wonder if they were more widely circulated in the UK?

A few might've been, but I was always able to find a Hoke anthology in the better libraries I visited in the '70s...she was a bigger deal over here.

Just been re-reading Shirley Jackson's short stories and fascinating to read about these shall we say 'complimentary volumes - thanks Todd.

Yes, it'll be interesting to see how many will jump on which stories by Jackson for Patti's FFB week...

Anyone know any personal details about Seon Manley and Gogo Lewis? Birth/death dates, etc? All I've found out so far is that the two women were sisters; that Seon's maiden name was Givens (and then so presumably was Gogo's); and that Seon was born in 1921. And I think that Seon lived in East Patchogue NY at one time.
-Bill Lloyd

Well, Bill Lloyd, such ace librarian/researchers as Michael Stamm and Dennis Lien have been on the case since I asked around, and they in their first passes haven't found more explicit data yet than you have, but have come across at least these references that you might look to, if you haven't already:

The absence of information on her and her sister is remarkable. One source, a genealogy website called Geni, gives their parents as Webster and Carolyn Givens, and the sisters' birthdates are estimated as somewhere between 1903 and 1963; a range like that is so broad as to be almost meaningless. I have a few of their anthologies; I'll be interested to hear if more information is forthcoming.

Something about the Author. Facts and pictures about authors and
illustrators of books for young people. Volume 15. Detroit: Gale
Research, 1979. [SmATA 15]

Thanks, Amy and Marilyn! TM

Seon Manley's husband Robert Manley died in 2013. She is named in his obituary but no other biographical details are available. A daughter of Robert's is named, but it appears that Seon is not her mother.

I found this entry on ancestry.ca

Wow! thanks, to all! that's very helpful. The reason I was asking is that I'm working on filling out the author profile for Seon (and now Gogo and Robert) on LibraryThing. http://www.librarything.com/author/manleyseon&recalculate=1&check=3084268479

Still can't find Seon's death date but I did narrow it down to between 1986 and 2006. She was an editor at Vanguard Press from 1959-1986 [see Vanguard Press on wikipedia] and she died no later than 2006 when I find her in a memorial list on a church bulletin.

Thanks for getting this started, Bill...with some new data provided, I'll be putting together a new blog post tomorrow, when I hope to fell a little less under the weather. Turns out the sisters' brother in law was Eugene O'Neill's damaged son Shane, for example, among other colorful bits...

Thanks for pitch-hitting for Patti! You always do a top-notch job with FFB! I love the anthology with the Gorey cover!