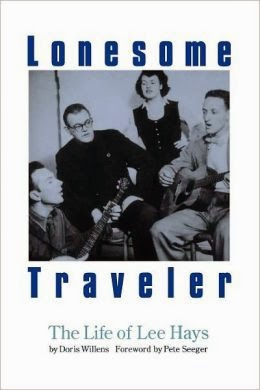 from the FictionMags Index: 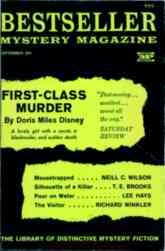 The text of "Pour on Water" as published in Bestseller Mystery Magazine, 9/59.

I started reading, in what's turned out to be a very busy week, Doris Willens's biography of Lee Hays, with no precognition that it would be the week we'd lose Pete Seeger, Hays's longest-term collaborator in such projects as the Almanac Singers, People's Songs and, of course, the Weavers...they also wrote together, most famously "The Hammer Song" or "If I Had a Hammer"...a modest success in the Weavers' recording but one of their most commonly covered songs, and among the biggest hits Peter, Paul and Mary, and Trini Lopez, would have.  The nephew of Vance Randolph (the folklore collector who published notable collections of Ozark Mountains-dwellers and others' stories and songs beginning with The Ozarks, 1931), Hays faced early tragedy (in Hays' teen years, his father died in an auto accident, leading his mother to retreat from reality and be institutionalized; Hays began the first of many periods of couch-surfing, mostly with siblings, one of whom got him a library job which led indirectly to his radicalization and lifelong interest in social justice issues and activism).  Hays would spend most of the rest of his life trying to overcome his own emotional baggage as well as the very real sorts of threat that his fellow Southerners, among other sorts of yahoo very much including the Red-baiters of the turn of the 1950s, could pose; meanwhile, he would throw off sparks in all sorts of ways, in writing dialect-heavy short stories for Fredric Dannay and Robert P. Mills at EQMM and Bestseller Mystery when the mood struck him, in his various organizational activities around folk music and otherwise (in the mid-'50s doldrums after the blacklisting had temporarily sidelined the Weavers, Hays recruited his biographer, Doris Willens, then Doris Kaplan, a new mother and temporarily on maternity leave from a journalism career, and actor/writer/musician Alan Arkin and members of Arkin's family to become the Baby Sitters, who would record at least four albums-worth of folk music, including their own compositions, for children), and yet, as Willens notes, he never did get around to writing the autobiography he easily could have, and as Seeger would repeatedly note, his old bandmate would consistently badger Hays into one project or another after the latter's retirement from performance, including writing the script for the documentary The Weavers: Wasn't That a Time!

What a person can accomplish while waiting, sometimes rather irritably, for other things to happen, is one of the lessons of this book and Hays's life...the points should be taken. And Hays's stories about the villainous (or at least severely mischievous and arguably justified) Opal (the boy) and Sam (the girl) should be read...the example linked to above is short and eminently worth reading, particularly for those looking for something somewhere between Walt Kelly and James Lee Burke in appeal... 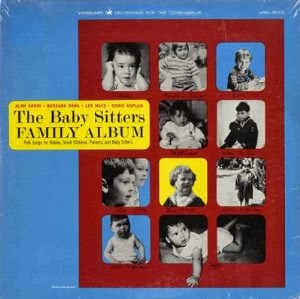 Those older EQMM covers used to have a very stylized look like the one on your posting today. I rarely find those old EQMM issues anymore. I donated my small collection of them to SUNY at Buffalo.

Yes, for whatever reason the Salter covers he did for the early EQMM tend to look rather awkward, at best, to me, the whimsey strained...he was much more in his element with the early F&SF covers. I was surprised to see the earliest issues, when I first obtained a few, were saddle-stapled rather than perfect-bound, as the magazine has been since.

They soon folded MERCURY MYSTERY and BESTSELLER MYSTERY (after combining the former with the latter) at Mercury Press after selling EQMM to B. G. Davis, as he was leaving Ziff-Davis to found Davis Publications, and I often wonder why they thought that was a sound business decision, given how the cf magazines rather consistently outsold the sf/fantasy magazines in those years. They certainly weren't compelled to keep the Whole Novel (often abridged) in each issue gag going...particularly with EQMM no longer demanding any first refusal on short fiction in-house.