FFB: CRIMES AND CHAOS by Avram Davidson (Regency 1962); GATEWAYS TO FOREVER: THE STORY OF THE SCIENCE-FICTION [AND FANTASY FICTION] MAGAZINES FROM 1970 TO 1980 by Mike Ashley (Liverpool University Press 2006) 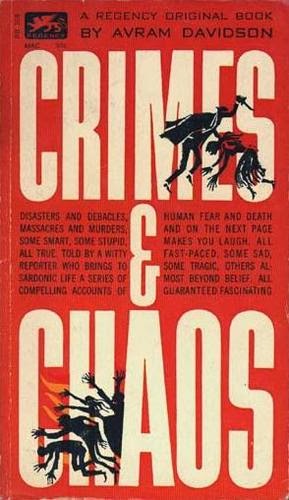 A considerable augmentation to a contents list at Goodreads; all the previously published work (with uniformly fiddled-with titles) had been published in one of Fawcett's men's sweat magazines (probably mostly if not all in True, one of the industry leaders), but it's significant that rather than a Fawcett original, this was published by Regency, the paperback arm of the same publishing folks who had started with sf/fantasy magazines (notably Imagination and Imaginative Tales) and eventually gave them up in favor of concentrating on Rogue, one of the better Playboy imitators of the '50s and '60s...and in the '60s made their way from Chicago to Los Angeles and started the Greenleaf line of porn novels and nonfiction work that raised the ire of the Nixon Admin, leading among other things to editor Earl Kemp's imprisonment on ridiculous charges...an obscenity, though not on the part of Earl. It probably didn't help, for the purposes of taking the manuscript from one office at Fawcett to another, that Davidson once had burnt a hole in Fawcett Books editor Knox Burger's suit with careless cigaret handling; this during a conference in which Davidson and Harlan Ellison nonetheless did manage to sell Burger on a proposed crime-fiction novel, still unfinished and much loathed by Ellison, with a working title of Speak Not of Rope (this data from the memoirs around the Davidson/Ellison collaboration "Up Christopher to Madness" in the collection of Ellison collaborations, Partners in Wonder); Ellison was editing Regency Books at the time this was put together (hence, in part, the slogan on their titles "Regency Books Mean Controversy"); among the projects hanging fire when Ellison was replaced by publisher William Hamling (Ellison's friend Algis Budrys was brought in, and the upshot of the hassle alienated Ellison from Budrys and Kemp for decades) was an anthology of new fiction with Controversial themes, to be edited by Judith Merril...this of course was the seed of Ellison's 1967 Doubleday anthology Dangerous Visions, and perhaps also partially sparked Merril (and certainly to interest publisher Doubleday in encouraging her) to eventually supplement her adventurous Year's Best SF annuals (for Dell/Delacorte) with England Swings SF (1968; reprints, but most of the contents not previously published in the US).

7 - A Rain of Burning Girls (originally published as "The Day It Rained Burning Girls") 1961 (about the Triangle Shirt-Waist Co. fire--the PBS American Experience documentary about this horror will be repeated in February)
23 - The Furniture Fellow ("The King of the U.S.A.") 1959 (Al Capone)
49 - Midwife to Murder ("The Riddle of Jack the Ripper") 1960 (guess who?)
64 - The Forgotten Soldier ("Greatest Soldier in the AEF") 1960 (Samuel Woodfill)
77 - The Death of the Henry Clay ("Death Duel of the River Kings") 1959 (steamboat racing accident)
90 - Beer like Water (Yonkers' Prohibition sewer mystery) --no previous publication information cited
106 - The Men who Killed the Brigade ("The Day the Light Brigade Died") 1961 (Charge of the Light Brigade)
124 - Little René ("The Man Who Killed Devil's Island") 1959 (A decade before Papillon, which was not about René Belbenoit)
141 - The Last Excursion (the sinking of the General Slocum) --no previous publication information cited

Davidson, as Algis Budrys noted in his review of AD's Masters of the Maze for Galaxy magazine (see the Budrys collection Benchmarks: Galaxy Bookshelf) was famous among his puzzled colleagues for taking the initiative to rather extensively and sometime relatively expensively research his historical articles for the likes of True, which often didn't worry about how true a contribution was if it was sufficiently hairy-chested (albeit True was less prone to this than almost all its competitors, they celebrated considerably of late...the Fawcett magazine not actually averse to, and editors such as Ken Purdy were apparently appreciative of, Davidson's efforts).  The essays as presented in this book have been revised for collection, though perhaps that mostly means the editorial cuts and rewrites to make them more like the typical run of the magazines' contents have been excised, the cut material re-added. Davidson didn't write as personally, for obvious reasons, in this work as he would in much if not most of his fiction, or the later Borgesian essay/fictions of Adventures in Unhistory. But these works are elegantly and compellingly told, and pain can be felt, the humor where appropriate or needed in place; I've been meaning to read this book for decades, and finally got around to buying it online, and picked it up at the end of a very long day and made the mistake of starting the Triangle essay...there was no stopping till I finished it in the very small hours. Davidson's sorrow and rage are still very alive as he recounted the incident (even if the endless use of "girls" to refer to women does sound strange to me now...though I wonder how many of the younger women were actually girls, it seems as if not too many), and the quiet stress (in both senses) in noting that the NYU building next to the still-extant building which had housed Triangle, to that turn of the 1960s day, continued to have insufficient fire-emergency egress. It remains insane that this is the only non-chapbook of Davidson nonfiction published either during his life or since...and this one never, as far as I know, reprinted after the death of Regency (the end of the romance...). 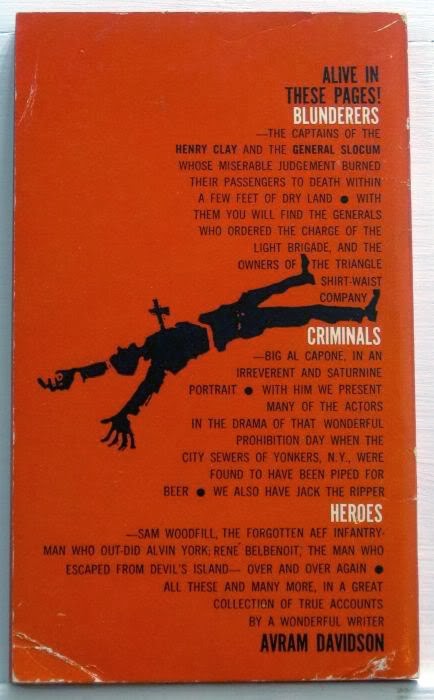 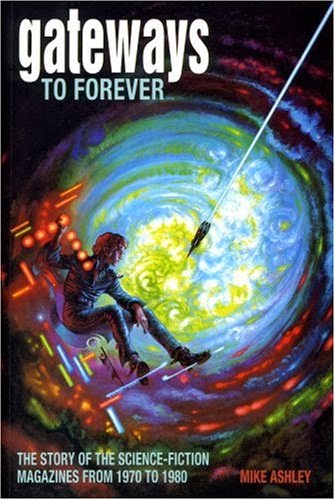 Mike Ashley, for his part, has been editing anthologies and researching the histories of fiction magazines (even if he does here try to lump in fantasy magazines under the rubric of sf) to a greater extent than nearly anyone, for the last four decades and more...his multivolume enlarged and upgraded account of the development of fantastic-fiction magazines over the last century has managed to recomplicate and grow ever larger (even as he attempts to throw in only the most important and pertinent of related developments, which leads to a few slight but understandable distortions at the edges...for example, he assumes that the Warren magazines (notably Creepy, Eerie, Vampirella, but also Help!, Famous Monsters of Filmland, Spacemen, etc.)  were the first to publish horror comics again after the Comics Code was created in the mid 1950s...that honor actually goes to Dell, of all publishers, which never joined the Code Authority because their comics were so obviously wholesome (and perhaps because George Delacorte didn't enjoy being bullied by the Archie Comics folks), but who saw an empty market niche when it was glaring and began publishing relatively clever horror comics in 1962--though Dell wouldn't become too terribly relevant to Ashley's subject matter at hand till after the sale of the Davis Publications fiction titles to their old paperback partners at Dell in 1992...Dell had been publishing Alfred Hitchcock's Mystery Magazine best-of anthologies for decades, and now published the magazine Davis had bought in the mid '70s, after a disastrous gamble on a Sylvia Porter consumer-affairs title nearly bankrupted Davis, leading to the liquidation of his firm. Though before finally beginning to read my copy of this fourth volume in what is currently projected to be a five-volume series (for now!), I didn't know all of what put Universal Publishing and Distributing in such a tailspin in the mid 1970s...a mixture of selling, too hastily, their real moneymakers Ski and Golf magazines and taking on the sinking ship of an upscale lifestyle magazine of which they had only had partial ownership before...this led, in large part, to the shuttering of If magazine and the subsequent slow slide into folding for Galaxy magazine, despite editor James Baen managing to pump new life into the magazines, and gaining contributors ranging from Joanna Russ to Isaac Asimov to Larry Niven and Jerry Pournelle for the magazines, again or for the first time. The '70s, as this blog repeatedly demonstrates, was the decade in which I grew passionate about fiction magazines, so you know I'm the audience for this book...and if you have to wonder what might actually interest someone less invested than myself, be aware that the cover painting used by Ashley here was originally painted by Frank Kelly Freas (who also painted the Astounding cover used, in slightly altered form, by the rock band Queen for their News of the World album cover, the one most folks remember) for a story by George R. R. Martin, who's gained some readership in the last few. Ashley finds himself dealing with OMNI and the other pop-science and non-pop magazines adding some fiction into their mixes, gaming magazines, Heavy Metal and to some extent other comics magazines, and the efflorescence of anthologies of first-publication fiction...and writes in a breezy and enthusiastic style that incorporates his footnotes well, and has only occasionally been typo'd by his university press compositors.  Worth the look for anyone even casually interested in best single source we have on this corner of the culture, and the extensions outward...hell, Ben Bova and Ted White, after spending the decade doing mostly good and better things at, respectively, Analog, and Fantastic and Amazing, walked away at decade's end...only to find themselves editing at OMNI and Heavy Metal, respectively, shortly thereafter, at hefty raises in pay and level of support...and reaching, if less immediately in a sense, much larger audiences...

Regency books weren't distributed much in Western NY. The only Regency titles I found were in Wisconsin. I'll read anything Avram Davidson was involved with.

Did you have a very corrupt distribution mafia waiting for payoff up there?

Ashley has done some really marvellous work but I don't have this volume or any of the others in his history - I clearly must remedy this - thanks ever so much Todd.

Great post, Todd, I read it with grew interest and some memory of that discussed. Why do I think - vaguely - that that Freas painting was originally a cover for a Telsey story?

Sergio--As I allude to in the hasty run-on sentences above, Ashley produced his first history of the magazines and the field in the 1970s...the newer versions are much better, and he's still putting the last touches on the intended final volume four. Do you mean you haven't picked up any of his anthos, histories or THE SF BOOK OF LISTS and similar works, or simply not his histories? I suspect you will enjoy them, if you like my essentially Lite versions of similar work onblog!

Thanks, Richard...well, he might've done a similar one for a James Schmitz story, but this one was apparently for a Martin in ANALOG...he's certainly done similar work (with the prominent points and all) for F&SF as well as ASF...it's a fun book to read and say yes to this and maybe to that, no to this and then My Goodness to that...

I'd love to track down that Triangle factory story. I've read a few books about the tragedy. I wonder if it's in any other anthologies?

A good question. Oddly enough, very few anthologies (that I'm aware of) seem to have drawn from Davidson's nonfiction...perhaps in part because he so Kilgore Trouted the placement (not, as far as I know, that, say, ESQUIRE or THE SATURDAY EVENING POST or BOY'S LIFE, among better-paying markets than TRUE...or even PLAYBOY or ROGUE, which would publish his fiction...were making the point of commissioning historical articles from AD).

Or All The Seas With Oysters said...

Great blog! If you do love Avram Davidson- A VERY SPECIAL EPISODE of The Avram Davidson Universe is launching on September 1, 2021. Avram will be narrating the story from an archived recording. Please spread the word, especially to those who knew and loved him.