FFB: COLLEGE PARODIES edited by Will and Martin Lieberson (Ballantine 1961) (and a bit about I, LIBERTINE by Theodore Sturgeon and Betty Ballantine) 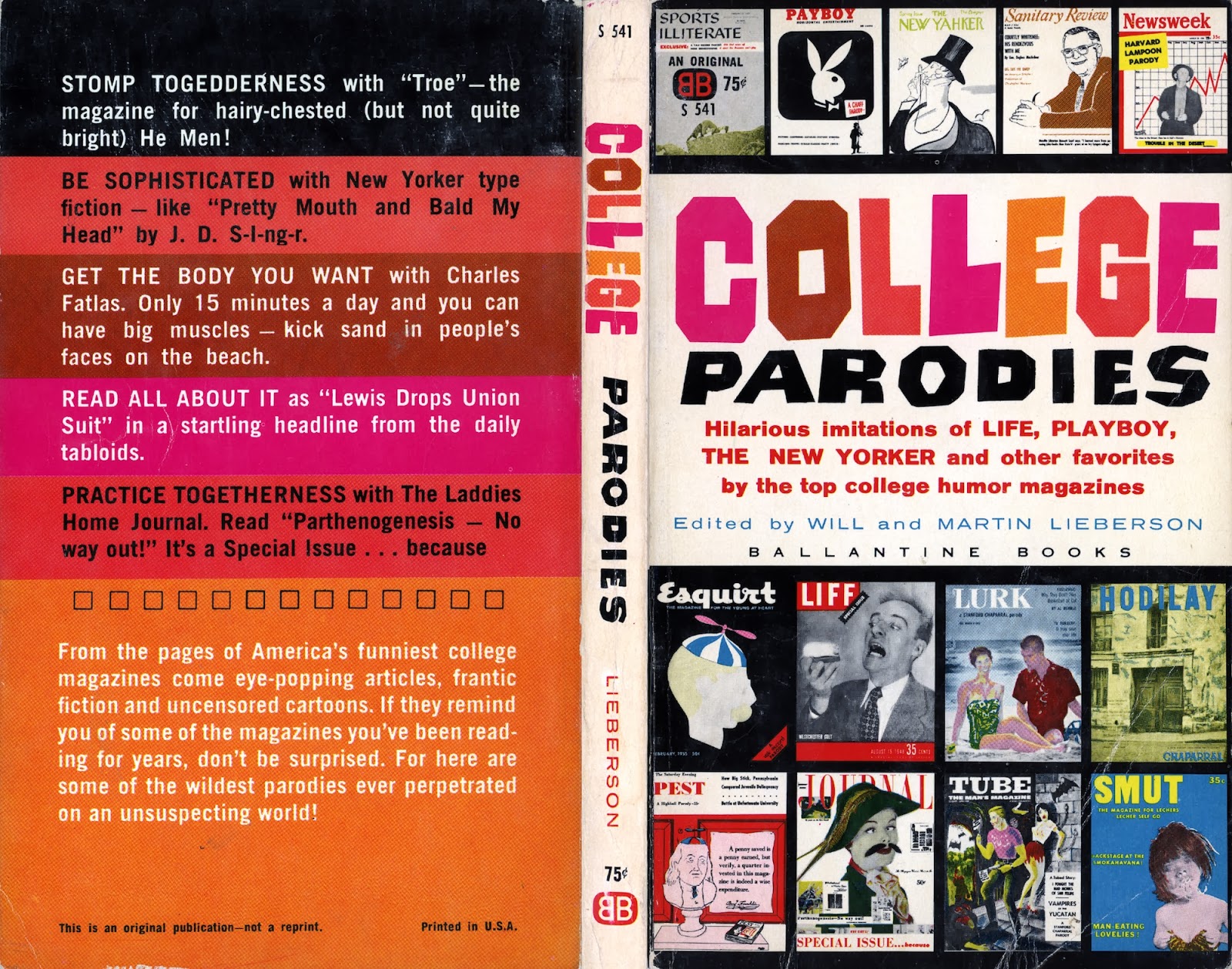 Ballantine Books was always ready to be an innovative publisher, in the years that Betty and Ian Ballantine were in charge...sometimes the execution was less impressive than the inspiration, but they had smashing successes with publishing collections of the first years of Mad comics, while Harvey Kurtzman was still editing and mostly writing the title, and such famous comic hoaxes as I, Libertine by "Frederick R. Ewing" (where Theodore Sturgeon and Betty Ballantine wrote a novel in a marathon session, to quickly publish after New York City-based radio host/storyteller/comedian Jean Shepard asked his listeners to go ask booksellers for a nonexistent book, to see if they could get a nonexistent joke onto then as now corruptly assembled "bestseller" lists; Shepard and Sturgeon did a first edition signing in a drugstore). So, it was only natural that other such projects should arise, such as Harvey Kurtzman's 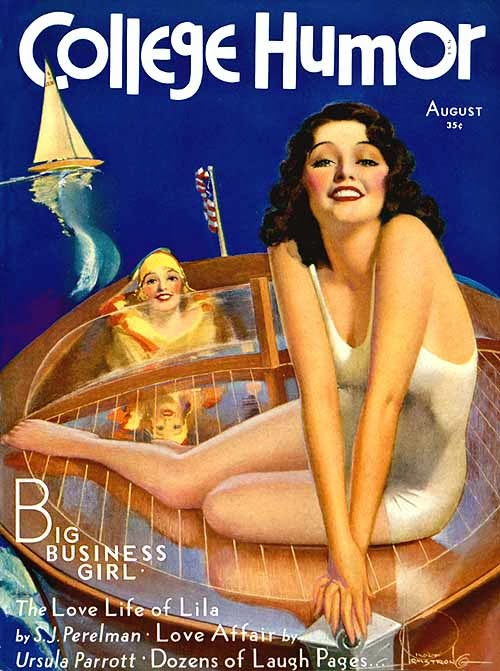 Jungle Book...and this volume, collecting mostly magazine parodies from the college humor magazines that had preceded Mad into existence, and in fact had already been gleaned for a 1920s newsstand magazine, College Humor, a spiritual though not direct ancestor of the current website of that name. Although The Onion began as a UW Madison-based publication, the Harvard Lampoon has been probably the (otherwise) most famous and the most durable of these campus magazines in the U.S., as well as the direct inspiration for the National Lampoon in the 1970s, which has left a legacy at least as large as that of its parent, which survives it (and Harvard staffers have certainly gone onto post-collegiate comedy careers in an old-grads-club, usually old-boys' sort of way, particularly on the writing and production staff of  various television series; a slightly amusing prefiguring of future interaction occurred at Harvard when future NBC television CEO Jeff Zucker, as head of the campus paper the Harvard Crimson, had Lampoon editor Conan O'Brien arrested for a prank the magazine staff played on the Crimson staff and their product). But certainly most colleges and universities of any size or wherewithal were likely to have at least a mayfly humor magazine from time to time; the UC Berkeley Pelican published Ron Goulart's piece "Letters to the Editor," a parody of a letter column in an sf pulp, that was reprinted in an early issue of The Magazine of Fantasy and Science Fiction as Goulart's first professional sale, and the Yale Record and any number of other titles managed to flow, with no lack of sophomoric humor usually wrapped around any gems, through the last century (the tradition is even longer in the UK, unsurprisingly, where it gave early training to staffers for Punch and so many other magazines and other entities over the decades).  Not long before Borders Book Stores folded, the were carrying the current Harvard Lampoon on their newsstands, and sadly, it wasn't brilliant, for the most part...but, then, I haven't been a fan going back at least as far as their Bored of the Rings, the parody of Tolkien reprinted widely in mass-market paperback in the wake of JRRT's massive success in the latter '60s onward. 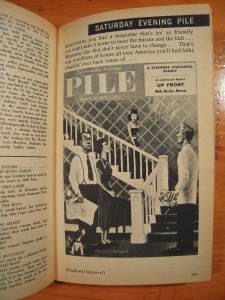 A certain lack of brilliance also afflicts College Parodies, as fitfully amusing as it is (and was even when I first read it as a young teen and Mad enthusiast), and as interesting as a curio of its era (it mostly reprints 1950s items from the various campus magazines, with perhaps a few earlier parody bits); it's a sort of fun to see what's mocked (complacency, manfulness, "corn") and what isn't (homophobia certainly rules OK) in the assembled humorous critiques of mass-market culture (from a period when the magazines parodied were somewhat more central to the popular culture than they are today, even if the websites that are their heirs or even sometimes their direct legacy are somewhat similar in influence now). Some of it remains on-target, at least for me..."Normal Wellwell" and the Charles Atlas ads fairly begged for the treatment they receive...even when it could've been better. But often these were early, even the first attempts to make some of these points this way, or nearly this well...definitely a book to look at if this kind of thing holds interest for one as a student of our popular culture, rather than a book to seek out as a Laff Riot, and not worth pursuing if expensive. 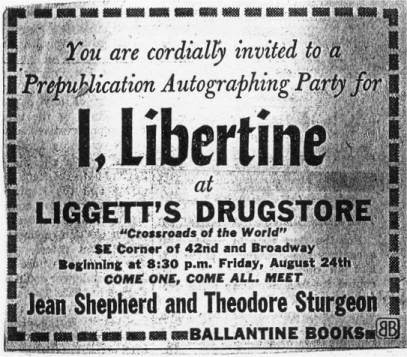 For more on parody and humor on this blog, very much including the comics tradition (in at least two senses), please see this post, which collects most of the others published so far.

The cover is the best part of I, LIBERTINE. That whole genre of college parodies seems to have vanished. I remember reading issues of THE HARVARD LAMPOON. Everything humorous seems to have migrated to YouTube.

Well, the HARVARD LAMPOON is still published as a magazine, as is THE ONION (and MAD, and a small slew of others), unless something has changed in the last year or so and I've let that get by me (happily, no, in these cases). But, indeed, most people certainly access THE ONION on the web, along with CRACKED.com, COLLEGE HUMOR, FUNNY OR DIE and quite a few more...I wouldn't be surprised to agree with you about I, LIBERTINE, given it was hacked out exhaustedly to fulfill a joke...copies tend to be pricey, and I'm not enough of a Sturgeon completist to pay through the nose for that nor the novelization of THE VOYAGE TO THE BOTTOM OF THE SEA.

I was disapponted in I, LIBERTINE when I found and read a copy 20 or so years ago, even though I was both a Sturgeon completist and a big fan of lampoons and parodies generally. Aside from the cover, I recall being impressed only by the first page, which had a joke (as I recall) about the hero being a "coming man" which after being emphasized a couple of times was topped with his hostess asking him "Going so soon?"

As lampoons of this sort of novel go, I don't think I, LIBERTINE can hold a candle to Robert Ruark's GRENADINE ETCHING (1947), which I read in a 1960s Ace pb reprint. Incidentally, the latter has some fantastic content (an intelligent ape who at one point speaks; a disaster that sinks an entire continent), so it should be listed on bibliographies of sf/f published by Ace Books, even though I don't think I've ever seen one that does list is.

On anthologies of bits from campus humor magazines, there was a short-lived (only four or five issues, I think) newstand magazine in the early 1960s which I bought when I could find it which worked on that premise. I think the title was originally COLLEGE HUMOR which after an issue or two changed to COLLEGE LAUGHS -- or it may have been the other way around. I must still have a couple of them in a box somewhere, but haven't seen them (or any mention of them elsewhere) for decades.

Thanks for the pointers, Denny...I don't think I've ever gotten around to reading Ruark, but that's inspiration (he was one of the more popular war- and adventure-fiction writers at midcentury)...I see GRENADINE was his first novel...and your mention of that 1960s magazine rings the slightest of bells...but I know I've never seen a copy.

And I see that one can get an eBook of LIBERTINE inexpensively now, and that a paperback copy of VOYAGE is less than the last time I looked it up some years ago (even given it's Sturgeon, I hesitate to pay $10 including the postage for that as a reading experience...the old William Goldman line, "You can't wash garbage," comes to mind...I'll probably collect Sturgeon's novelizations of better, western films first: A KING AND FOUR QUEENS, THE RARE BREED...even given their unsurprising reputation as not his best work, either).