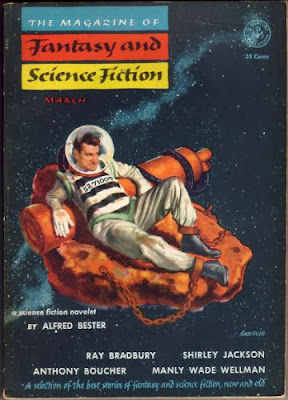 Shirley Jackson, author of one of the most unpopular stories ever published in The New Yorker ("The Lottery", of course, which has utterly outlived most of its outraged critics and subscription cancellers, and, perhaps sadly, sustained a readership that most of Jackson's work has not), and one of the pivotal figures in the creation of the new horror fiction, and the allied suspense fiction (such as that clangorous short), that was emerging in the 1940s, with Jackson along with John Collier one of its progenitors who only infrequently contributed to the fantasy-fiction magazines (unlike Robert Bloch or Fritz Leiber or Margaret St. Clair, whose careers orbited initially around those titles, or Cornell Woolrich or Algernon Blackwood, who were fairly frequent contributors even if their primary markets were elsewhere). As far as I know at the moment (thanks to Matthew Davis's comment below, I've added one--in fact her first for F&SF), only five of her stories were first published in the fantasy markets, somewhat unsurprisingly in the two most sustained fantasy magazines to fully establish themselves in the 1950s, Fantastic (as founded in 1952 and edited by crime-fiction writer Howard Browne) and The Magazine of Fantasy and Science Fiction (as co-founded in 1949 and co-edited, then solely edited, by crime-fiction among much else writer Anthony Boucher, born William White). 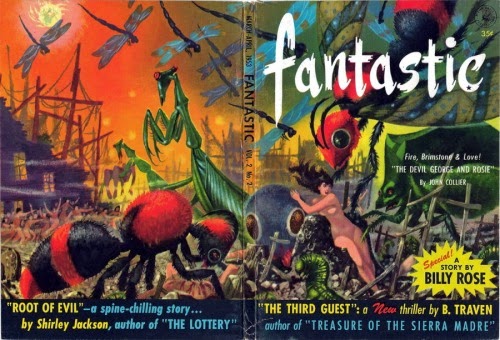 Jackson's "Root of Evil" appeared in the March-April 1953 issue of Fantastic, and publishers Ziff-Davis were feeling cocky enough about their packaging to have a wraparound cover, with Jackson's story advertised only on the back. Richard Powers's unusually non-abstract imagery is fine, and having both B. Traven and John Collier (and, for no compellingly good reason, Billy Rose the Gypsy Rose Lee promoter, who is credited with fiction in other markets at about this time as well) made Ziff-Davis feel they didn't need to properly advise the newsstand browser. Fantastic in those early years was paying very well, indeed, and stunts such as having stories as by Billy Rose and Mickey Spillane in those issues seemed to be paying off, but Ziff-Davis lost their nerve, and Fantastic soon would be hitting a pretty low point by the mid-'50s, though it was still in its way entertaining, as authorities on the scene such as Bill Crider and Mike Ashley can attest (and even under the darkest days of Paul Fairman's editorship, the run of routine stories mostly by Robert Silverberg, Harlan Ellison, Randall Garrett, Henry Slesar and Milton Lesser [before he started publishing most of his best work as Stephen Marlowe]--routine stories by intention, these talented writers were there to deliver it Tuesday rather than good, though if good, no problem--would be supplemented by the finds that Fairman's assistant [and eventual vastly better successor] Cele Goldsmith would pull from the slushpile, such as Kate Wilhelm's first published story, "The Pint-Sized Genie"). ZD's purchase of all rights in those years meant that Jackson's story was also reprinted in one of Ted White's early issues of the magazine, a rather better reprint than most he was offered from the same storehouse at the turn of the '70s (albeit the others in that 1969 issue were pretty solid, as well). 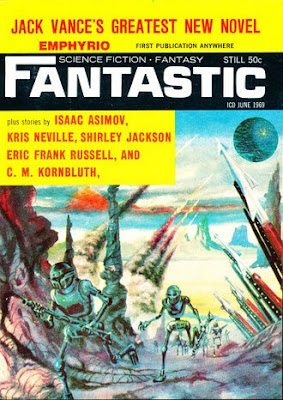 Much of what I was surprised about in the packaging of F&SF issues with Jackson stories below becomes even more surprising when one considers Jackson's first appearance in the magazine, with (as Matthew Fox reminds us in the comments) "Bulletin," part of a very star-studded issue indeed, with impressive stories by Alfred Bester, Manly Wade Wellman, Ray Bradbury and others...and Jackson's name deservedly on the cover. Even though I have this issue, I don't believe I've read "Bulletin" yet...something I should remedy.  (This would be Jackson's only story in an issue while J. Francis McComas was still co-editor; cover is at top of post.)

Publication: The Magazine of Fantasy and Science Fiction, March 1954 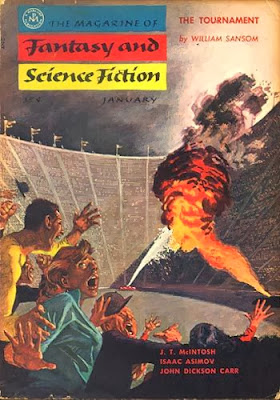 Jackson's second story for the less "slick" and less stunt-driven, more "literary" (in the same sense that sibling magazine Ellery Queen's Mystery Magazine strove to be the most elegant and literate of the cf magazines) F&SF was apparently one she had trouble placing with other markets; as Laurence Jackson Hyman or Sarah Hyman Stewart put it in the clumsily titled collection Just an Ordinary Day, "One Ordinary Day, with Peanuts" sold for peanuts (comparatively...Fantastic at its commercial height was paying 5c/word as a standard rate, and probably a little more to Jackson, while F&SF was more likely to pay 2c/word, again with a bit of a bump--pay rates somewhat reminiscent of the little magazines, as well...this at a time when The New Yorker was paying several hundred 1950s dollars for its short fiction, and The Saturday Evening Post paid five to ten times what TNY chose to afford).

"Peanuts" is a fine story, even though it's not a fantasy so much as a charming story about people causing varying sorts of mischief; Jerome Bixby's vignette "Trace" would take the same sort of framework and make it unadulterated fantasy, but Boucher rather doubted, apparently, that his readers would mind a not-quite-fantasy by Jackson in their pages. This set up a precedent for two further Jackson stories in Boucher's F&SF, "The Missing Girl" and "The Omen". Though it's notable that Jackson's name is again not on the front cover for the January, 1955 issue, with William Sansom (a rather slick writer of sf and fantasy, who would contribute to The Saturday Evening Post or Playboy at least as often as to fantasy magazines), J. T. McIntosh (once a great F&SF favorite), Isaac Asimov and John Dickson Carr getting the lines instead... 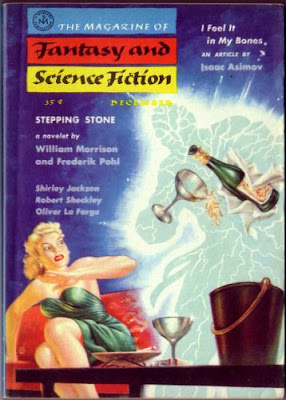 At least by her third appearance, Jackson's credited on the cover...and her fourth and last original publication in F&SF was given an almost solo credit, along with Jane Roberts (most famous for "Seth" "nonfiction" but a fairly prolific contributor to the magazine in the 1950s).

Publication: The Magazine of Fantasy and Science Fiction, January 1955


Publication: The Magazine of Fantasy and Science Fiction, December 1957

Publication: The Magazine of Fantasy and Science Fiction, March 1958
Though it's notable that when F&SF readers were polled for their favorite contributions from the history of the magazine, for an all-reprint-fiction 30th Anniversary issue, they chose the non-fantasy, non-sf story by Jackson over the later entries...it would be further reprinted by the fantasy magazine Twilight Zone a half-decade later, and Richard Lupoff would include it in his first volume of stories that probably should've won the Hugo Award...but, then, her heirs almost managed to name the collection of her uncollected stories after "One Ordinary Day..." as well.

The first story of hers I read was "One Ordinary Day, . . ." in the issue of F&SF you've pictured.

For me, it was probably "The Summer People" or "The Lovely House" or even possibly "The Possibility of Evil" in one or another horror or "Hitchcock" anthology. They made an impression.

Like Bill, I read "One Ordinary Day" in that issue of F&SF that you show. I was just a kid when I read it so it shocked me.

I can see how it might! I think I was more in tune with her tricksters by the time I first read it.

I didn't first read "One Ordinary Day, with Peanuts" in that issue of F&SF (I was -4 at the time) ... probably first saw it in a one of the Best from F&SF anthologies ... but I loved it from the first, a true favorite of mine.

I'm happy to see that it hasn't been ignored -- Martha Foley picked it for her Best American Stories that year, as did Merril for her anthology that year, and it's been in a couple of doorstop fantasy anthologies, plus Richard Lupoff's excellent What If?

And most of that w/o actually being a fantasy story. But FANTASTIC and F&SF published a fair amount of stories neither fantasy nor sf over their runs, and F&SF might occasionally still.

Todd, I'd no idea Shirley Jackson's stories appeared in sf and fantasy magazines. I have read very few of her stories and I'm somewhat convinced that she aimed to shock the reader. I suppose one can read all her stories and novels in no specific order.

Well, aside from the two memoirs of child-rearing, I don't think she ever attempted a true sequential narrative, so jump in at will. Most people will point you to THE HAUNTING OF HILL HOUSE and/or WE HAVE ALWAYS LIVED IN THE CASTLE first among the novels. And, of course, since she's writing horror and suspense fiction a fair amount of the time, trying to shock the readers comes with the territory. Shaking up their perceptions can sometimes be best accomplished that way. She wrote gentler stories, too...

For me the first was almost certainly"The Lottery" which is not a surprise given how little-known she otherwise was in Italy and the UK int he 1970s. Thanks for this superb look at her surprising publications in the SF world (and I hope next week is a better one for you and yours chum).

Thanks, Sergio...though I'm not sure I'd call her appearances in the two magazines at all surprising , even given the F&SF stories' relative lack of fantasy content (though perhaps THE NEW YORKER and MADEMOISELLE bouncing "One Ordinary Day..." was a bit of odd foolishness on their part). Howard Browne's FANTASTIC managed to publish a decent B. Traven in the same issue, and some of the best of Robert Sheckley's stories; Cele Goldsmith not only first published Wilhelm but Ursula Le Guin, Thomas Disch, and (admittedly after one story in COSMOPOLITAN and not a little poetry) Sonya Dorman's prose, and that of a slew of others; Ted White's FANTASTIC introduced not only the likes of John Shirley but also was the second, after AMERICAN REVIEW, publication site in the US for Ian McEwan. F&SF's record of publication of almost everyone who's done something fantasticated verges on the ridiculous, and very much includes people ranging from Vonnegut to Stuart Dybek to Ellen Gilchrist to Shinichi Hoshi to Bruce Jay Friedman to C. S. Lewis to, of course, Joyce Carol Oates.

John Ciardi and I have published one poem each in F&SF. Ciardi's is better, though mine is a haiku.

Great post. Jackson is a favorite of mine, and I was unaware of her stories for these old magazines. I've added them to my list of things to search for when I do some of my hunting.

I think you may have missed one: "Bulletin," in the March 1954 Magazine of Science Fiction and Fantasy. It’s a very brief piece - humorous notes about the future by a missing time traveller .

Thanks to you both, Kelly and Matthew...I'm not sure how I missed "Bulletin," because I've certainly looked right at that cover before, though not in a while...Alfred Bester's impressive short story "5.271,009" was written around that painting. (A much better story than painting, I'd suggest.)